A Review of City of Fire by Laurence Yep

As the jacket points out, Laurence Yep is a two-time Newbery Honor Award winner. I really liked his sea dragon series. It's also nice that Yep gives us Asian-influenced fantasy and Asian characters, since fantasy often seems to be populated entirely by white children. So when the publisher offered to send me Yep's new series starter, I was happy to get my hands on it. 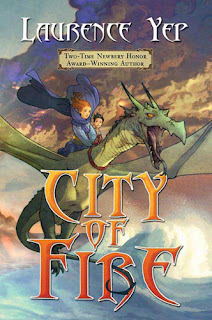 City of Fire introduces us to an alternative version of San Francisco in 1941. In this world, dragons take human form, and a well-to-do diplomat's daughter named Scirye has a lap-sized talking griffin named Kles. Her family represents the ancient kingdom of Kush. At a museum exhibit of Kushan artifacts, we meet the rest of our cast of characters—a boy named Leech, his companion Koko, and a disguised dragon named Bayang whose mission is to kill Leech.
When the exhibit is attacked by a huge dragon and other monsters, Scirye's warrior mother and sister fight back, but Scirye's sister is killed and the exhibit is robbed of a strange ring. Determined to avenge herself, Scirye impulsively steals a magic carpet and, with her new companions in tow, sets out to chase the dragonish thief.
Their first attempt to retrieve the ring fails, so our heroes must stow away on a plane headed for Honolulu, having realized that the thief is working for a wealthy and powerful man named Mr. Roland. On the island they meet a new ally, the goddess Pele. But even she might not have the power to stop Mr. Roland, who is planning to retrieve the Five Lost Treasures of Emperor Yu—for nefarious purposes, obviously!
Certain characters are particularly fun: while Pele may seem like a stereotype to some, I thought she was a hoot as a raucous, pidgin-talking, casually powerful Hawaiian deity in human form. Koko has an intriguing secret, and we do finally learn the mystery of Bayang's pursuit of Leech, who turns out to have magical powers of his own. Yep's world building here is another plus, with the retro vibe of the 1940s combined with an alternative Asian history to give the story a fresh fantasy feel.
Although the book is written in third person, alternating chapters give us the story from the points of view of Scirye, Bayang, and Leech, an approach I think enriches the narrative.
My only hesitation about City of Fire is that it seems to rely more on plot and setup than on character development, but I think that may simply be true of this type of series. For one thing, it's hard to juggle a large cast and give each character much depth. We do learn that Scirye is klutsy compared to her sister and feels she has something to prove and that Bayang begins to question her mission, but Leech is a little harder to get a handle on. I guess I didn't feel as strong a connection to these characters as I would have liked. However, as the series continues, Yep will no doubt add further nuance to his key characters. In the meantime, this series, with enough action to satisfy fans of Rick Riordan's Percy Jackson books, is off to a very good start.
Posted by Kate Coombs at 10:00 AM