A Review of Boom! by Mark Haddon

Yes, this is by the author of The Curious Incident of the Dog in the Night-time, and no, it's not anything like that. Well, it does star a boy in an ordinary British town, but that's about it. Boom! is a re-release (albeit revised) of a book published in 1993 called Gridzbi Spudvetch! That title alone should help you understand that despite the "explosive, hilarious adventure for all ages" marketing blurb, this tongue-in-cheek sci-fi offering is really perfectly suited for boys ages 9-13. 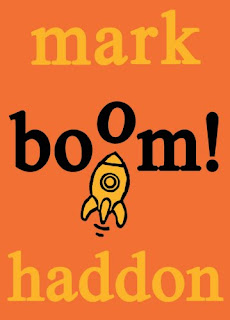 Jim is the narrator of the first-person tale and Charlie is his best friend. As our story begins, Jim is on the balcony of his family's apartment eating his latest creation, a Red Leicester and gooseberry jam sandwich—which he proceeds to drop on the head of his teenage sister's thuggish motorcycle-riding boyfriend Terry, AKA Craterface. Craterface threatens to kill Jim, and Becky calls him a little toad. Later, she tells Jim she overheard one of his teachers saying he was going to be expelled from school. While Jim is pretty sure Becky is just making it up to get back at him, he's worried enough to tell Charlie. And Charlie's been dying to try out his walkie-talkies, so he sets one up in the teachers' staffroom to find out what's going on with Jim.

Except, the boys overhear more than they bargained for when two of their teachers start talking in a strange language. Intrigued, Charlie begins to spy on the teachers, and he ropes Jim in to help him. As the clues pile up, strange men in suits start threatening the two boys, and then Charlie disappears. Jim is determined to rescue his friend—if he lives long enough to do it.

Plot-wise, this book is a giddy ride, with the spoofiness getting especially extreme when the boys meet up with the aliens on their home turf. (Funniest thing ever: the kind of people being kidnapped by aliens. Okay, Becky getting all protective about her despised younger brother produces some very funny moments, as well.) The plot is not astounding, but it does give Haddon a chance to do what he does best, which is to write appealingly quirky British characters. For example, we get Jim's father, who has lost his job and is being unmanned by his wife's sudden success in the workforce. First Jim's dad plays with model planes, and then Jim buys him a cookbook, with happy results. Haddon is especially good at writing boys. Here's a little of Jim's narrative voice as he considers the dangers of bugging the teachers' staff room:

Worst of all we might be found by the caretaker. When Mr McLennan caught the Patterson twins in the athletics shed last year he simply pretended he hadn't seen them and locked them in overnight. He was very nearly sacked but the headmistress reckoned it would cut down on vandalism if everyone knew there was a dangerous lunatic looking after the school buildings...
Besides, two people wanted to kill me. A secateur-wielding cook and a kung-fu death metal biker. One lived at Charlie's house and the other spent a great deal of time at our flat. In the greater scheme of things the athletics shed was probably the safest place to be.

Boom! is a quick read, a mere 191 pages. (Have you noticed that a lot of books are now printed with line spacing of 1-1/2, not 1? Which makes them seem longer than they are...) This may not be a rich book, but it's a fun one. The climactic chapter titled "The Big Knobbly Stick" is especially amusing in a Grand Guignol kind of way, and not just because it pokes fun at those ticking-clock deadlines in action films. I'm guessing that your 11-year-old son, not being a literary aficionado, let alone one of the many grown-ups who read The Curious Incident of the Dog in the Night-time, will probably like Boom! very much.
Note: I requested this book from the Amazon Vine program. It is scheduled to come out on May 11.
Posted by Kate Coombs at 4:05 PM

I just got this out of the library today and it's now on my to-read in the next 2 weeks list!