A Review of Trance by Linda Gerber

What intrigued me about reading this book was that it left me feeling so sad. And I mean that in a good way! Linda Gerber's Trance has a poignant tone that wraps around you and makes you feel like you've just been haunted. Kind of appropriate for a gray autumn day right before Halloween... 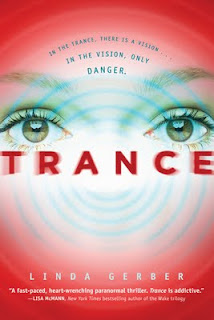 Ashlyn and her mother were in a car accident, and now her mother is dead. Her friend Michelle tries to help her deal with her grief, but Ashlyn secretly feels the accident was her fault, and she's not ready to be comforted. Besides which, her father is barely there, and her older sister has left home, apparently to avoid Ashlyn as well as memories of their mother.

Ashlyn's situation is all the more tough because she and her sister Kyra have powers, and Ashlyn feels like she should have been able to prevent the accident. Every so often, she goes into a trance state and writes strings of numbers (a phenomenon called "trance writing"). Kyra has trances and writes numbers at the same time, even if she's far away. It's only by combining the images they see in the trances that the two sisters can make any sense out of them, and they don't know what the numbers mean at all, despite having done some research.

Ashlyn takes a job working at a mall in a little photo booth, where she gets to know her prickly coworker and the cute guy who works for the music store across the way. But she avoids Jake's efforts to get to know her better, frightened by her trances and her failure to save her mother. When Ashlyn begins to confide in her pregnant coworker, Gina, she learns about a different system of numerology. She's newly hopeful about getting answers, except that without Kyra, how will she be able to prevent a looming tragedy, the accident predicted by her latest trances?

Like Richard Peck's book, Three Quarters Dead, reviewed above, Trance is character driven despite its high concept. The book focuses on Ashlyn's struggle to deal with her grief and to redefine herself. She tries to hide her trances—her fellow students think she's epileptic. Running seems to make her feel better, but then her track coach takes her off the team (supposedly temporarily) after she has one of her "seizures" at school.

In many recent YA paranormals, the main character's trouble accepting her magic/psychic powers and her role as a kind of savior figure rings false, but Ashlyn's worries feel all too real. Trance is nicely paced, alternating between Ashlyn's growing friendship with Gina, her efforts to be patient with her emotionally absent father and to track down her missing sister, and her cautious encounters with Jake, as well as her trances and their impact. Here's a sample of Ashlyn's voice:

My dad and I had a thing when we ran together—we didn't say a word to each other for at least the first couple blocks because that's usually how long it takes to work the kinks out and fall into your stride. When Michelle started running with me in his place, this was a hard habit for her to get used to. Michelle's a talker. For her, keeping quiet for two feet was a challenge, let alone for two blocks. The way she kept glancing over at me that morning, I could tell she wasn't going to make it that far. Sure enough, we barely reached the end of the block before she cleared her throat.

Ashlyn makes an appealing heroine. I really like Gina, too. She has troubles of her own, yet a spicy, sensible approach to life. The scenes involving the photo booth are a lot of fun, with Gina riffing on the absurdities of parents bringing in out-of-control little kids to get their pictures taken.

And then there's Jake, who's a real sweetie, can play the piano, and looks awfully good on a motorcycle!

These days, YA paranormals seem like they're a dime a dozen, but Ashlyn's story is compelling, while the use of trance writing and numerology is a fresh approach to the "teen powers" novel. Trance stands out from the pack, and I look forward to reading the sequel implied by the last few lines of the book.

If you like this one, I also recommend Meg Cabot's Haunted and 1-800-Where-R-You? series.

Note for Worried Parents: Some of you might object to the psychic powers, numerology, and use of Tarot cards in Trance.
Posted by Kate Coombs at 10:15 AM