A Review of Second Sight by Cheryl Klein 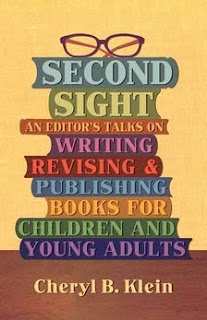 When I heard that editor Cheryl Klein was publishing a book about writing for children, I naturally wanted in. I've visited her blog, Brooklyn Arden, every so often and have been impressed by her ideas, her verve, and her voice. Plus she works with Arthur A. Levine. Their imprint, besides being recognized as the lucky duck who acquired Harry Potter here in the U.S. for Scholastic, is known for some very cool books. Arthur and Co. just came out with the newest Shaun Tan book, for example, Lost and Found: Three by Shaun Tan. (See post above about Tan's work.)

I will admit that I expected something a little different from Klein's book. I thought I'd see a freshly outlined series of strategies. Instead, as the author warns us up front, she has put together a "Best of" collection of her talks and blog posts on topics relevant to writing children's books. I will also note that the author is, in her words, "a narrative nerd." After listing other nerd types such as music nerds, science nerds, and sports nerds, Klein explains in her introduction:

I am a narrative nerd. I love reading stories, taking them apart and seeing how they work, then putting them back together with each piece polished and gleaming...
This book, Second Sight, is a collection of much of my thinking on these narrative and writing topics between 2003 and 2010, as expressed in talks delivered at writers' conferences and posts on my blog and website. The title refers to the service I try to provide my authors—a second, independent look at their work—and to what I hope this book might teach in turn....

Therefore, as Klein goes on to explain, you will find a certain amount of overlap among some of the material here. When I first realized that, I was a little apprehensive, but my worries vanished as I read the book. It does not feel like one of those old-fashioned records that used to get stuck on one shred of a tune; rather, it feels like a spiraling evolution of thought. In a word (or two), it works.

Here are a few sample topics from the Table of Contents:

And yes, there's a chapter called "A Few Things Writers Can Learn from Harry Potter"!

Now, in some ways I'm the perfect—by which I mean perfectly tough—audience for this book. (Toughest crowd for a workshop, in my experience? Teachers. They instantly assume they could teach whatever-it-is better than the presenter.) The thing is, I've been to a lot of SCBWI conferences in my day, and I feel like I've heard it all. Call me jaded, but in essence, what this means is that it takes quite a bit to get me to perk up and listen.

But that's exactly what this book did. Because one good reason for reading a book is to meet a fine mind and get a look at how it views the world (see Annie Dillard post below). In this case, Cheryl Klein has given an awful lot of thought to what makes children's books tick, and she shares her insights in a way I found intriguing.

And what makes a good character? I'm going to begin with theory here and go on to practice. A character can be defined the same way as a spoon can: by what he is (essence) and by what he does (action). A spoon is, according to Webster's, "an eating or cooking implement consisting of a small shallow bowl with a relatively long handle." But it is just a small, shallow bowl with a handle until it is used. The thing that makes it more than a small shallow bowl with a handle—its very spoonness—consists of its utility in stirring, measuring, and eating.
It's the same way with a character in fiction.

Theory abounds, but as the above excerpt implies, the book includes plenty of practical advice, too. For instance, we are told how to avoid overactive and adverbial dialogue tags and unbelievable first-person voices (in "The Rules of Engagement"). Klein illuminates each of her rules and suggestions with specific examples. The unbelievable first-person voice is a six-year-old boy who describes his grandmother as "wearing a mauve muumuu, neon-pink Jimmy Choo kitten heels, a white cashmere turban fastened with a gigantic marcasite brooch, and delicate frangipani perfume."

Along with counsel such as "a character is a plot," we get tools like the character worksheet. We are also told how to tune up a plot (in "The Art of Detection").

But there's also a dangerous trap you have to watch out for. I think many people seek to get published for recognition and affirmation: Out of all the people or manuscripts in the whole world, someone has chosen ME, my thoughts, my self. And that provides affirmation that I am good, whole, and worthy.

Instead, Klein says, the focus must be on writing "the story you've always wanted to hear, the story you've never read anywhere else, the one that scares you with the pleasure of writing it."

As that quotation demonstrates, Cheryl Klein is a wordsmith herself, which makes this read that much more pleasurable. In "Defining Good Writing," she starts with "Good prose. The sheen of the writing—its quality on a sentence-by-sentence level." The word "sheen" is just perfect.

Then, too, Klein endears herself to me by being in love with a particular series in the same way I am: "I read and reread Hilary McKay's Casson series more because I love the characters so much than because of their plot construction (although they are tremendously well-put-together in retrospect)."

I will point out that Second Sight is not a fluffy book, it's a thoughtful one, best suited for people who are serious about writing for children and teens. So I don't recommend it to the person who meets a children's book writer at a party and says, "Oh, I've always wanted to write a book for kids! I have the cutest idea about a puppy who pouts!" I do recommend it to the children's book writer being addressed (who is backing away slowly, pondering a run to the bathroom or the refreshment table). Or to almost anyone who actually attends SCBWI workshops, belongs to a writing group, and has racked up half a dozen rejection letters.

If you are one of those people, I suggest you get your hands on Second Sight.

Note: I requested a review copy of this book from the author. Here's a link to the purchasing information.
Posted by Kate Coombs at 6:30 AM