A Review of The Midnight Gate by Helen Stringer

Face it, there are a lot of fantasy series out there. So the question becomes, did I like the first book enough to read the second one? In this case, yes, I thought Spellbinder was good enough that I wanted to read Book 2, The Midnight Gate, and continue following the adventures of young Belladonna Johnson. (See my review here.) 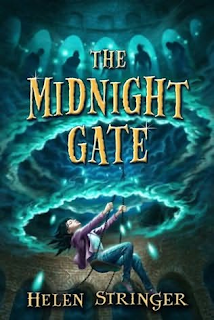 Belladonna is relatively happy even if she is being raised by ghosts. Her departed parents are loving and attentive, though they can't leave the house. Her mom still manages to fix her lunches, and signatures for field trips are provided by Belladonna's grandmother, a psychic who lives just across town.

Then Belladonna runs afoul of the school bully. In her ongoing quest to humiliate others, evil Sophie puts a carefully weakened chair at Belladonna's desk and expects her to sit down, then fall down. Instead, Belladonna's ghost friend Elsie warns her and Belladonna puts the chair at Sophie's desk. When Sophie falls down, she decides to ruin Belladonna's life. All she has to do is rat Belladonna out for living "alone" in her house. Belladonna's grandmother has disappeared, and she quickly finds herself being packed off by a social worker to live with a pleasant older couple, the Proctors.

Except—the Proctors are eeeee-vil! Though it takes Belladonna a while to figure this out, let alone to know what to do about it. (You've just gotta love it when Child Protective Services places a child in a building that doesn't actually exist. Nice touch!)

Belladonna's paladin Steve is being fairly cold to her, to boot. Till finally she gets him hooked into the necessities of her new adventure, in which Belladonna's powers are being used for a very fell purpose indeed.

Eventually Belladonna extricates herself from the Proctors long enough for her and Steve to go after a set of ancient coins that should help them stop what's happening. I like the way Elsie, the British schoolgirl ghost, helps them retrieve eight of the nine coins. But the ninth is hidden in the land of the dead, in the keeping of the Queen of the Abyss. To reach her, Belladonna and Steve must pass the seven guardians of seven gates. All of the guardians are threats, while a few are literally out for blood. Though the guardians are mostly mythological creatures, the author manages to portray them in amusing new ways. Here Steve and Belladonna are talking to the harpy Aello, who feels underappreciated and longs for the good old days when she and her sisters used to terrorize the populace:

The bird-woman looked at her feet sadly and scratched small circles in the sand with a claw.

"Why were they scared of you?" asked Steve.

"Well, I can see that you don't look...that the way you...but that's just a first impression, and—"

"We're harpies," said Aello irritably. "We stole their food, ripped the unsuspecting from their beds, and dragged them here to the Land of the Dead. There were no first impressions, only final ones."

After which Aello points out that she's going to have to eat Belladonna and Steve.

I like the subtle humor, including surprises like a Coupe de Ville ride in the Land of the Dead. I also like how Belladonna doesn't always know what to do next, and Steve has a sometimes surly, sometimes funny personality, which seems exactly right for a boy his age. Ghostly Elsie is a real charmer, so much so that I always want to see more of her.

One of the best things about Stringer's books is the way the main characters respond so naturally to supernatural situations. For instance, it becomes abundantly clear to these kids that as heroes, they're utterly expendable. To backtrack a bit, Belladonna and Steve are also frustrated when, after the first adventure, they're just expected to go back to being ordinary schoolchildren. The only other author I've seen handle this as well as Stringer is Anne Ursu. In contrast, many books just imply that a Chosen One will pass through a great deal of peril, but must be preserved at all costs and so is not-so-secretly untouchable. And Harry Potter is expendable only in the sense that he has been Chosen to die. But Belladonna and Steve figure out that the Powers that Be are quite cavalier about the potential for them to die along the way; if this happens, they'll simply be replaced. It's both funny and chilling, and it feels more realistic than the usual approach, now that I've seen it. (I am also reminded of Anthony Horowitz's young spy, Alex Rider, who is all too aware that he is being used by British Intelligence and that his death might result in a sort of "oh well" shrug from most of the higher-ups.)

At any rate, Belladonna and Steve do manage to survive, and they sort of defeat the bad guys, though not as thoroughly as readers might wish. Still, while there are some creepy situations left hanging at the end of the book, the plot mostly wraps up, with Belladonna getting her home, her parents, and her grandmother back.

If your child is one of those kids who devours fantasy, put Spellbinder and The Midnight Gate on the reading list!

Note: Thanks to the author for providing me with a review copy. Visit her eerie website here.

Brooke from The Bluestocking Guide said...