A Review of Mistress of the Storm by M.L. Welsh

Note to self: If someone knocks on the door and says she's your step-grandmother that you've never heard of before, RUN! At least, that's what Verity Gallant should have done... 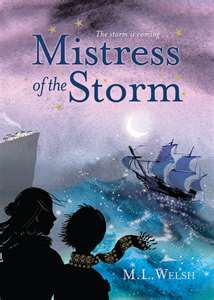 about bullying, smugglers, friendship, really great nautical engineering, and a sort of wind goddess, not necessarily in that order. There are some key arrivals and departures here: an old woman named Alice who is Verity's friend departs, a mysterious ship arrives, Verity's grandfather departs (it's history, but she didn't know about it before), a new girl named Martha arrives, the peace and tranquility in Verity's home departs because her evil grandmother arrives, causing her father's sanity to depart... Oh, and a Preventative Man arrives. He's supposed to be catching smugglers, but he has his own secrets and hopes.

If you are anything like me, you will be incensed by how badly the kids at school treat Verity and even more incensed by how horribly her step-grandmother treats her. (One thing they tease her about is her weight, since she's a little chunky.)

Meanwhile, everyone wonders what that ship is doing in the harbor, and Verity learns a great deal about smugglers—especially her missing grandfather—even as her friendship with Henry and her ability to sail grow stronger.

It becomes clear that Grandmother wants to hurt Verity Gallant and maybe the rest of her family, too. M.L. Welsh is a dab hand at foreshadowing, and the tension in this book builds in a satisfying way.

One interesting aspect of Mistress of the Storm is that Verity gets her hands on a secret book which contains such true stories that they must be retold, or rather reenacted, in real life. Verity appears to be at the center of such a story—or is she? Can the plot be changed?

The author is especially good with names, although the names, along with the smuggling being in the recent past, may cause you to reassess the time frame of this story. It seems contemporary because of the schoolchildren, but later feels more historical. The setting is very British, yet the author almost immediately identifies the land as Albion, a variation sometimes used by writers of alternative history. My favorite character name in the book is Villainous Usage; I also like Jasper Cutgrass, Charlotte Chiverton, Isaac Tempest, and Henry Twogood.

Here is one of Verity's unpleasant moments with Grandmother:

Astonishingly the little ornament suddenly leaped from Grandmother's fingers and dashed itself on the hearth. It smashed noisily on the marble. Verity stared in amazement and horror.

"Really, Verity," scolded Grandmother in a loud, clear voice. "Isn't that one of your mother's particular favourites?"

Mrs. Gallant hurried into the room. "What's all the commotion—? Oh." She knelt down to examine the shattered pieces.

"I did warn Verity to be careful. But of course she rarely listens to her elders and betters," soothed Grandmother.

Verity stared at her in outrage. "That's a complete lie—" she started.

"Verity, really." Mother was holding the broken shards with evident sadness. "How dare you cheek your grandmother. To your room now."

While Mistress of the Storm is a nice read in many ways, the bits and pieces of the book don't always seem to hang together. And I wasn't sure how I felt about Verity's role in the climactic confrontation with her archenemy. However, she is part of a loving and loyal group of friends, something Welsh emphasizes in relation to the book of true stories and the way Verity's adventures wrap up.

It's no surprise to learn from the flap copy that this author "spent her formative years in the sailing town of Cowes, on the Isle of Wight." Next to Verity's friendship with Henry, the sailing scenes and descriptions of the sea are probably the best thing about this book.

If you have the slightest longing to go to sea, or if you have ever been bullied, especially by a truly awful grandmother, give Mistress of the Storm a try!
Posted by KateCoombs at 7:40 AM