A Review of The Cabinet of Earths by Anne Nesbet

This story begins with a prologue, and a Gallic-sounding one at that.

It was his own grandmother who fed Henri-Pierre to the Cabinet of Earths, long ago when he was only four. Don't misunderstand! It happened like this.... 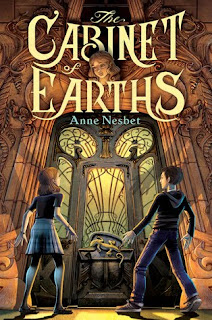 mother asks Henri-Pierre what is kept in the bottles, he laughingly guesses things like lemonade. But she corrects him, whispering in his ear: "
Posted by KateCoombs at 5:09 PM

I can't tell if you liked it. Did you? What's with the bottles that keep time?

I did like it, though it was much more atmospheric and subtle than I expected--more dark and serious, even somber. The bottles are a little difficult to understand, but the time kept is years of life. The Cabinet can be used to keep a person from aging. It seems to invoke the biblical concept that man is made from dust.