A Review of Cold Cereal by Adam Rex

Adam Rex's latest will be in bookstores next week, and like the guy's previous middle grade book, The True Meaning of Smekday, it's more than a little nuts. I will note that Rex and his compatriot, the very funny Mac Barnett, are challenging Jon Scieszka and Lane Smith's reign as children's literature's Madly Humorous Duo. (See Barnett and Rex's YouTube video trailer for the upcoming picture book, Chloe and the Lion. And this outtake.) (Also: If you add in Dan Santat, it's a Madly Humorous Trio.) 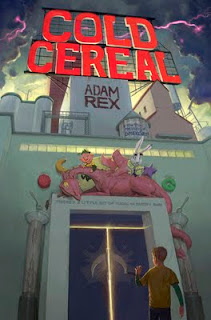 You should also be aware that Rex is an illustrator. And a poet. E.g., in Frankenstein Makes a Sandwich.

So—Cold Cereal. It's a story of leprechauns and invisible rabbit men on the lam, and of kids who can see fairies, also kids who are science experiments and must constantly solve riddles. Scott (full name Scottish Play Doe) is new in town, and he's still seeing weird stuff. Then he meets twins Erno and Emily, who make his life seem downright normal. Both families have connections to Goodco Cereal Company, a place that is obvious eeee-vil in a mad scientist sort of way.

Pretty soon Scott is harboring a runaway leprechaun who says he's actually a clurichaun, and Emily and Erno are trying to avoid the people who apparently made their foster father disappear. Their baby sitter, who just might be Bigfoot, makes a really good ally.

I am currently reading The True Meaning of Smekday, and so far, I like it more than Cold Cereal. Still, Cold Cereal is a nice race around town with a giddy mash-up of mad scientists and legendary creatures to chase and rescue our heroic kid trio, respectively.

As a very big fan of good metaphors, I was especially happy to watch how the author threw these into the cereal bowl. Here are a few samples:

Laughter was batted back and forth like a squeaky balloon [in the classroom]...

...a seat right up front [in the bus], on which sat one very small and delicately pale eggshell of a girl. And exactly no one else.

Erno was a lean and rumpled kid—his clothes, which looked fine on their hangers, always looked on Erno as if he'd found them in the road on the way to school.

Mr. Wilson had the uncomfortable half smile of someone who was being forced to sit quietly while people sang "Happy Birthday" at him.

[About school lunches:] It so happened that they were serving pizza, or more accurately a kind of impersonation of it, as though the whole concept of pizza had been rather poorly explained to the cafeteria workers by people who'd only read about it in books and didn't really like children much.

As you can see, Rex is a dab hand at satire, and you'll find nice little pockets of it at regular intervals, including his terribly funny renderings of cereal commercials, which are illustrated in sequence.

The author lost me a few times in backstory, but really, his book is just a lot of fun—with a sequel or two clearly in the works. Go, Rex! And go, Madly Humorous Duo (or Trio)!

I'd say they've got that title - Scieszka's Trucktown series is still very popular, but his Time Warp Trio is dead and I'm considering weeding it. And I just couldn't drum up interest in Spaceheadz. Lane Smith's last couple picture books have, imo, very little child appeal (I'm still annoyed that I bought Madame President and it Won't. Check. Out)

Okay that DOES sound nuts so of course I'll have to read it.

Cold Cereal is fun, but The True Meaning of Smekday is really outrageously fun!