A Review of The Secret of Zoom by Lynne Jonell

I quite liked the author's previous book, Emmy and the Incredible Shrinking Rat, plus its sequel, Emmy and the Home for Troubled Girls. I'm not as thrilled with her new book, The Secret of Zoom, due out September 1.

The Secret of Zoom is an adventure story with some science that reads more like magic, since it's all based on the properties of an imaginary substance, a sort of mineral deposit called zoom. 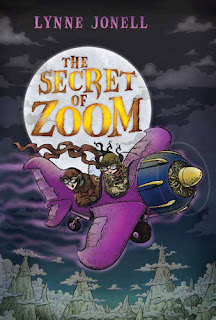 Here we have mistreated orphans, the lonely rich girl in the house on the hill, a missing mother, and a dastardly villain who reminds me of the bad guy in Fortune's Magic Farm by Suzanne Selfors. (We also have an odd little diatribe about how to teach math, though perhaps I only caught that because I'm a teacher.)

Zoom offers us a lot of fun details, like the way orphans are culled for an unpleasant secret mission based on their singing ability, not to mention miniature zoom-powered planes, secret tunnels, and mad scientists.

So yes, The Secret of Zoom is a fairly entertaining read. I just can't help thinking that it could have been a better one. When I read Clover Twig and the Magical Cottage (see review above), I found myself sucked into the story. I'm always reading more than one book, and I'll confess I set Zoom aside repeatedly for other things. Clover Twig brought me back much more easily. And then there's When You Reach Me (see even higher above!), which I devoured in one sitting.

Zoom's plot didn't capture my heart any more than its characters did. I'm on board with all kinds of fantasy, but I'm not sure the zoom premise works as written here. And the missing mother subplot feels a little hokey, although I'll admit that's a hard one to pull off. Then there's the orphan Taft: he makes a nice counterpart to Christina, but I don't feel convinced by their friendship.

While your child might enjoy this story very much, it wouldn't be my first pick in the bookstore.

Note for Worried Parents: In addition to child labor, you'll find one really gruesome detail in The Secret of Zoom about what is done to unsatisfactory orphans. The rest of the story is an adventurous romp, but that bit might give you pause.
Posted by Kate Coombs at 8:57 AM