A Review of Raiders' Ransom by Emily Diamand

Emily Diamand won the first London Times/Chicken House Children's Fiction Competition with this book, beating out more than 2,000 other writers. It's easy to see why. I can't decide which is better, her world building or her characterization.

It kind of surprised me to realize that Raiders' Ransom, the start of a series, is dystopian fiction, set in 2216 after rising sea levels have changed countries like England forever. I'm used to seeing that subgenre of science fiction and fantasy dominated by Young Adult writers, perhaps because it tends to be Dark Stuff Indeed.

Which is not to say that Diamand's vision of the future isn't bleak. But it is also swashbuckling, and this book is middle grade fiction, not YA (though perhaps for the older end of the spectrum, say fourth through seventh grades).

In Diamand's future, the British Isles are made up of the Last Ten Counties, a region of southwest England ruled by an oppressive Prime Minister; Greater Scotland to the north; and the warrior tribes (Raiders) who inhabit the marshes along the now-abbreviated southeast coast. In a luddite backlash, technology has been destroyed by the fearful denizens of the southern regions, though Scotland has retained some and is trying to get their hands on more. 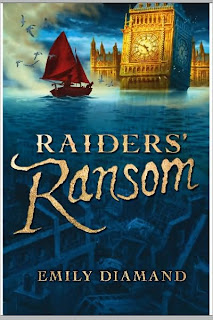 Our story has two narrative voices—fishing girl Lilly, accompanied by the psychic seacat she simply calls Cat, and a raider boy known as Zeph, the son of a ruthless tribal leader. Zeph's father leads his men to Lilly's fishing village to find a lost tech treasure for the secretive Scottish Ambassador and instead kidnaps Prime Minister Randall's seven-year-old daughter, Lexy. Lilly's beloved grandmother is killed in the raid, and when the Prime Minister takes out his wrath on her village, Lilly sets off on a fairly hopeless quest. Disguising herself as a boy (natch), she steals the tech jewel from Lexy's aunt with the goal of ransoming the missing child and saving her friends.

Nothing goes as planned, of course. Zeph and Lilly's paths cross in a dangerous half-drowned London, where trust is offered and then betrayed as the two try to achieve their disparate heart's desires. Both have troubles that can't easily be wrapped up in the course of a single book, but the plot comes to a satisfying stopping point, which pleased me—series or no series, a book's plot should be as round and whole as an orange instead of trailing off like an unfinished sentence.

Diamand's characterization is a real strength in Raiders' Ransom. Lilly and Zeph are imperfect, yet likable. Lilly is initially more empathetic than Zeph, who is being taught by his father to be brutal. But Zeph ultimately makes his own decisions, as does Lilly, both of them not so much rebelling against the adults around them as finding their own ways to be. I was happy to find that many of the author's secondary characters are rounded, as well, some surprisingly so (e.g., Lexy's aunt and Zeph's "stepmother").

One of the oddest characters in the book is the handheld computer or jewel, which seems like a ghost to superstitious southerners, including Lilly. Diamand has fun with the AI by making him prissy and self-serving, which means that his reactions make even less sense to Lilly, who is busy fighting for her life, than they would if she had any idea what computers were all about.

Diamand gives her characters' voices a nice little futuristic twang without going overboard. I'm not always fond of books written in present tense, but after the first few pages I got into the swing of things, deciding that the sense of immediacy suited the storytelling. (It's a trend that may grow, perhaps in reflection of film and other "present tense" media, even texting.)

Maybe Cat can smell fish? Fish guts curling off the harborside into the water; fish scales decorating the stones like pearls. Scrape, slice, pack: the daily chore of fisherfolk. And Cat's a favorite, with his pretty gray markings and his seaweed eyes. Any one of 'em, man or woman, would give him a tidbit, hoping to steal him away. He makes the most of it, gets a bellyful whenever he can, but it doesn't matter what they do, how much fish they give him; he'll thank 'em, eat it neatly, then come straight back to me.

This series start promises real adventure in a newly envisioned future, one where young heroes must navigate the treacherously high seas surrounding the British Isles as well as the untrustworthy shoals of politically motivated adult behavior. As for a possible environmental message, Diamand launches her plot off a current question about the ocean rising to cover up the world's key port cities. From there, her imagination takes her to a new place: I recommend you visit it in Raiders' Ransom and the books to follow.

Note for Worried Parents: There are a few off-color references and a raider has a concubine, plus the Viking-like raiders are pretty scary, especially when they start throwing knives.