A Review of Syren, Septimus Heap Book 5, by Angie Sage 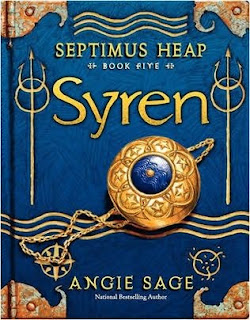 When the publisher offered me an ARC of this book, I decided it would be interesting to try jumping into an established series in the middle to see how the book would read. The obvious question in my mind was, Why is this series popular? Fantasy fan that I am, I'll admit that I've given some of the current fantasy series a miss, including this one—until now.

Of course, the drawback to starting in the middle is that it took me a while to figure out who all of the characters were and what their relationships were to each other. Still don't know the backstory on everyone, though Septimus is the main character and Simon is obviously a somewhat reformed bad guy.

I'll address my pet peeve first and get it out of the way before focusing on the story. That is, the author (or her publisher) sets all of the magical terms specific to Sage's world building in boldface with initial caps. The impression this gives is that there's a video game involved, or that this is some kind of product placement. Or perhaps it's more like seeing the glossary terms in a middle school social studies textbook. At best, it's as if the author were saying, "Look! I'm inventing/claiming these words to describe the magic in my fantasy!" Yet most fantasy writers borrow/invent/re-spell magical terminology, and there's no need to fuss about it. From a reading standpoint, the boldface terms (Magykal, Sight, Seeing, Task, etc.) are distracting.

However, the story is far more important, so let's lay the funky boldface issue aside and take a look. Syren begins with a group of characters gathering in a portside town: Septimus, Jenna, Nicko, Snorri, Ullr (Snorri's panther companion), and Beetle, who have traveled here on a dragon named Spit Fyre. Septimus's companions are headed for a net loft, but he takes off on Spit Fyre again to check in at his wizard school.

Once Septimus leaves, the rest of the group meets up with a raffish sea captain named Milo Banda, who turns out to be Jenna's father. He invites them to his ship and they join him. Milo also takes delivery of a mysterious cargo. Thus ends the prologue.

Chapter One begins with Septimus "back in his bedroom at the top of Wizard Tower, Queste completed." (We find out that hardly anyone ever completes their Queste, which makes Septimus pretty unusual.) The ExtraOrdinary Apprentice checks in with his supervisor, ExtraOrdinary Wizard Marcia Overstrand. She promotes him to Senior Apprentice, and he promptly sets out on Spit Fyre again to fetch his friends.

Meanwhile, Septimus's Aunt Zelda sends a kid named Wolf Boy on two errands—the first to deliver a rather delicate protection spell called a SafeCharm to Septimus and the other to visit a dangerous house in the port city and fulfill a witchy quest. But the spell ends up in the wrong hands, and the witches are much worse than Wolf Boy had anticipated.

These three strands—Septimus on Spit Fyre, Wolf Boy at the witches' headquarters, and the remaining friends on Milo Banda's ship—eventually converge on a strange island off the coast, where our heroes must resist the call of a Syren and stop a magical invasion.

There's a little J.K. Rowling in the tone of this book as it follows a group of friends on their adventures. Sage can be funny, too, as when the sly scribe who has stolen the protection spell opens it, not realizing it contains a genie:

Merrin raised the gold bottle to his nose and sniffed. It didn't smell very nice. In fact, it smelled distinctly unnice. However, he was not to know that jinn are not known for smelling sweet—and many of them make a point of smelling fairly disgusting. In fact, the jinnee that dwelled in the gold bottle clutched in Merrin's sticky hand did not smell too bad, as jinn go—a subtle mixture of burned pumpkin mixed with a touch of cow dung. But Merrin felt disappointed in his scent bottle. Just to make sure it really did smell so bad, he put the bottle right up to his left nostril and sniffed hard—and the jinnee was sucked up his nose. It was not a good moment for either of them.

Once the book gets off the ground, the three subplots are pretty compelling. I particularly liked Wolf Boy's hair-raising adventure at the witches' headquarters.
Sage also invents some colorful characters, such as the catlike man who guards the lighthouse and the thuggish Thin Crowe and Fat Crowe, not to mention Syrah, a girl who is a prisoner of the eerie Syren.
Septimus himself reminds me a bit of Harry Potter. He is loyal and determined, and he thinks fast in a pinch. Yet he is pleasantly fallible.
Aside from my quibble about boldface terms, the only issue that caught my eye was that Sage sometimes uses magic a bit too freely to solve problems. Need to cross an ocean? Here's a magic submarine. Need to camp on a desert island? Here's an enchanted survival kit, complete with water. Need to heal a dragon? Here's a spell-type cure. This approach doesn't always draw attention to itself, but I did notice it here and there.
All in all, Syren is a fun and fast-paced read, with an appealing cast of characters whose adventures are a good pick for kids who have finished The Spiderwick Chronicles, if not Harry Potter. I haven't decided whether I'm going to take the time to read the first four books, but I can certainly see why Septimus Heap has won so many fans.
Posted by Kate Coombs at 2:12 PM