A Review of Everything I Need to Know I Learned from a Children's Book, edited by Anita Silvey 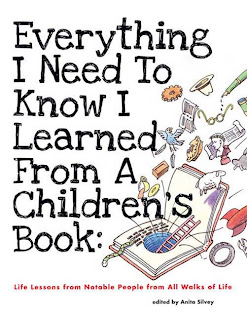 As mentioned in an earlier post, a friend tore out an ad in the New Yorker for this book and gave it to me, whereupon I rushed off to get a copy. And now this review is me "tearing out an ad" for you!

Anita Silvey is known for her books about children's literature, with titles like 100 Best Books for Children, The Essential Guide to Children's Books and Their Creators, and 500 Great Books for Teens. These books are useful for parents and librarians alike, not to mention teachers.

In this new work, Silvey compiles commentary from 110 "society leaders" about the children's book that has most influenced their lives—a marvelous premise.

For example, oceanographer Robert Ballard, the man who located the wreck of the Titanic, tells us about his favorite book at age ten, Jules Verne's Twenty Thousand Leagues Under the Sea:

My hero was Captain Nemo. I wanted to be inside his ship, the Nautilus. He built his own submarine, using advanced technology. He was a technologist, but also an adventurer. Through a giant window, he examined the sea.
I wanted to be an undersea explorer.

Another intriguing entry comes from Dr. William C. DeVries, who was the first cardiothoracic surgeon to perform successful implantation of an artificial heart. He speaks of his childhood love of The Wizard of Oz:

In the book, the Wizard of Oz talks to the Tin Woodman about whether or not he really wants a heart. The Wizard believes that having a heart is not such a good thing: "It makes most people unhappy." But the Tin Woodman says, "For my part, I will bear all the unhappiness without a murmur, if you will give me a heart." In my work, I have thought about those lines many, many times.

Many of the contributors are writers, although Silvey does give us politicians, scientists, businessmen, artists, and news broadcasters, also a few actors and an athlete. One factor I noticed is the way that book choices tend to correlate to age; for example, picks like Jack Schaefer's Shane (country songwriter Billy Edd Wheeler) and The Bobbsey Twins series (Kirk Douglas) are from an earlier era than young actor Tyler Hilton's selection, Maniac Magee.

Jay Leno's pick? Mike Mulligan and His Steam Shovel. Jon Scieszka chooses another favorite of mine, Go, Dog. Go! I also like Steve Wozniak's pick, the Tom Swift series. As a boy, the future maker of the Apple computer was drawn by the character's inventions: "To me Tom Swift represented the epitome of creative freedom, scientific knowledge, and the ability to find solutions to problems."

When more than one person chooses the same book, readers get the delightful benefit of different perspectives. For example, author Linda Sue Park and movie reviewer Roger Ebert both select Elizabeth Enright's The Saturdays. Park comments on the author's strong, detailed portrayal of the city, while Ebert explains that these books showed him that stories could be wonderful—he was led to them by the librarian, whom he names, who led a book club when he was a boy. Her love of reading was contagious.

Children's book author-illustrators Maurice Sendak and Chris Van Allsburg both speak of being inspired by Crockett Johnson's Harold and the Purple Crayon. The book fostered a unique, "do your own thing" artistic spirit in these creative people. As Van Allsburg puts it, "I believe that the empowerment of Harold appealed to me as a reader—I loved the idea that I could be in control and create my own world."

Some contributors fell in love with certain books as adults, whether as creative people, parents, or literacy advocates. A few have even made careers out of the books. For example, scholar Michael Patrick Hearn has spent his life studying The Wizard of Oz and has created a definitive annotated edition.

I especially appreciate Wicked author Gregory Maguire's pick, Jane Langton's The Diamond in the Window. Langton's subtle fantasy series, with its focus on the Transcendentalist movement (think Ralph Waldo Emerson and Henry Thoroeau), is one of those terrific but less well-known reads for thoughtful children.

If you are in love with children's literature, you will probably enjoy this book as much as I did. It's also interesting just to see what people pick. My one quibble about the book is that it's hard to figure out who the contributors are if you don't recognize their names—the information is buried near the bottom of sidebar commentary. One might argue that the book picks are more important than the contributors, but it would have been fairly simple to give a brief bio in a separate little item for each entry. Instead, you must hunt through the sidebars or flip back and forth between the entries and a list of bios in the book's back matter.

I would also point out that this is not a book for children, although it might be a rich experience to share parts of it with children and ask them about their own favorite books. Everything I Need to Know I Learned from a Children's Book is a fairly serious and grown-up work. It is also a lovely walk down the lanes and side paths of children's literature. What's more, it reminds us of the great power of books to shape lives.
Posted by Kate Coombs at 7:57 AM

Labels: Anita Silvey, Everything I Need to Know I Learned from a Children's Book, literacy

This does sound wonderful, Kate. You especially had me at the Diamond in the Window reference - I adored that book (I grew up right near to Concord, too).

Wow...I am going to order this one tonight! Thanks so much for bringing it to my attention!

Great mix of people and should help parents find good books. Thanks for this!