A Review of The Sixty-Eight Rooms by Marianne Malone

It's hard not to read this book without thinking back to another book about children sneaking around in a museum, E.L. Konigsburg's The Mixed-Up Files of Mrs. Basil E. Frankweiler. Only this time we're in the Art Institute of Chicago, zeroing in on the titular sixty-eight rooms in the Thorne miniatures collection. (And yes, I've been there, although I was more interested in the Chagall window, not to mention the satisfying discovery that a board game my family had when I was a child, Masterpiece, was obviously based on paintings from the Art Institute.) 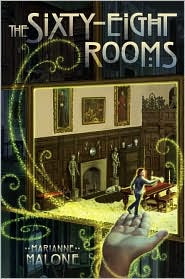 As our story begins, Ruthie goes to the museum on a field trip and is entranced by the Thorne Rooms, encapsulations of different countries and eras in history. Ruthie, who shares a cramped room with her older sister, wishes she could have one of the beautiful rooms all to herself and sleep in an exquisite canopy bed. Meanwhile, her bold friend Jack asks a staff member, Mr. Bell, about the mechanics of the exhibit, and Mr. Bell lets Jack take a peek into the back hallway behind the miniatures. Jack pulls Ruthie over to take a look, too, and sneaks inside—where he sees something on the floor and tucks it in his pocket.

Jack's find turns out to be a beautiful little key. When Ruthie tells him he should put it back, he convinces her to return to the museum with him the next day and look for the lock the key fits. Only once they sneak back into the corridor behind the Thorne exhibit and Jack lets Ruthie hold the key, Ruthie shrinks down until she herself is a miniature girl. Briefly shocked and then thrilled by their discovery, Ruthie and Jack experiment with the key. Later, having properly tricked their families, they hide in the museum by night and explore the rooms in the exhibit at their leisure, even learning that they can walk through the outside doors of the rooms into the past and talk to people, i.e., in France a few years before the Revolution and in a Massachusetts village during the Salem Witch Trials.

One of the best things about this book are the strategies Ruthie and Jack come up with for getting around the exhibits while they're small, such as unshrinking when needed, using duct tape ingeniously, and dealing with a giant cockroach. Their adventures in the past are brief, but intriguing. They must also solve the mystery of who used the key before them, leaving items like an ordinary pencil and a barrette in surprising spots.

The Sixty-Eight Rooms is a pleasant book, though perhaps not a compelling one. Of course, the author's passion for the Thorne Rooms will be more appealing to some young readers than others. I did notice that exposition, a sort of adult voice which sounded a lot like my high school history teacher, crept in and out of the book, at times overanalyzing the rules of the magic and interfering with the storytelling. I also found myself wishing that Ruthie weren't so unwilling to take risks in contrast to Jack's brashness, a combination which felt a bit stereotypical. (Even their names reflect this—Ruthie is a sweet, old-fashioned name, while Jack sounds like the daring boy in "Jack and the Beanstalk" or even Captain Jack Sparrow.)

However, there are some nice adventurous moments in The Sixty-Eight Rooms. I was especially pleased when the kids were able to walk out of the rooms into the past, though a few more such occurrences would have really enriched the book. Fans of historical fiction, time travel, and intellectual puzzles are likely to wish they were Jack and Ruthie, shrinking down to explore a miniature world of mysterious rooms.

Note: This book is due out on February 23. I requested a review copy from the Amazon Vine program.
Posted by Kate Coombs at 9:56 PM

I just added this one to my list, in as much as I meet all three of your fan criterea!

Charlotte--Oh, good! I'm curious to see what you think.

Does this book have any negative ideas such as swearing or cursing?

Carey--This is middle grade fiction and is quite wholesome. (I usually only add a Note for Worried Parents if a book contains anything that might be worrisome.) So I think you're fine!