A Review of Steel Trapp: The Academy by Ridley Pearson

Steel Trapp: The Academy is Book Two in a series I think of as one of the Alex Rider imitators, and I mean that in a good way. Few children's and YA books tend to be written for and about boys, so I deeply appreciate Anthony Horowitz's series about a reluctant teen spy. When I asked one of my new tenth grade students recently what he'd been reading, he told me how much he loves the Alex Rider books. A few days later, I gave the first book in the series to another student to read. 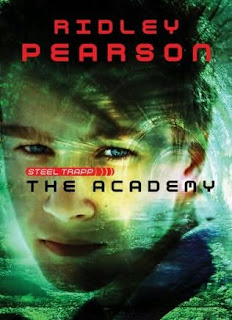 Of course, within the Alex Rider school of writing (James Bond or The Bourne Identity for kids), some titles are better than others. I thought the first book in Ridley Pearson's new series, Steel Trapp: The Challenge, was one of the better entries in the espionage/thriller genre for kids. I was particularly pleased that the whole story was set around a national science fair, and that Steven "Steel" Trapp was nicknamed for his mind. His compatriot, Kaileigh, was also presented as a science fair competitor. The only reservation I had about the book was that I felt that the adult characters (e.g., federal agents) got too much page time and had too much power over the plot. This is, of course, where teen spy books get tricky—they are essentially a thinly disguised form of fantasy. In real life, how much access could a couple of teens possibly have to things like weapons and national secrets?

In Steel Trapp #2, The Academy, Steel goes to spy school, although the school won't admit what it is up front. Steel, who discovered in Book One that his own father was a spy, gets suspicious when Kaileigh shows up at the same East Coast boarding school on scholarship. He and his friend begin investigating a secret society on campus.

Eventually Steel confirms his growing suspicion that Wynncliff Academy is a recruiting ground for future spies. He and Kaileigh are invited to join a junior espionage team whose mission is to track down a group of sophisticated young pickpockets stealing diplomatic secrets from guests at elegant Boston hotels. Of course, Steel and Kaileigh spend much of the book wondering who to trust.

The author intertwines Steel's story with the experiences of the pickpockets, essentially a group of bright street kids recruited by a mysterious woman, a chilly faux mother figure. The pickpockets are presented as an intriguing opposite number to Steel's group of privileged young academy spies. This gives us a feeling of having the best of both worlds, say, from Horowitz's Alex Rider series and Robert Muchamore's grittier Cherub series.

Pearson has a good time with Steel's difficulty in reading Kaileigh's signals when she subtly expresses her attraction to him. There's no sex here, just some social interplay that adds liveliness to the plot. Steel is also attracted to an older girl who has her own reasons for keeping an eye on him. (Note to the author: "handsome girl" is not a term used by today's teens! At least it's not in the dialogue...)

I'll just point out that Pearson's wording is occasionally clunky, but generally serviceable.

I was happy to come across a sports subplot in The Academy. Steel not only has some very physical adventures while playing spy games—most notably one involving hiding between the valve arms of a giant pipe organ to avoid being caught—but he learns to play a variation of dodgeball called ga-ga. According to Wikipedia, the game is Israeli in origin. Steel's sports practices and games add further appeal for boy readers. I have to admit, I found myself thinking about quidditch, despite the lack of flying brooms.

While Steel is athletic, his greatest ability is a photographic memory, which proves useful whether he's playing ga-ga or spy games. Pearson shows that Steel's abilities can't always save him from disaster, however, which makes the boy more likable. In fact, Steel is a little embarrassed about his gift because people have fussed about it so much over the years.

Less finely drawn as a character because the books are really about Steel, Kaileigh Augustine does make a good hook for bringing girl readers to the series. She is bright and talented in her own right, although she is set up to be a more cautious counterpoint to Steel, which struck me as a bit stereotypical.

As a relative newcomer to the teen spy genre, Steel Trapp seems more than capable of holding his own. I was pleased to find that Book Two kept its focus squarely on the kids. Let's hope the series just keeps getting better!

Note for Worried Parents: This book is listed for ages 9-12, but it feels like a wholesome YA to me. That simply gives it a nice broad range! There's a little flirting and boy-girl stuff here, nothing major. For example, Kaileigh suggests that in a pinch, she and Steel can pretend to kiss (yes, that old chestnut). Much blushing ensues on Steel's part, although at one point he really does kiss the girl.
Posted by Kate Coombs at 6:37 PM

Enticing comparison - Bourne Identity or James Bond for kids. I like the sound of this series. Enjoyed your review - happy to find your blog through Kidlitosphere.

Thanks, Megan! The funny thing is, there really is a Young James Bond series. It's written by Charlie Higson and is pretty good, though I still like the Alex Rider books best. (I suspect the James Bond people started asking themselves why Anthony Horowitz should make so much money from books about a young spy when they could be doing the same thing with JB's youth!)