A Review of Twilight: The Graphic Novel, vol. 1 by Stephenie Meyer and Young Kim

On a darker note, I picked up the first Twilight graphic novel this week. A few statistics: The book has been out four days and is #24 in Amazon.com's sales ranking. Forty-one customer reviews have already been posted, with an average rating of 4-1/2 stars.

As for me, I found myself looking to see how Kim's artwork compared to the movie cast, because hey, isn't that the first thing you would do? For the record, this Bella is much sweeter looking than Kirsten Stewart, who has a kind of world-weary edge to her. Edward looks a little younger and sweeter, too, for that matter. And so does Bella's dad, who is blond here. And Jacob. Everybody is just less square-jawed... Do I sense a trend? Well, Alice looks exactly like movie Alice, and so do Mike and Jessica, Bella's new friends at school. But that's about it. 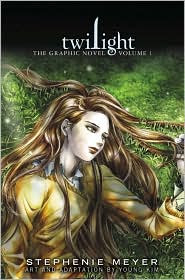 Of course, we should address more important matters. I think you'll find, as I did, that the graphic novel is a terrific format for this kind of storytelling. After all, Twilight is essentially dot-to-dot angst, and a graphic novel provides a snapshot of each of those dots. If anything, this format allows for heightened drama.

Purists (AKA worshippers) will be bugged by minor differences, but those of you who appreciate Twilight in a less-avid way and who are fans of graphic novels will probably be happy with Young Kim's rendition of the bestselling book in the universe. Considering how much talking goes on, Kim manages to make the story feel relatively fast-paced. Watch also for the occasional mixed media touch, such as a photo of a car in the background instead of a drawing.

While most of the book is in black and white, color is added in a few key spots, most notably in the meadow scene, where the richness of the color highlights the way this couple's cosmically destined love takes them out of ordinary reality. Of course, the artist can't resist using red in a couple of places, too, e.g., for Bella's blood. Kim refrains from putting it on the book jacket, however, creating a new, softer look.

I suppose the black and white used for the majority of the pages suits the mood of Twilight, but I do find myself wondering what the book would have looked like with color throughout. And I have a weird quibble: Kim often uses a heavy black line for the "tail" portion of the voice bubbles, which I felt was distracting. (If any of you know what that part of a voice bubble is actually called, let us know! If there isn't a name, we should make one up...)

My shortest review ever, and why? Because I think the word "spoilers" is passé at this point, as is any kind of plot summary for such a well-known story. Suffice it to say that if you're a serious Twilight fan, you should run out and buy the graphic novel right this minute.

Note: This is not the entire first book in Stephenie Meyer's series. It takes us up through the forest scene and stops, To Be Continued in Volume Two. And by the way, the eminently mockable glitter chest works better here than in the movie.
Posted by Kate Coombs at 10:26 AM

Somebody told me this is part of a comic genre - Korean romantic or something like that? I dunno much about the intricacies of various manga and comic art - I just saw "Twilight graphic novel" and said "drat, I gotta rearrange my order lists and buy two copies".

Spoken like a true librarian! Yes, Young Kim is Korean and the book does have a manga-ish feel. Romanticized, definitely. (Hence all the pretty-pretty characters, even the boys!)

I got the graphic novel just yesterday and fell completely in love with Young Kim's amazing drawings. Does anybody know when the second volume's coming out??

Amorailuv--I know, the art is excellent! Anyway, I just checked, and the release date for vol. 2 has not been announced yet. When it is, I'm sure it will show up on Stephenie Meyer's website first. Here's the address, just in case you don't already have it: http://www.stepheniemeyer.com/