It's spring, and I'm in the mood for picture books. Fortunately, HarperCollins just sent me a batch of them, so I'll share a few of my favorites with you. Thanks, HC! I will point out, though, that none of the Easter-themed books made the cut. (In my experience, holiday-themed books tend to be cutesy or bland.) Here, then, are books about spring chicks, a cat with a spring in his steps, and a springy-dingy case of the sillies. 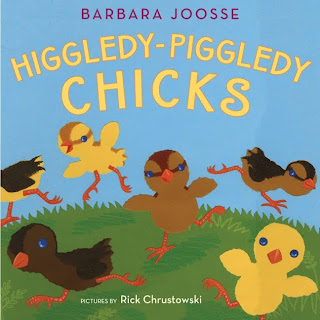 I tend to like and write picture books for the 5-7 end of that 3- to 7-year-old range, so I have to take my mind to a slightly different place to read books intended for the Pre-K set. Remember, the dinky crowd appreciates stories about other little creatures who venture away from mommy briefly and come back safely. They also like stories with refrains or what we could call "I know that!" elements, words and phrases they can call out as the book progresses. And the next time, and the next time... From there they move on to play-reading from memory, a good step toward real reading.

Author Joosse gets the story off to a sleepy yet suspenseful start with these lines:

Hush.
Here's the barnyard
in the deep, dark night—
everything in its place, waiting.
Hussshhhhhh.

On the next page, it's morning, and Banty Hen and the Aunties are scratching in the dirt. But Banty gets a "broody" feeling, and she lays seven eggs. I like the author's sound words here and in other spots in the book, e.g., "Bucka-buk! Bucka-buk!" for the mother hen's voice.

Mama clucks.
Kuk! Come when I call.
Kaak! Watch out for danger.

Over and over, Banty Hen calls to her seven chicks, and they come running. Here the younger reader can help count the chicks to make sure they're all safe, just like the mother hen does. Finally it is night, time for bed.

In a book which ends with the word "safe" too, well, safe? Nope. Not for three- and four-year-olds. This book has plenty of chick action in the middle, supported by onomatopoeia, even as it begins with cozy night and ends with cozy feathers.

Higgledy-Piggledy Chicks wouldn't be nearly as effective without Rick Chrustowski's artwork. Did you know that Robert McCloskey kept baby ducks in his bathtub when he was doing the artwork for Make Way for Ducklings? There are two nice notes in the back of this book—one from the author telling us how chicks grow, the other from the illustrator, with photos of real chicks on top of his artist's desk. The illustrator explains how he made the art and describes his "hundred-year-old hobby farm...the backdrop for our story." Very cool.

Chrustowski uses collage, and the result is lively as well as reader-friendly. The chicks aren't all a matchy-matchy gold, either: some are brown, some have brown backs and light bellies, and one is black. This gives the chicks, and the book, more personality. You may not be able to tell from the cover art shown here, but the artist has used colored pencils to add texture to his collages, making the illustrations that much richer.

Higgledy-Piggledy Chicks is unlikely to hit the top of the charts because it isn't the flashiest story in the world, narratively speaking. But it's the kind of book you might find yourself reading over and over at bedtime, listening to your child count chicks and point out dangers, then smiling to discover all seven chicks present and accounted for on the very last page. Just like your own little chick.

Bonus: Have fun teaching your kid to say "higgledy-piggledy"! 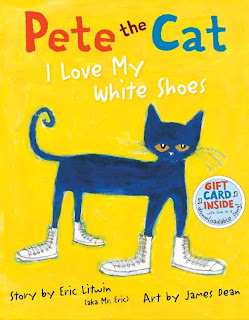 Pete the Cat: I Love My White Shoes by Eric Litwin, illustrations by James Dean

"Mr. Eric" Litwin is first and foremost a performer—his CD's of songs for children have won Parents Choice and other awards. He has performed at numerous schools and libraries, and even the Lincoln Center. Then this particular song earned itself a book deal, no doubt with a little help from the Internet.

But then Pete steps in a large pile of strawberries. "Oh no!...What color did it turn his shoes?" And the little reader will call out enthusiastically, "Red!" as you flip to the next page. The book continues with the same pattern, giving us a bit of a twist at the end, as well as a cheery moral: "...because it's all good."

Illustrator James Dean is apparently famous for his cat pictures. Pete is not a cute little fuzzy kitten; he's sly, he's cool, and he plays the electric guitar. Pete is also an intriguing shade of blue, while his shoes are hightops. Considering what a simple narrative this is, it's surprisingly funky. I liked small details such as the hand-drawn font changing color with the story's color changes. And check out the endpapers!

Again, Pete the Cat is a book with a refrain, just right for young readers who like knowing the "answers." To get an idea what I mean, watch this darling video of a child who looks like she's about five reading/singing the book to her younger sister, who naturally guesses the colors and chimes in on the refrain.

I looked up the song on the author's CD, The Big Silly with Mr. Eric (2006), and discovered that most of the story is chanted, with only the refrain being sung. Said refrain is nothing extraordinary (reminding me, oddly, of a fragment of an old pop song, "I know what boys like..."). But somehow, the combination of a cumulative story, a singable refrain, and Dean's hip, even hippy artwork make for a book your child just might like very much. For one thing, I'm sure young readers will be able to come up with other things the cat could step in, and corresponding colors for his shoes. (No, not that! Be nice!) 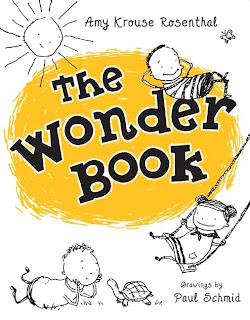 This isn't a picture book, but it is for younger readers. While I cheated and read The Wonder Book in one sitting, it's really meant for here-and-there dipping. You know, your kid is antsy and you say, "Let's find something fun in The Wonder Book!" Which is supposed to calm them, much like music allegedly calms the savage beast.

I'll just give you the first few items as a sampler. We start with a poem called "Pancake College," in which a kid explains how her dad gets up on Saturday mornings and makes creative pancakes. One stanza reads:

Next up are four humorous retellings of nursery rhymes, e.g., "Mary had a little lamp." This one speaks for itself:

Tinkle
Tinkle
In the sea
Don't look under
While I pee...

A poem called "Typical Day" nicely spotlights the way parents crank out those yeses and no's. We then get a page full of "I wonder" statements. My favorite is "I wonder who left something under the tooth fairy's pillow when she was little." And so on, for a collection of rhymes and puns and palindromes and miscellany, all very upbeat and sometimes off-the-wall (a page of wordplay just for "rust"?)

Paul Schmid's black-and-white drawings are friendly and clever, successfully rounding out what the author is trying to accomplish with this book. Schmid's loosely inked child characters play throughout the pages of the book, their faces capturing the myriad emotions required by the text.

Certain poems in the collection work better than others, as poetry goes, but the overall concept and mood of The Wonder Book will make it a happy contribution to your family's "To Read" list. There's a kind of sweetness to the fun. And in case you haven't noticed, silly is good!

(See also a review of The Wonder Book at Charlotte's Library.)
Posted by Kate Coombs at 10:42 AM

I haven't seen the first two (though I'd love to at some point) but The Wonder Book is good fun! And I agree completely, it's hard to find a solidly good "Easter" book!

Becky--I find myself going clear back to that classic, The Country Bunny and the Little Gold Shoes, by Dubose Heyward and Marjorie Flack. That's about it!

Hi Kate, great blog and great entry! I am the daughter of Barbara Joosse (author of Higgledy Piggledy Chicks and lots of other great stories) and I wanted to note that HPC is a wonderful book for younger infants too. My daughter Lucia is 10 months old, and this book has been in her three favorites (along with Wild Things and The Day the Babies Crawled Away) for several months now. I promise this is an unbiased report -- I couldn't dictate her favorites if I tried. She loves the sounds and the drama, she rubs the illustrations of the eggs waiting for them to hatch, she turns her face away from the pages at the peak danger moments and turns back when it's safe. From her extensive library she chooses Higgledy Piggledy Chicks again and again, and she's not even old enough to know that her grandma wrote it!

Maaikeh--Thanks for stopping by! I mentioned 3 and 4 as an ideal age, but you could certainly go older or younger, as your experience shows. I hope tons of parents are out there reading picture books to their babies. And how nice for Lucia that her grandma has written such a beautiful book!