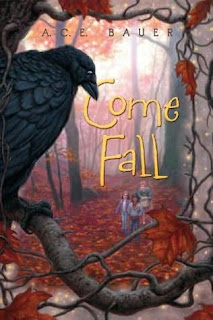 Come Fall by A.C.E. Bauer—This slim book has a great premise, answering the question, "What happened to the little Indian page from A Midsummer Night's Dream?" Actually, Bauer posits a different scenario for Oberon and Titania's disagreement; here the boy, Salman Page, is a foster child in a contemporary setting, where he has been hidden from Oberon. Salman's foster father dislikes him, and his foster mother, while tough, puts him to work in her vegetable garden, a task that ends up being satisfying for the lonely boy. Seventh grader Salman makes two friends at school, a girl named Lu who is assigned to show him around and a boy named Blos Pease who apparently has Asberger's. Salman is friends with a crow, as well, which results in some teasing from the "mean kids" crowd. As the story goes on, we get to see the war between the fairy king and queen through Puck's eyes, and we worry about how that war will affect Salman. This sweet, slow-paced book is really about kids and their struggles and friendships, but the unusual fantasy elements make it into something more. 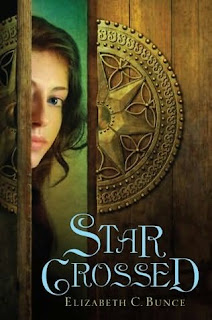 Starcrossed by Elizabeth Bunce—Celyn "Digger" Contrare is a young thief, mostly of political documents and thus secrets. As she runs through the city trying to escape from the Greenmen, or political-religious police, she winds up in a boat with four aristocratic teens and becomes a lady-in-waiting to Merista. Then, in a distant, snowy fortress where an avalanche blocks any possibility of escape, Celyn is forced to spy on the household by a blackmailing lord. Little by little, Celyn's self-serving, survivalist approach to life is overturned by new loyalties and larger concerns. And of course, the girl has secrets of her own... Starcrossed is an intelligent, satisfying fantasy with a large dollop of political intrigue and a lot of plain old sneaking around, as in one memorable scene in which Digger climbs up the outside of the wintry castle trying to steal back her life. 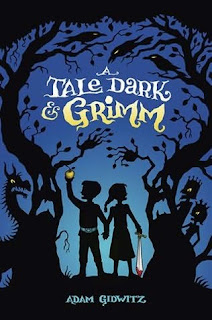 A Tale Dark and Grimm by Adam Gidwitz—This title has been reviewed quite a bit elsewhere, so I'll just say that it is wonderfully well made, though self-conscious in a very post-modern way, as Marjorie Ingall points out in her glowing New York Times book review. For example, the narrator is so present that he becomes a kind of character in the book. Gidwitz sends Hansel and Gretel on a Joseph Campbell-esque journey through a series of the Grimms' grimmest tales, where they experience having their heads chopped off, being threatened by a cannibal witch, and (in Hans's case), being turned into a magic wolf-bear beast and skinned alive—among other things. The author takes the symbolism and messages of these tales and heightens them in such a stylized, overt way that it reminds me a little of Kabuki theater. His genius is that he makes this work.
Posted by Kate Coombs at 7:08 PM

Coincidentally, I read both Starcrossed and Tale Dark and Grimm in the past week (or two-- anyway, since I last took books out of the library). I also LOVED them both. There's me seconding the recs.

I want to read all three of these and haven't gotten to them yet. A Tale Dark and Grimm is the one I'm looking forward to the most.