A Review of Saraswati's Way by Monika Schröder

If you liked the film Slumdog Millionaire, take a look at Saraswati's Way, a YA novel about a young math whiz living in a small village in the Indian countryside. 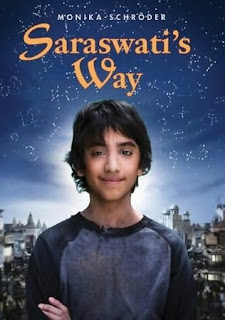 Akash's life is not good, and it's about to get worse. His teacher has been kind enough to tutor him on the side, but has already taught Akash everything he knows. Akash won't be able to get more schooling without a scholarship because his family has no money. His mother is dead, and his father works very hard to support the entire household, including Akash's ruthless grandmother, who will hear no wrong spoken of her eldest son, Akash's uncle, even as he drains the family's limited financial resources with his opium addiction and gambling.

The loan shark who owns their farm insists on being paid the back rent he's owed despite the drought, and then the unthinkable happens: Akash's father dies. (Sorry for the spoiler, but it happens pretty early in the book, your basic inciting incident.) Akash has barely stumbled through the mourning rites when the creditor comes calling and the boy's grandmother sends him to work in Kumar-ji's quarry, ostensibly to pay off the family's debts. Except—Akash sneaks a peek at the quarry ledgers and swiftly calculates that none of the workers ever actually get out of debt; their debt even increases. Determined to escape what is clearly a life of slavery, Akash hops a train and runs away to New Delhi, hoping to continue his math studies somehow.

Once there, he joins a little gaggle of boys living in the train station and becomes a street kid before he can find his way, or rather, Saraswati's way. Saraswati is the Hindu goddess of knowledge and the arts. Akash prays to her, worrying about his future. He also frets over the past, especially an odd incident with his father and a tortoise shortly before the man's death. Akash tries to figure out how his father's last words might be fulfilled, which seemed to indicate that he will be able to achieve his dreams. He eventually learns that the quick road to his goals is dishonorable and is not meant to be.

This is a fairly quiet book, or at least a serious one, but Akash's adventures keep it moving forward as readers wonder what he will do next and how he will fulfill his dreams. We also get an excellent introduction to what India is like. While the author's descriptions of New Delhi and various aspects of Indian culture occasionally feel pedantic, they provide an intriguing glimpse of a way of life that many young readers may never have encountered before.

In addition, we learn a little about Akash's math prowess and strategies, some of which are even derived from the ancient Hindu scriptures, the Vedas. (Saraswati is the Vedas's patron deity.) Math ability isn't always honored in children's literature, so this was a nice aspect of the book. I especially like how Akash uses his talent to overcome some of the problems he encounters. And, perhaps even more important, Akash learns to value his integrity. After a disastrous encounter with a drug dealer, he seems unlikely to compromise it again.

I'm afraid we really don't have enough reader-friendly books set in countries like India. Add Saraswati's Way to your list of multicultural titles about genuine kids living their lives in other lands.

And by the way, what a pretty cover! Did you notice the numbers literally written in the stars?

I will mention that Saraswati's Way feels a little rushed in spots. Lately, I'm beginning to suspect a conspiracy on the part of publishers pushing plots to move faster, ever faster! In any case, the book ends a bit abruptly, with solutions to Akash's woes which seem to come too easily. Then again, whether his fairy godmother is Saraswati or a kindly street vendor, I think you'll agree that this boy deserves his happy ending.

Note for Worried Parents: At first I thought this was a middle grade novel. Akash is 12 and seems very much a tween. But the mature situations push it over into YA—homeless children, glue sniffing, scary drug dealers, and, at one point, a vague threat from a man who's obviously a pedophile.
Posted by Kate Coombs at 11:35 AM

I've been wanting this one for a while...I shall continue to look forward to it1

Charlotte--Yes, I think you'd like it! Even though it isn't fantasy. :)