A Review of Close to Famous by Joan Bauer

You know how some authors are so reliably good that you simply buy their next book on auto-pilot, sight unseen? Joan Bauer is on that list for me. I especially liked Squash and Rules of the Road, but I've been pretty darn happy with all of her books. Now I've just finished her latest, Close to Famous, and while I wasn't quite as fond of it as I have been of some of her other titles, it nevertheless boasts Bauer's trademark strengths, including an appealing main character, colorful-yet-real secondary characters, and a small-town feeling of people pulling together to help each other. In my experience, this author's books are always feel-good reads, without being overly sentimental.

I was pleased to see that Close to Famous also features a main character who is half African American and whose mother is African American. This is inserted subtly, and once again (sigh) the jacket barely seems to indicate it. (Foster's hair is curlier in the book, for instance.) But it is there, I am happy to report. 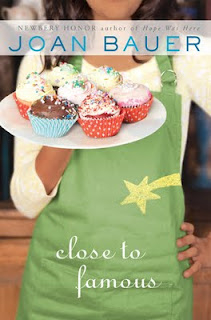 When the story begins, Foster McFee and her mother are on the run from Mom's abusive boyfriend, an Elvis impersonator. They find shelter in a small town where someone kind gives them a tow, someone else kind gives Mrs. McFee a job, and the tow truck people then give them a place to stay. I would like to think that this would really happen. I'm sure it has, somewhere out there.

But I haven't even gotten to the good stuff, which is that Foster is incredibly talented as a self-taught young cook, especially when it comes to baking. At the same time, she is incredibly un-talented at reading. In short, she can't read, though she covers it up like a champion.

Now, as Foster spends the summer making connections with people like a young would-be documentary filmmaker and the actress who's hiding out from the pain of her all-too-public dumping by a big-time Hollywood flame, she finds that her secrets are coming out.

Plus she's worried about the location of a certain pillowcase that contains the few items she has remaining after her soldier father's death in Iraq.

Will this young cupcake maker be able to get in touch with her hero, TV chef Sonny Kroll? Will Miss Charleena ever come out of her house again? Will Foster's mom be recognized as having a star's voice, not a backup singer's? Will Macon ever make a documentary about the new prison down the road? Will Foster learn to read?

Now for some quibbles... I have to say that I found the events of this book a little rushed. I wished for a slightly longer book to let things unfold more organically. Even so, I loved these characters and was hooked into their story.

The learning-to-read subplot felt didactic at times, yet it resonated with me overall, particularly because I have a dear friend who didn't learn to read till she was 18, faking it in all 11 of the schools her drug addict mother dumped her in for 10 years running. I am happy to report that my friend went on to get her GED and graduate from high school at the age of 32. (Like Foster, my friend has a learning disability. I'm guessing Close to Famous will be a Schneider Family Book Award nominee next year!)

One odd note: The author uses present tense for the first two chapters (the escape), then switches to past tense for the rest of the book. Plus there's a flashback in one of those chapters, which is of course in past tense. This back-and-forth with the verbs is distracting, but only for a few minutes, when you might find yourself, as I did, turning back pages and trying to figure out what's going on. It's smooth sailing after that.

In a Bauer book, however, strong characters, humor, and great dialogue far outweigh any minor concerns. For example, pay attention to the way Foster learned to cook in the first place—by falling hard for the art (initially with a friend) and working her butt off till she got it right, relying on listening and memory because she couldn't read the recipes. In an age when too many kids grow up scarcely lifting a finger to pick up their gym socks, it's great to see a kid who embraces a vocation and really puts in the required effort to make it happen. Eventually, Foster applies this same kind of effort to the far more daunting task of learning to read. Her determination and hard work are just a couple of the many nice things about this character. To begin to understand how endearing this kid is, watch Foster doing an episode of her so-far-imaginary cooking show:

I put on my shooting star apron, got out my baking pan, opened the refrigerator, and took out tortillas, tomato sauce, salami, and cheese.
"Today on Cooking with Foster we're going to make smiling pizzas for sad days." I put two tortillas down on the pan, spread red sauce over them, and sprinkled on mozzarella, garlic powder, and onion.
"Be careful the cheese doesn't go over the edge or it'll spill over on the pan and start smoking. That can make your whole kitchen stink. I'm going to turn the oven dial to four-fifty." I did that, smiling. "And now I'm getting my best knife"—I held it up—"and I'm slicing a thin round of salami into a smiley shape just like this. Don't make it too thick...."

Then Foster tells us about sad days and matter-of-factly relates that to losing her father in the war before she takes the mini-pizzas out of the oven.

Note for Worried Parents: This is listed on Amazon as a book for teens, though it reads as upper middle grade to me. Foster's mother is not extensively abused, but she does get hit by her boyfriend, who later stalks her and her daughter. That isn't the dominant story line, however; it's just one of many plot threads. I would be happy to share this book with middle school students and most fourth and fifth graders, as well.

Update: Peter D. Sieruta wrote about Close to Famous this week on his blog, Collecting Children's Books. He makes an interesting connection between an epic theatrical performance from his boyhood in Detroit and Foster's actress friend, Miss Charleena.
Posted by Kate Coombs at 11:52 AM

I didn't know she had a new book coming out. I love Joan Bauer, she's a "must" for me too.

I know, I was so pleased when I found out about this book!

I enjoy reading your diverse, attractive blog. I am fairly new at this and learn far more from observing what others do than reading the "Help" tips. (I suppose in teacher lingo that would be considered "modeling", huh?)
My blog (www.jumpup2chapterbooks.blogspot.com)
often requires reading sequential posts, so I have added an index. I decided to do that after noticing your list of "Favorite Posts".
I plan to see how the use of "lables" might help me after observing them in your blog.
I love your overall use of color, too. I probably should do more with it. Illustrating each chapter is as far as I'm currently using my art skills.
Thank you for being a terrific model for a "newby" like me. You may not have realized that you are communicating about so much more than books.
I'll continue to read and learn from you.

I think Joan Bauer is marvelous. I wish I knew more teenagers that I could send her books to. :P As it is I might get this for my mother for her birthday -- she loves Joan Bauer.

Thanks very much, Lynda! It's definitely a process. Best of luck with your blog!

Jenny, your mom has good taste. Now I'm trying to think which teens I know who might appreciate Joan Bauer... maybe the same ones who appreciate Sarah Dessen!