Numeroff and Bond are back with their eighth "If You Give" book, not counting related books with the same characters. Every time Numeroff publishes one of these babies, the question is asked: Has she exhausted this format? This—in essence—franchise? 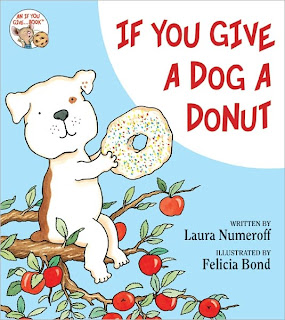 The answer is, no. Why not? Because Numeroff doesn't repeat herself. She doesn't need to repeat herself. The dog in this book (who, we are told, first made a cameo appearance in If You Give a Pig a Pancake) asks for things, like the mouse, moose, pig, and cat before him, but his requests are unpredictable. Random, even.

This should remind you of something: that's how little kids are. "Oh, look! A butterfly! Oh, wait, there's a school bus! And a piece of paper! And a grandma! And..." You see? This dog's meandering requests and momentary interests are not only delightful because they are surprising, but because they are an accurate representation of the flittering thoughts of small children. One more example: When I was teaching first grade some years ago, I remember leading two straight lines toward our classroom from the playground, only to have a child cry, "Look! A ladybug!" And suddenly 20 little bodies were clustered around her, trying to see this amazing sight.

So yes, Numeroff's new book works. I found some of the choices particularly appealing—when throwing an apple reminds the dog of baseball, he wants to play. And later, when he gets wet in the birdbath and is dried off with the boy's bandanna, he leaps to the idea of using the bandanna to play pirates.

In fact, this offering is perhaps the most clearly oriented toward boys of the entire series. Though girls can and do participate in all of the activities listed, they seem to have a certain amount of boy appeal.

Felicia Bond's artwork continues to charm, as well. Her dog makes you want to rush out and buy a puppy, or maybe give birth to a child, one of the two. Her sprinkle donut might make you hungry, and her kite is especially lovely, apparently made out of the color comic section of the newspaper. As always, Bond's style consists of simple lines with white backdrops. Visually, it should be easy for any toddler or kindergartner to follow.

I'll admit I was a bit cynical when I saw this one, but Numeroff and Bond have done it again: If You Give a Dog a Donut can stand in its own right as a book with strong kid appeal plus a dash of humor for moms and dads.

Note: HarperCollins sent me an ARC of this book.
Posted by KateCoombs at 6:56 AM

Labels: Felicia Bond, If You Give a Dog a Donut, Laura Numeroff, picture books