In case you didn't see it, a couple of years ago I spotlighted some wonderful Christmas books. Here's the link for your holiday enjoyment! 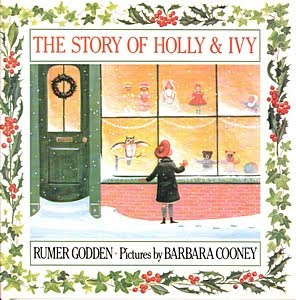 Still, I feel I was remiss in not listing one of my very favorites in that post: Star Mother's Youngest Child by Louise Moeri, illustrated by Trina Schart Hyman. It's a small book, and it's written a little like a folktale. One Christmas Eve, a cranky old woman who lives alone in the woods rocks in her rocker, complaining to the universe and her dog, Uproar, that just once she'd like a proper Christmas. "Is that too much to ask?"

Meanwhile, up in the heavens, Star Mother's youngest child is fussing and fretting. It seems he would like to go down to earth and experience Christmas, just once.

You'd think this match made in heaven would play out predictably, but it doesn't, not really. When the little star shows up on the Old Woman's doorstep, he isn't at all pretty.

The Ugly Child stood blinking and shuffling on the doorstep. He seemed as nonplussed upon seeing the Old Woman as she was upon seeing him. 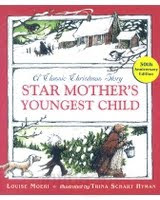 "Well?" shouted the Old Woman again. "What is it you want? We'll both freeze to death with the door open while you stand there tongue-tied."

"I was looking," said the Ugly Child at last, "for Christmas."

With a howl the Old Woman threw up her hands. "Mercy! Mercy!" she cried. "To be wakened on a freezing day like this by a vagabond whose wits have evidently frozen too! Looking for Christmas! I'll be bound—and where did you expect to find Christmas? Here?"

The Ugly Child peered past the Old Woman into the poor little hut. He carefully took in the shabby furniture, the bare table, the sparse stores of food and clothing. "Well," he muttered, "here is where I am."

Even as the two slowly 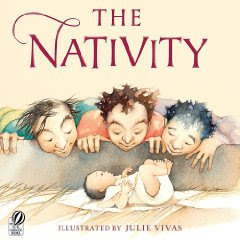 Look for this odd, wonderful little book as you celebrate the season.

(My second favorite is Rumer Godden's The Story of Holly and Ivy, illustrated by Barbara Cooney. Well, it's a tie with Julie Vivas's The Nativity!)
Posted by KateCoombs at 6:21 PM

Thank you for sharing some of the older classics. I think Star Mother's Youngest Child is so much more than a Christmas book, a beautiful story.

Yes, there's something really moving about this book, whether you are a Christmas celebrator or not!