A Review of Friends with Boys by Faith Erin Hicks

I'm surely not the only one who will immediately compare this graphic novel from Canadian author Hicks to Anya's Ghost by Vera Brosgol. After all, it has a similar visual style with its stark black-and-white illustrations, it's about a high school girl trying to get along socially, and it features a ghost. Which makes it sound, in thumbnail form, derivative, until you read the book and find out that it really, truly is not. Friends with Boys is a wonderful book in its own right. 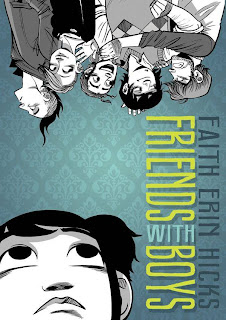 Maggie is starting high school, which would be scary enough, except that she has also been homeschooled her entire life—and the mother who taught her has abandoned the family. Maggie would like to think her three older brothers could give her some support, but her oldest brother Daniel is busy with his many friends and theater, while her twin brothers Zander and Lloyd are locked in an epic battle of their own.

At her new school, Maggie does make two friends, peppy Lucy and her moody brother Alastair. But she wonders what's going on between Alastair and hotshot soccer captain Matt. Then there's Maggie's shortcut through the cemetery on her way home, which brings her into contact with a sad-looking nineteenth century woman ghost. Eventually she learns who the silent ghost is and why she is sad, but what does it have to do with Maggie, who feels like the ghost is following her around?

This book is made up of small incidents, like the fact that Maggie's father finally cuts his longish hair short and how that bothers Maggie. But the incidents add up to matter, just the way they do in real life.

Hicks's characters are so angular that they sometimes look older than they are, especially the boys with their strong noses and jaws. But I soon got used to her style. And Hicks is a dab hand at dialogue, not to mention humor. The high school play Daniel stars in is about zombies, for example. Here are a few lines that come up after the play:

"You were great in the play. I completely believed you were horribly killed by zombies." 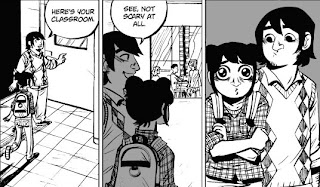 I like the way Maggie's brother Daniel is popular, but with a different group of kids than most books show, and he is a little chunky. There is a bullying theme here, but it's not handled in the usual way. Hicks manages to create a minor mystery out of that subplot, and we find that boys have their struggles and secrets, just as girls do.

I should mention that this story is not about high school romance, though there's just a hint of it in spots. Being friends with boys seems to have as much to do with Maggie's brothers as with people like Alastair. I found this rather welcome! Maggie has enough on her plate without a gigantic romance, too.

Besides the challenges of being the new girl and bullying, two themes at the heart of the book are sibling loyalties—especially when they are tested—and the pain of a family whose mother has left them. This is all handled subtly, building beautifully to a quiet but satisfying conclusion. Hicks is not into easy answers, but the answers she does give are real and possible and right.

Scoot Anya's Ghost over on your book shelf and make room for Friends with Boys!

Also: See Page by Paige by Laura Lee Gulledge, another graphic novel about a shy high school girl who's new in town and finding her place in the world.

Note: I will be at a history education conference in Kansas City next weekend, so I won't be posting. But then I'll come roaring back with my annual Pistachio Awards the weekend of March 31.
Posted by KateCoombs at 7:13 AM

I'm glad you reminded me of this one. It's on my wish list. I read Anya's Ghost, so I'm definitely interested in this one.

This book was awesome. You know you can see it on her website right?

Adriana--I did not know that. Thanks for the heads-up!