A Review of Page by Paige by Laura Lee Gulledge

The July/August Horn Book Magazine features the ALA awards winners and their acceptance speeches. I was especially touched by Caldecott winner Erin E. Stead's speech and her husband Philip C. Stead's article about his wife. It turns out Erin is painfully shy and has experienced periods of extreme self-doubt about her abilities as an artist. As Erin put it in her speech:

Philip always knew I should make books. I did not. I thought I was too serious, my pictures too tiny and quiet to hold their own on a bookshelf. This was a career I deeply admired and respected but felt I did not deserve. And maybe couldn't handle. 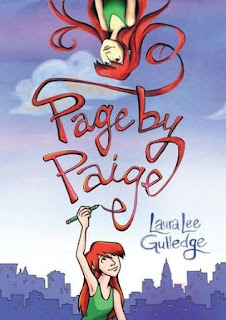 I was reminded just a little of Erin E. Stead when I read Laura Lee Gulledge's graphic novel, Page by Paige. Actually, it's closer to being a graphic journal than a novel, and I definitely don't mean that in a Diary of a Wimpy Kid way.

Introspective teen Paige has just moved to New York City from Virginia, and she is struggling to adjust. She is also struggling with her desire to define herself as an artist. This book is a record of her journey. (All done in black and white, by the way.)

What's really nice is the way Gulledge has Paige mix visual metaphors into her storytelling. For example, when Paige says, "I've been giving myself a lot of pep talks in my head lately," we see in the next drawing that the sign over the high school entrance says "BE AN EXTROVERT" instead of the school's name. On the next page, as Paige goes up the hall, she sees a hand-lettered sign on the wall reading, "Psst, Paige, You Belong Here." Below, as Paige writes, "I tell myself that everyone else feels alone, too," we find a drawing of a lake with dozens of teens paddling around in very small boats, each isolated though surrounded by others. These images ebb and flow nicely as Paige goes about finding her way in a new place.

The detailed depiction of Paige's worries and self-analysis might strike more confident readers as self-absorption, but I'm guessing many teens (and adults!) will relate to her self-consciousness. Paige's conflicts with her well-meaning but intrusive parents are another plot thread that will feel familiar to a lot of young readers. This relationship is not unrealistically one-note, though: At one point Paige shares a joke and a hug with her dad, and her parents are fairly sympathetic characters as they try to understand how their daughter is doing.

Happily, Paige falls in with a great little group of new friends who not only help her to feel less isolated, but who support her blossoming as an artist. With Jules, Longo, and Gabe cheering her on, Paige starts up an art blog and even designs some guerrilla street art projects. For example, at one point she and her friends leave a bunch of plastic Easter eggs around town, each filled with a message or a small token like a Hershey's Kiss or a feather.

Paige's friends are appealing individuals in their own right: Jules, the lesbian singer whose lyrics combine things like vampires and robots; her brother Longo, a goofball and, like Paige, a closet artist; and Gabe, a quiet boy and a writer.

Paige continues to struggle with self-doubt in the face of setbacks, but mostly she quietly grows more confident both as an artist and as a person. Her budding romance with Gabe is especially lovely: their kindness to each other is what you really want to see in a teen relationship, or in any relationship, really. Paige's joy in her new boyfriend and in their tentative kisses is, of course, depicted in part by more symbolic drawings.

Paige also works things out—to a reasonable extent—with her parents. This book is basically a coming-of-age story, as Paige goes from a place of fear to a place of becoming her promised self. Each section of Paige's sketchbook begins with a "rule" Paige assigns herself as she tries to be more adventurous, more confident, and more open about her artwork. For example, Rule #3 is "Shhh... quiet... listen to what's going on in your head." Here's a complete list of Paige's art/life rules all in one spot.

I would especially recommend Page by Paige for shy, thoughtful, and creative teens.

Check out Laura Lee's blog, which should give you a hint that the book is fairly autobiographical, at least when it comes to art, self-doubt, and depression. Gulledge is also involved in doing some very cool community art. We've got a "motion comic" book trailer for Page by Paige, body painting (PG-13), new drawings, and live mural painting—and that's just mid-July through mid-August! That's more of a blog for grown-ups, though, actually; another one is aimed strictly at teens and other people interested in this YA graphic novel (and future projects for YA readers).

Posted by KateCoombs at 2:41 PM

Ooh, this looks wonderful. It's definitely going on my wishlist!

I am so glad you reviewed this. I read this book months ago, and am glad you enjoyed it. I absolutely loved it! It's a great book for teens who express themselves through drawing, and even those who don't.