Clover Twig is practical. Clover Twig is brave. And Clover Twig needs a job. So when she finds out that a woman everyone says is a witch is advertising for a "STOrNg gRIL To CLEEN," Clover happily applies. Having gotten past a cranky talking gate, she soon proves her worth to Mrs. Eckles and is hired. Clover ignores her family's worries and settles into the new job—which proves far more interesting than originally anticipated. 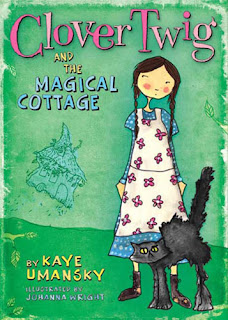 You've gotta love a book with chapter titles like "First Off, Are You Stupid?" (That would be part of the job interview, of course. How many interviewers over the years have wanted to come right out and say THAT?)

Clover Twig and the Magical Cottage is a cheerful, rollicking story, which is one of my favorite kinds of fantasy. Clover eventually realizes that a mysterious enemy is after something in the witch's cottage, or possibly after the cottage itself. She is joined in her adventures by a klutz named Wilf who has no idea that he is already a pawn in the hands of a bad witch named Mesmeranza.

In counterpoint to Clover's story, the author lets us in on what Mesmeranza is up to. The spoiled villainess reminds me of the evil sorceress in Vivian French's The Robe of Skulls. At least, Umansky's Mesmeranza would really appreciate that robe. After all, she lives in a castle and collects great shoes. She also has a Plan, along with a motley crew of minions who are some of the most entertaining characters in this book—among them Miss Fly, the cat-loving (and cat-allergic) secretary, plus a couple of dungeon keepers named Humperdunk Chunk and Jimbo Squint. The sorceress's plans, which include leaving enchanted cakes on the cottage doorstep, are endearingly melodramatic. I almost feel sorry for Mesmeranza because, being a woman, she can't grow a long moustache and twirl it while practicing her evil laugh.

Naturally, Clover and Wilf end up in Mesmeranza's dungeons after failing to protect Mrs. Eckles's magical property. But never fear: they're sure to escape and save the day. Clover Twig is clever as well as funny, and it has prompted me to order a copy of one of the author's previous books, Solomon Snow and the Silver Spoon. In a year of sometimes indistinguishable fantasies, many of them ponderously dark and YA-ish, Clover Twig and the Magical Cottage offers middle grade readers a refreshing change.

Note: Umansky is a British author, and this book was originally published in Great Britain with a more spoilerish title. See also my post on British whimsy from April 18, as Clover Twig qualifies!
Posted by Kate Coombs at 9:19 AM