A Review of Desperate Measures by Laura Summers

In my June review of Small as an Elephant by Jennifer Richard Jacobson, I compared Jacobson's book to Cynthia Voigt's Homecoming. Now Laura Summers' new book compares nicely to both of them. Only instead of children being abandoned by their troubled mothers and running away in search of some kind of home, here we have three siblings who run away just before they are going to be split up and sent from a foster setting they share to two or three different places.

This title is a candidate 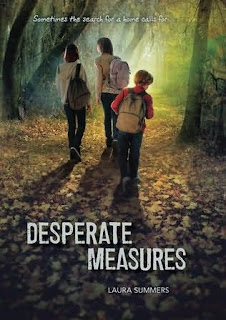 for the ALA's Schneider Family Book Award, since one of the three siblings is disabled. Vicky's twin sister Rhianna was oxygen deprived at birth and suffered brain damage. When their foster mother goes into the hospital due to complications with her pregnancy, the social worker threatens to put Rhianna in an institution for special needs children and find other placements for Vicky and her feisty younger brother Jamie. Responsible Vicky isn't the one who thinks up the idea of running away, but she soon gets into the spirit of things and the three head off in the direction of their great-aunt's lakeside home.

Three aspects of the plot stood out for me: first, the adventure that comes from being on the run; second, the interactions between these three kids, especially their frustrations and differences; and third, the question of where their absent father is—why he hasn't been caring for them and whether he might be able to do so again. These plot threads are nicely intertwined, but the interplay between the siblings is probably my favorite part of the book. I should note that Rhianna and Vicky take turns narrating, and Summers does a good job of differentiating between their voices and personalities. Here's a sample of Vicky's voice on the twins' birthday:

Rhi gave me her card, and I made a massive fuss over it. I knew she'd been making it for about two weeks, but I pretended it was a big surprise. It was like the sort of thing Jamie used to bring home from preschool, all smudged with paint and big, wonky letters. I gave her another big hug and told her it was my best card. She looked so proud, I knew she believed me. Then I gave her a present, a Furby—she's wanted one for ages—and, thinking maybe this was a good time, I broke the news that she'd have to walk to school with Jamie. I didn't want to look after her, today of all days. She'd spoil everything. She always did.

Whoa! Big mistake. You'd have thought I'd told her she had to stick her head in a bucket of worms, she made such a fuss. Talk about an instant thunderstorm.

The thing is, Vicky is going to walk to school with a boy, a boy named Matt who's the cutest guy in her class. And now let's hear from Rhianna:

All boys are vom. And boys called Matt are the vommiest of all. She could have let me come. I wouldn't have said anything. I would have walked behind them—they wouldn't have known I was there. I can walk really quietly, even when I've got my clodhoppers on.

I hate walking to school with Jamie. Something always happens. This time he said we had to go past one of the houses really quickly in case some boy saw us, and he did, so Jamie shouted, "Leg it!" and we had to run. He nearly made me fall over because we were going so fast. I got a stitch, but Jamie still wouldn't stop. We ran up to Sam's house (that's Jamie's friend) and banged on the door. Sam's mom answered, and the boy ran off shouting that he and his friends were going to beat Jamie up after school. Jamie yelled back that he didn't care, but his face went all chalky like it did when Mrs. Frankish told us that we weren't allowed to live with Dad anymore.

Desperate Measures takes our threesome across the countryside, where they are constantly on the verge of being turned in by well-meaning adults. At one point, they find a haven with an old woman living alone in a crumbling manor house ("just like the one from The Lion, the Witch, and the Wardrobe"). Later they hide near their aunt's home in a cave which turns out to "belong" to a sad boy named Daniel. Daniel tries to help them, though he is easily offended. Eventually real life catches up with the fugitives, and it is ultimately Rhianna who puts her foot down, determined to make things right. Then Vicky chimes in and, well, there's hope for these three kids.

Summers also throws in a little romance between Vicky and Daniel (since Matt turned out to be uncomfortable with Vicky when things got tough). Bullying is another theme in the book—both in Jamie's life before the kids go on the run and again at the lake. How can these siblings help each other in the face of bullying, and how can Daniel, like the Cowardly Lion, find his courage?

None of these young protagonists are perfect, any more than their lives are, but when push comes to shove, they are loving and loyal. I think you'll find yourself rooting for Vicky, Rhianna, Jamie, and Daniel to be happy and safe in an unpredictable world.

Note that Desperate Measures was first published in Great Britain, where it made a number of awards lists. (Hmm. Maybe it won't be up for a Schneider, after all.) In this Guardian article about the book making the shortlist for the Waterstone's Book Prize, we learn that Summers, a television writer, was inspired to write the book by her own disabled daughter. She says, "I've got a daughter with a learning disability [and] I felt there weren't any role models for children with disabilities and their siblings.... But I didn't want to write a story which was just about disability–I wanted an adventure story too, which was exciting, so it would appeal to as many children as possible."

I'm here to tell you: she succeeded!

Note for Worried Parents: At one point, there's an attempt by a scary guy to entice Rhianna away, but Vicky rescues her pretty quickly. The bullying and lack of parenting might bother some younger readers.

Posted by KateCoombs at 2:23 PM

This sounds interesting and I hadn't heard about it yet. Thanks for reviewing it, I'll be looking for it now!

Brandy--You're welcome! I was in a realistic fiction mood this week, as you can see.

Your Squirrels stuff::: So what is the purpose of squirrels buring rocks all around my yard. Some big ones lay on top but most of the smaller ones are under the moss. No other indication they are there??

Scrubber--Aha, you've visited my website! Can't say for sure, but my guess would be it's young squirrels practicing burying nuts. I do know they try to crack open rocks, thinking they're nuts. And they also practice burying nuts. So maybe that's what they're up to in your yard.