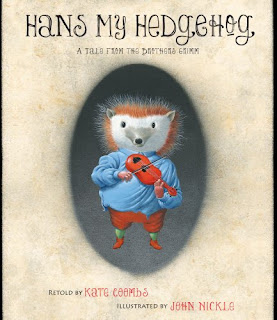 I have some fun news about my own books, not to mention a review of Michael Chabon's picture book, which turns out to be related.

First, I'll just remind you that my retelling of the Grimms' tale, Hans-My-Hedgehog, will be out on January 24 and is already up on Amazon. John Nickle is the very talented illustrator. At the moment, my website designer Barb Aeschliman and I are busy working on a hedgehog page (much like my frog and squirrel pages).

Second, I now have cover art for my collection of ocean poems, Water Sings Blue, which is also up on Amazon and has a pub date of March 14. Isn't it pretty? Meilo So is the illustrator, and her interior artwork just knocks my socks off. Interesting note: Meilo lives in the Shetland Isles. (I discovered this while trying to FedEx galleys when they wound up at my house instead of hers!) 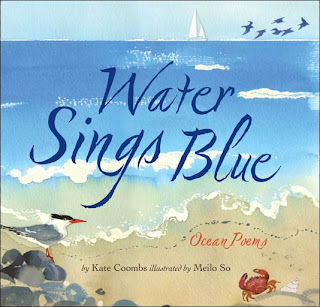 Third, I have had a picture book manuscript waiting for an illustrator at Atheneum for quite a while now, and voilà! The Tooth Fairy Wars will be illustrated by Jake Parker. Check out his website. You can expect this book in late 2013 or early 2014.

Jake is known for his comic series, Missile Mouse, and for his work on animated films like Horton Hears a Who and Ice Age: Dawn of the Dinosaurs. His most recent project is Michael Chabon's picture book, The Astonishing Secret of Awesome Man, which came out on September 6.

In case you haven't seen it, this book tracks the adventures of a superhero and his sidekick, Moskowitz the Awesome Dog. Here's how the story begins:

Hi! I'm a superhero. My name is Awesome Man.

I have a cape as red as a rocket, a mask as black as midnight, and a stylin' letter A on my chest.

The superhero goes on to list some of his superpowers (shown in application in the illustrations) and to recount his adventures with villains such as mutant talking Jell-O from Beyond the Stars, Professor Von Evil, and the hero's arch nemesis, the Flaming Eyeball. 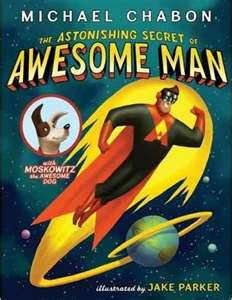 But our superhero has his down moments, and we see him returning to his Fortress of Awesome under the Arctic Ocean to try and get a grip.

Parker's comic style art suits this superhero story. He even uses dot backgrounds like old newsprint comics in some of the early spreads. I like the way his fortress, while under the sea and the eye of a passing whale, is a suburban home beneath a set of glass domes. Despite the smoothness of the rendering, Parker can show his square-jawed hero sulking as well as preening.

As for Chabon's text, it's a tad tongue-in-cheek—watch, for example, for a supervillain named Sister Sinister. The wording has a nice casual tone, as in this excerpt:

I fly west. I fly east. I fly eight times around the earth and all the way to the heart of the sun. (The Flaming Eyeball hangs out there sometimes.)

Chabon is, of course, best known for his adult fiction, e.g., Pulitzer Prize winner The Amazing Adventures of Kavalier and Clay, but he has also written a YA (upper MG) novel, Summerland, which I quite liked.

I noticed that some Amazon customer reviewers were complaining that Chabon's new picture book doesn't have a stronger plot, but I think they're missing the point: this one is intended to be a profile of the superhero, not Die Hard 3. (If you want more plot in a picture book along these lines, try Barnett and Santat's Oh No! Or How My Science Project Destroyed the World.) I will say, the ending of The Astonishing Secret of Awesome Man isn't quite my cup of tea, but young readers will probably like it. For the kid who's a bit too young for Vordak the Incomprehensible, Chabon's new book may be just right.
Posted by KateCoombs at 5:22 AM

kate! I just love the cover of Hans My Hedgehog. He is soooo adorable. And I can't wait for Ocean Sings Blue, either.

Thanks, Shelley! Hans IS a cutie! (The image appears inside with a tear running down his cheek.)

Hans My Hedgehog looks absolutely beautiful!! As does your poetry book! Congratulations!! What wonderful times for you! M

Thank you, MV and Charlotte! It's starting to get close enough to these pub dates to feel real. :)

Hey Kate, I was hoping for some help. I want to find a book but I can't remember the name. I've tried posting about it on Goodreads but no such luck. SO I was wondering if you might know the name of this book. All I can remember about it is that it is a young adult book, from a girl's perspective. And she goes to visit or stay with her aunt that she doesn't really know/like. And she gets a job in a cafe, and meets a boy named Gabe, who has a sister and in the end Gabe dies of cancer?

I've tried googling it but also to no such luck. If you cannot help, that is positively fine. Please and thank you, Kirsten.