A Review of The Magic Cake Shop by Meika Hashimoto

Emma is a terrible disappointment to her parents, who are what you would get if you crossed Roald Dahl with People magazine. Take a look at how the story begins: 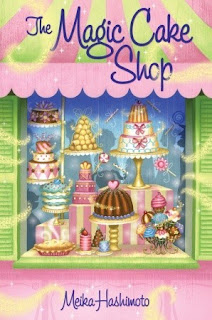 When Mrs. Burblee went for a walk, many a man tripped over his feet in a rush to say hello. If Mrs. Burblee said hello back, the goggle-eyed man usually fell off the sidewalk, sometimes into oncoming traffic.

Mrs. Burblee took this as a compliment.

When Mr. Burblee took a ride on his motorcycle, he liked to grin at the lady drivers at stoplights. They usually fainted. In the past year, Mr. Burblee had been responsible for eighty-two traffic jams.

He liked to keep count.

In between causing traffic accidents, the Burblees spend their time "powdering, perfuming, and polishing." They also sit around and talk about how beautiful they are. Oh, and write odes to Mrs. Burblee's feet.

What they don't talk about is their daughter Emma, who is neither polished nor beautiful. They put her on a diet and everything, but the child is grubby. Also interested in starving children in far-off countries and other topics that have no appeal whatsoever for the Burblees. She even wants to learn to bake fattening desserts! After she embarrasses them at a dinner party supposedly held in honor of her tenth birthday, they send her off to live with her awful Uncle Simon.

Simon has a Roald Dahl pedigree, as well. (Think The Magic Finger.) He loves to hunt and kill small animals. He loves to make Emma's life miserable, too. She has to cook and clean for him. Cooking usually means making "backyard stew," composed of squirrels and songbirds Simon has slaughtered. Except—Emma discovers a wonderful cake shop when her uncle sends her out to get huge amounts of pastries (for him, not her).

To Emma's delight, magical baker Mr. Crackle takes her under his wing. Other people in the town of Nummington also reach out to her with kindness, and Emma begins to feel cared for for the first time. She is beginning to be truly happy when an evil stranger shows up at Uncle Simon's house. He has plans that will make a lot of money, but he intends to use Mr. Crackle for his unpleasant schemes. To protect Mr. Crackle, Emma interferes with their plans, only to watch them come up with a new and more horrible plan that will involve the gifted baker, anyway.

Not that these two villains are a match for Emma and Mr. Crackle—but before they win the day, things will get rather poisonous.

Hashimoto has a clean and upbeat style as she tells a delicious little story of villains and magical pastry making for younger readers. I think 7- to 9-year-olds would be the best audience for this one. Note that bits and pieces of her plot require some extra suspension of disbelief, but who cares? All I know is I want a magic cake shop in my town!
Posted by KateCoombs at 11:40 AM

Bit had this book in her hands at a bookstore recently but ended up getting something else instead. (I can't even remember what.) She probably should have stuck with this one. I think she would like it, little baker that she is. (By the way, that cake mix book I got her that you said came from your place of work is the best thing that has happened in this house in a looong time.)

It's a very sweet little book! And I'm glad you liked the cake mix book from Gibbs Smith--I got one for a Sub for Santa family this year.

I'm not a fan of theDahl sytle, but the cover is so pretty that I will have to take a look. And a magical cake shop...how could it go wrong?

I probably won't be reading this...being just a tad to old...but I just wanted to share the fact that I myself have dainty earlobes. Earlobes in general are rarely mentioned in fiction....

But it does sound like a fun little book!

Ms. Y--It's not that Dahlish throughout, actually. And it's a skinny book, which is appealing to a lot of kids, as I'm sure you know.

Charlotte--You're in rare company! Yes, the book is a little young, but still fun. Grab a cupcake and give it a shot!

I loved the excerpt. I'd love to get this one!

Sounds like fun! Thanks for the review, I may have to check it out. :)

This sounds like a fun book. I just finished Matilda and your review does a slight feel of Roald Dahl. Also - I love the title of your blog. May everyone have a book aunt!!

Camille--I wish I had one! I have a book sister, though, so that's okay.