A Review of Winterling by Sarah Prineas

Grand-Jane is always trying to keep Fer in the house, to keep her hidden from a nameless something that apparently lurks outside. But Fer can't bear to be inside. The outdoors calls to her, and she runs from the house often, incurring Grand-Jane's wrath. 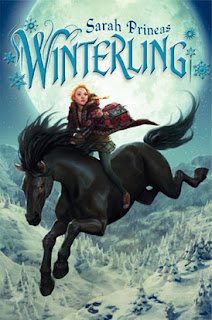 comes across a strange scene in the woods by a mysterious pool: three wolves tormenting a dog. Fer picks up a stick and helps the dog, only to have him turn into a boy. When Fer brings the boy home so Grand-Jane can patch him up with her herbs, Grand-Jane is furious. But she finally relents and tells Fer the truth: Fer is from another world, or at least, her mother is. Grand-Jane is pretty sure her son and his otherworldly wife are dead. She has tried all these years to protect Fer from whatever enemy took her son from her.

Fer is not only fascinated, but she is also determined to visit that other world and find out what happened to her parents. (She knows she shouldn't trust the dog-boy, Puck, but she kind of does.)

This is the last of the scene with Puck and the wolves:

Fer held her ground and gripped her branch tightly. "Go away!" she shouted, and with her free hand felt in her jacket pocket for her bag of spelled herbs. She pulled it out and kept it clutched in her hand. One wolf lunged toward her and Fer stepped up to meet it, bashing her club across its muzzle. Fer swung the branch back and caught another wolf in the ribs, then jabbed the jagged end of the branch into the face of the third wolf. Still holding the spell-bag, she shouted, "Go away!" again, then a third time, and the wolves flinched back as if her words had more power than the club she swung, watching her from the corners of their eyes, fading back into the shadows.

What Fer doesn't realize is that she has already opened a gate between the two worlds with her rescue efforts, and trouble will follow. Soon enough she travels to the other side and meets its so-called queen. The Lady casts a spell on Fer, a glamor that makes Fer want to help her. But Fer keeps seeing through the spell. As she travels with the Lady's retinue, Fer begins to befriend the Lady's followers and uncover her secrets. There's a reason the Lady's followers are wilding and spring won't come. Fer's heritage gives her the strength to defeat the Lady—if only she can figure out who to trust.

Some of the story is told from the point of view of the puck, Rook. Especially while Fer is under the wicked queen's glamor, this allows us to see what the Lady is really up to and to root for Rook and his fellow slaves to be free. It also makes us even more worried about Fer, who is basically in her enemy's grasp. The Lady is trying to figure out how best to use the girl, whether to simply manipulate her or to strip her of her power altogether.

Meanwhile, Fer keeps saving Rook's life. It's almost a running joke how often she does it. His oath to the Lady, for mysterious reasons of his own, keeps him in the enemy camp, but readers will wonder whether Rook will manage to help Fer just the same.

I like Prineas's use of Irish legends in this book. For example, the Lady is also called the Mór, which is clearly another name for the Morrigan, the goddess of battle, strife, and fertility. In Winterling, the Lady marks her followers with crow's feathers, and the Morrigan is associated with crows. In fact, the crow is one of her forms. The shape-shifting Phouka/Puck is another figure from Irish legend, though he may make you think of Shakespeare.

The plot of Winterling doesn't twist and turn much, and the cast of characters is perhaps too limited: we're basically talking Grand-Jane, Fer, the Lady, Rook, and a bunch of miserable minions. I can't say Winterling is an amazing read, but it is a pretty good one. If you have an avid middle grade fantasy fan in the house, put this book on your list.


Take a look at the book trailer or visit the author's website. And here's an interview with Sarah Prineas at The Enchanted Inkpot.

Posted by KateCoombs at 9:00 PM

I have a review of this scheduled to post on Tuesday. I am going to add a link to this if that is okay. I didn't know all that about the Irish legends.

I really enjoyed this despite the lack of twists and limited characters, mostly because I enjoyed Rook so much (and the multiple life saving moments).

Sure! Also, the author will be interviewed at The Enchanted Inkpot on Wednesday, so that would be a good link. (I'm going to add it when it comes through.) Rook is definitely a great character!