A Review of In the Sea by David Elliott, illustrated by Holly Meade 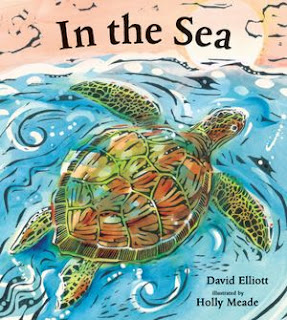 True confessions—one reason I wanted to get my hands on this book was to check out the competition since my own collection of ocean poems came out about the same time. But not to worry; I quickly fell in love with David Elliott’s collection for its own sake.

Let’s start with Elliott’s dedication: “To the Gulf of Mexico and all that depends on it.” Nice, right? Then you read the poems. As a reviewer of a previous book put it, Elliott’s work is “pithy.” My own word for the poems is “concise.” Here is “The Shark” in its entirety:

The fin,
the skin,
the brutal grin…

The terror
of the dark within.

Which pretty much says it all. In fact, in a positive homage to brevity, on one spread Elliott gives us four one-word poems for the urchin, the sardine, the mackerel, and the shrimp. Or rather, since the words in the poems all rhyme, this is a four-word poem—or maybe four linked poems. I’ll let you discover them for yourselves.

Some of my other favorites are “The Clown Fish,” with its commentary on the fish’s relationship to the anemone and on friendship in general; “The Moray Eel,” with its strong adjectives and two excellent metaphors; and “The Chambered Nautilus,” with its philosophical spin. The book ends with a marvelous poem about the blue whale that begins on a full spread and then departs in dramatic fashion in a single word on the very last page.

The illustrations are just as strong, done in woodblock prints (black ink) and watercolor. The printed black lines not only outline, but highlight details, as you can see on the cover image of a sea turtle. It’s a striking combination.

I was happy to discover that In the Sea is the third book in a series of sorts; the first two are On the Farm and In the Wild. Look for them, too—they’re just as beautiful, also illustrated by Holly Meade.

Posted by KateCoombs at 7:27 AM