Some picture books are wonderful because they sing out like a brass band, but others are just as marvelous because they murmur like a night wind. Here are three such books.

Unspoken: A Story from the Underground Railroad by Henry Cole

Making a picture book that’s wordless is usually more of a storytelling choice than a symbolic one, but here the wordlessness is both, as the title implies. This is a story about keeping quiet for all the right reasons, about keeping a secret to keep someone safe. It is also about not needing to speak to help someone out—which makes me think of quiet kindnesses in everyday life. 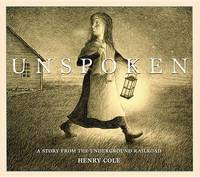 As our story begins, a young farm girl bringing the cow home from the pasture watches five men pass on horseback. The first one is carrying a Confederate flag, so we understand that this story takes place in the South during the Civil War era. The girl goes to feed the chickens, and then her mother sends her to fetch the eggs from a small barn. As she does so, she is frightened to realize that someone is hiding in a big stack of corn stalks laid in one corner of the barn, perhaps to dry for feed.

The girl runs back to the house, but even before she goes inside, she starts to calm down and think about what this means. She does not say anything to her family, but after dinner she goes out to the barn with some food for the fugitive. Perhaps my favorite part about this story is a spread showing different hands holding different food items on the same checked cloth—showing that each member of the family separately slips out to the barn to feed the runaway slave hiding there.

The next day two men come to the farm looking for a runaway slave, but the girl’s family sends them away. That night the runaway is gone, but she has left a simple gift behind for the girl, something she has made from the checked napkin and the corn husks. 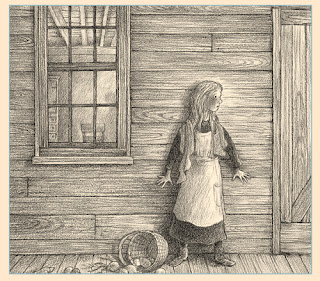 A good picture book is like a poem. It is hard to tell a story well in just a few words or just a few pictures, but Cole succeeds beautifully. The entire book is done in charcoal pencil on cream-colored textured paper, giving it a sepia look like photos from the late 1800s as well as a subtle richness. The North Star, or rather the Little Dipper containing the North Star, is a motif used in a piece of art that appears on the book cover and inside the book; it is also shown on two other spreads, tying the story together.

Unlike a graphic novel, the picture book format does not allow for a lot of sequential storytelling, but Cole has chosen his moments well, and the narrative flows logically. I like the way he shows most scenes at a medium distance, but includes the occasional close-up. One of the best spreads in the book is simply all those corn stalks with their marvelous texture—and one eye of the hidden girl looking out.

Cole includes an author’s note that explains about the Civil War stories he heard as a boy growing up in Virginia, as well as more information about how slaves used the North Star to guide their escape to freedom.

Unspoken may require you to use a few words of introduction to give young readers historical context. But the sense of quiet urgency, the threat of discovery, the courage of the runaway, and one farm family’s kindness need no words, as Henry Cole so wisely shows us.

I knew a guy in Los Angeles who created original artwork using photographs of beetles. They were really gorgeous, so it’s no surprise to me that the beetle art in Jenkins’ latest nature book is, too. The cover alone is worth the price of admission! 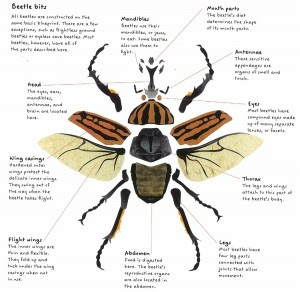 I will admit I was a little put off when I first opened the book and saw how small the font size is, but I quickly got used to it and realized that its size means the text doesn't compete with the illustrations. Beetle names are in boldface in the text, which is helpful. Another nice touch is that the author-illustrator gives us many of the beetles in black silhouette to show their actual sizes.

Jenkins lets the stark white backgrounds set off the beetles’ strong colors and shapes, taking full advantage of negative space and the beetles' symmetry to create graphic art-influenced illustrations. Many of the beetles are static, portrait-style, but some are shown in action, most notably two rhinoceros beetles dueling to win a mate. The illustrations are all the more breathtaking when you realize that they are done entirely using “torn- and cut-paper collage.” Jenkins has joined the rarified ranks of Eric Carle and Lois Ehlert in his use of the technique.

The science content may remind you a little of an Eyewitness book. The Beetle Book is filled with fun facts. For example, have you ever heard of the forest fire beetle? "[It] has special heat-sensing spots on its body. It can detect a fire from more than 20 miles (32 kilometers) away. These beetles fly to the site of the forest fire and lay their eggs in charred wood—wood that is now free of predators." I thought he was going to say the beetles sensed the fire and flew away from it, but instead the beetles fly to the fire! 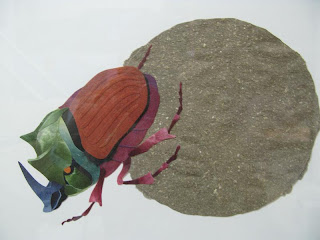 Stinky beetles, shiny beetles, poisonous beetles (if you eat them!) and camouflaged beetles—Jenkins introduces readers to a colorful cast of characters. One of my favorites is an Australian beetle called Wallace’s longicorn, which has a body that’s not quite 4 inches long and antennae that can reach 15 inches or so in length. (Illustration above is a dung beetle.)

I’ll just end with one final fact, Jenkins’ opening sentence: “Line up every kind of plant and animal on Earth… and one of every four will be a beetle.” So yes, we’re outnumbered. But if you’ve got a budding scientist on your hands, get him or her The Beetle Book.

Here’s Chris Marley’s website if you want to see his beetle art and other pieces.

Also: See The Beetle Book cover art below at the end of last week's post.

The Moon Jumpers by Janice May Udry, illustrated by Maurice Sendak

This is a golden oldie, a Caldecott Honor Book back in 1960, predating Sendak’s 1964 Caldecott Medal for Where the Wild Things Are. I am happy to bring it up now because Harper Collins is reissuing the book in February. So just how well does The Moon Jumpers hold up? 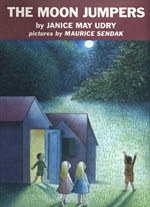 It is retro in two obvious regards: it’s a quiet book, and the dad in the book smokes a pipe. The text of the story would be a real hard sell if Udry sent it out to Scholastic or any other publisher today. Fortunately, she sold it in a kinder, gentler day, and then Sendak’s illustrations made a slight story into something significantly more magical. Basically, four kids go outside and play around. Then their mom calls them in and they go to bed.

So what does Sendak do with this material? He adds a cat, for one thing. He shows how four kids can make a game out of anything, including a tree branch and the moon. And he gives the whole thing this really atmospheric feeling, reminding us that there is something mysterious and a little wild about the night and the moon. The four children—two girls and two boys—are a bit pretty, especially the girls, but we can happily forget that as they strike kid poses and flop around and goof off. (See Sendak’s brilliant work showing how kids move and the faces they make in Ruth Krauss’s A Hole Is to Dig.)

The spreads here are flatter and simpler than in some of Sendak’s later work, though you can see hints of Where the Wild Things Are in his trees and bushes. The shapes of the house, the trees, and the shadows make new meaning out of the night, as do the figures of the children. One spread I particularly like doesn’t show the children at all, just the house, the night, and the cat.

But I am not giving enough credit to Janice Udry for her own understanding of children. What do the children do, playing outside?

"We climb the tree just to be in a tree at night.
And we make a little camp and pretend we’re on an island for the night.
We make up songs. And poems. And we turn somersaults all over the grass.
We tell ghost stories. And holler “Boo!” under the window.
We jump and jump, over and over, and higher and higher. But nobody has ever touched the moon." 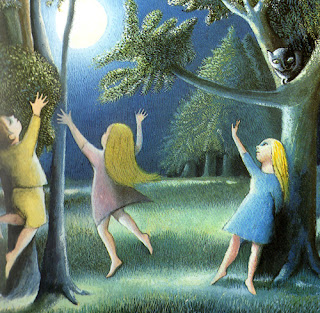 Today, even if you had four kids instead of two and weren’t afraid of them getting snatched from the yard and could get them out the door after dark, they would probably sit on the porch playing video game apps.

I hate to cite nostalgia, but it’s another good reason for liking this book. Most of all, though, I think I like it for the mood. People don’t necessarily talk a lot about that as a book illustration skill, but one reason Maurice Sendak is considered a master illustrator is because he could create a tone so distinct it was like a voice calling softly through the night.

The Moon Jumpers reminds me of that—and of catching fireflies when I was a child in my grandmother’s backyard.
Posted by KateCoombs at 3:49 PM

These books all look fantastic. I think my kids would especially love The Beetle Book. Thanks!

You're welcome, Dena! Go, beetles! (And Beatles. Can't forget them.)