A Review of Pod by Stephen Wallenfels

Gritty-cool. That's the term I've decided on for Pod. This book pulls off what all kinds of alien invasion and action films have failed to achieve in recent decades: it's the ultimate sci-fi suspense thriller. All this without ever showing us a single alien—just their ships. 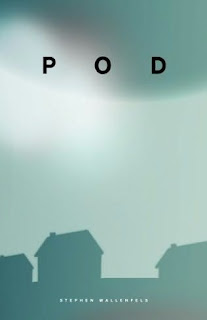 There are two stories in Pod as we follow a couple of kids whose lives implode when the aliens come. Josh, apparently a high school sophomore, is living a happy suburban life with his parents in a town near Seattle, only his mother is away at a medical convention in L.A. Then early one morning, Josh is woken by a horrible screeching noise and all of the radios and TVs in the house lose power. He and his father see a huge black pod descend from the sky. More pods descend, until they can be seen floating in every direction. Beams from the pods start to disintegrate all of the cars and trucks. Next the newspaper girl, who is running towards Josh, is gone in a flash of blue light as Josh's father holds him back from going out the door to help her.

Cut to Los Angeles, where twelve-year-old Megs is living a very different life from Josh. She and her mother have a car, but that's about it, ever since they ran away from the mother's abusive boyfriend. Megs's mom talks big, though it's pretty obvious she's making it on prostitution gigs. On this particular morning, she goes off with a man she's met, leaving Megs in the car, which is parked in a hotel parking garage. She promises to take Megs to Denny's when she comes back and blows her a kiss, telling her to lock the doors. Only not long afterwards, Megs hears a terrible screeching sound, and all hell breaks loose.

From there, we go back and forth from Josh to Megs, watching how they react to the situation in which they find themselves, now that anyone who goes outside will be disintegrated. In many ways, Megs's experience is the more horrific, since a group of thugs led by the chief security guard takes over the hotel and terrorizes the occupants under a pretense of creating order. Megs continues to hide in the parking garage, where she creeps from car to car, trying to find food and water. Unfortunately, two of the hotel thugs also come to the garage, looking for valuables in the cars. They become aware of Megs's presence, and she must play her already awful game of hide and seek even better. Megs has found a kitten, and even though she knows she probably shouldn't, she tries to keep it alive. Megs becomes more aware of how bad things are inside the hotel and even tries to help, especially after the kitten is captured by her enemies—whose preferred means of killing people is throwing them outside so that they will be destroyed by the alien pods.

Josh's troubles seem more subdued by contrast, but they are powerful in a quiet way. His father immediately starts worrying about water and supplies, becoming increasingly obsessive about counting every bite of food in the house. He and Josh bicker as they consider the future, if there is a future at all. And should they eat the dog? If it comes down to it, should they eat each other? This portion of the story slowly grows in intensity, made all the more horrifying as Josh sees what happens to the people in the apartment building across the street.

Yet in the midst of all this, animals can roam outside without being killed, which might lead readers to suspect that the aliens are pretty much against humans and their technology. (Various aspects of technology are destroyed along the way.) Are we talking ruthless environmentally concerned aliens?

At any rate, things get worse and worse for Josh and especially for Megs. Here's a sample of what it feels like to be Megs in the parking garage:

This is my new address:
Megs Moran
Level 6 Orange
Row J, Space 12
Los Angeles, California
Here are the directions. You go to Level 6 Orange—orange because all the levels have different colors. If you have kids, avoid the bloaters on levels 3 and 5. The smell is so bad they might puke. Find Row J—you can't miss it, there's a little brown Toyota truck at the front with muddy monster tires that Richie slashed. Walk all the way down to space 12, that's two cars up from the end. If you go too far you'll be staring at three huge spaceballs. I'm next to the White Ford Focus with dangling side mirrors (be careful not to step on the broken glass—there's lots of it). Knock three times on the trunk of the blue Volvo. I'll pop out like a weasel and say Nice to see you!—unless you're Richie or Hacker, in which case I'll scream my head off. Like I did an hour ago when I woke up from a dream about Richie cutting into the trunk with a chainsaw.

FYI, Richie and Hacker are the thugs who are looking for cash, guns, and Megs, AKA "the Parking Lot Pirate." "Spaceballs" are what Megs calls the pods. Bloaters are dead bodies, of course.

I said this is the ultimate sci-fi suspense thriller, but Pod is more than that. While most suspense thrillers tend to be more plot-driven than character-driven, here the suspense is all the more powerful because Josh and Megs feel so real and important to the reader, as do some of the secondary characters.

Although this book is easily classified as science fiction and is specifically an alien-invasion story, it is also a work of dystopian fiction. Only Pod takes place right when things fall apart. (See the author's ironic use of a Ronald Reagan quote at the beginning of the book.)

The kinds of threads Wallenfels leaves hanging at the end of Pod will make you really want to read the sequel. Even small details, like the brief exposure Josh has to one of the alien rays, though not the killing kind, make you wonder what might happen next. (Megs appears to have been exposed, too.) Besides which, we get a glimpse of how the two stories could eventually tie together.

I'll confess that Pod came out nearly a year ago, but I recently got around to reading it and had to wonder why I waited so long!

Note for Worried Parents: This is tough stuff, and not just because it's easy to infer that Megs's mother is prostituting herself. The alien invasion results in numerous deaths, and this somehow manages to pale by comparison to the misery and violence unleashed by the thugs who take over the hotel in L.A. Definitely a book for teens.
Posted by Kate Coombs at 11:45 AM

I'll add this one to my list. Have you read the Chaos Walking series? (Author's last name is Ness, I think.) The first one is called The Knife of Never Letting Go and it, too, is a sort of alien/dystopian cross-over. It was good!

Karen--For some reason, the premise of the Chaos Walking books hasn't appealed to me. But I've heard good things about the series. (I find if I read too much dystopian stuff, I get positively depressed!)