A Review of A True Princess by Diane Zahler

In her debut middle grade novel, The Thirteenth Princess, Zahler retold the story of The Twelve Dancing Princesses. Now she tackles The Princess and the Pea. As in her earlier book, she takes the basic premise and runs with it, fleshing it out with additional subplots. Our story begins with a girl named Lilia who decides to run away from home. A foundling, Lilia has been raised by a shepherd. While he and his two children, Kai and Karina, love her, the man's second wife does not. Yes, it's a wicked stepmother! 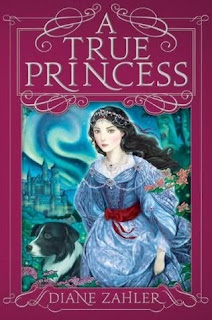 But she's only the initial villain of this piece, quickly left behind. Lilia hits the road, bringing along the blanket that was wrapped around her when she was discovered floating down the river. She is surprised but heartened to find herself accompanied by fellow runaways Kai and Karina.

The children meet some noble strangers at an inn, one of whom, a handsome young man in a blue cloak, seems attracted to pretty Karina. When he and his friends learn that the three are headed toward their own northern kingdom of Dalir, they offer the travelers advice, as well as a sword for protection. Their most important warning is to avoid the Elf-King and his daughter. And if Lilia and her siblings run across Odin's Hunt, they must cover their eyes or they will die. Even so, encountering the hunt will mean that their lives will change in a big way.

Sure enough, as the kids travel through the forest, they are attacked by bandits and get lost. In an encounter with the Elf-King, they end up forfeiting Kai, but at least Lilia is able to make a bargain for perhaps regaining him—along with other human captives, a group of changeling children. And of course the girls manage to run into Odin's Hunt before leaving the woods!

Karina and Lilia next make their way to the palace at Dalir, where they find work and meet the noble strangers yet again. It seems the prince is looking for a bride, and each supposed princess who comes to visit must spend the night in a mysterious room. On a hunt of their own, Lilia and Karina decide they have to search that room...

Lilia is a courageous girl, especially in her determination to save Kai and the changeling children. Karina is quieter, but makes a nice best friend for Lilia. The tone of this book is cheerful and even funny; one amusing touch is a pamphlet owned by one of the palace maids called How to Tell a True Princess. Its tips provide the chapter titles for Zahler's book, mostly presented in tongue-in-cheek opposition to the events of the story: "A True Princess Does Not Eavesdrop," "A True Princess Does Not Perform in Public," "A True Princess Moves with Measured Grace." And so on!

I also like the inclusion of a helpful brownie-type character called a nisse (from Scandinavian folklore, also known as a tomte). He's gruff, but he comes through for Lilia and Karina when they're dealing with the Elf-King.

The plot is predictable at times and relies on a couple of coincidences, but A True Princess is still a fun, fast-paced read, a happy addition to the growing canon of fairy tale retellings. You will no doubt enjoy seeing how Lilia puts the famous pea in a decidedly secondary role in this adventure with a touch of romance. I recommend the book for 9- to 11-year-old girls who like fairy tales and intrepid heroines.
Posted by Kate Coombs at 9:51 PM