A Review of Trickster's Girl by Hilari Bell

This book is going to make you want to get on a motorcycle and take a road trip to Alaska, which, coincidentally enough, is pretty much what the author did when writing Trickster's Girl (though maybe she drove a car). 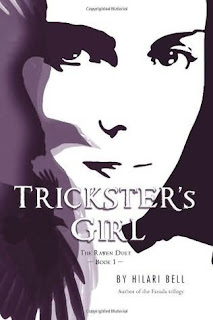 Now, we've seen a lot of dystopian YA fiction over the past few years, but it doesn't often include fantasy elements. Bell comfortably marries a damaged human future with the mythological beings who want to make things better. Well, some of them do. The rest think it would be great if all of the humans thoroughly destroyed themselves.

Even though Bell's premise, set on our planet a century from now, at first glance seems environmental, it also includes terrorism: someone has unleashed a biological weapon that kills off trees as well as giving people a particularly powerful form of cancer, and its influence is slowly spreading northward from South America.

Raven, that ancient trickster, decides to save the planet he finds so entertaining, so he scrounges up an unwilling recruit to run the human side of the spells needed to heal various crucial power spots (having to do with ley lines and nexuses, if you know your sci-fi/fantasy tropes). Naturally, as the book begins, Raven disguises himself as a hunky teenage boy and infiltrates a high school, where he stalks Kelsa until she agrees to listen to him.

Don't mistake this for one of those current YA paranormal romances, though. You know, where the hot supernatural guy falls hard for an oh-so-ordinary girl who is his junior by a century or two and then spends the rest of the book alternately protecting her and making out with her? Right. This isn't that book.

So Kelsa isn't interested in what Raven has to say except—her father has died from the cancer and she is not getting along with her mother one bit. To help solve the problem that killed her father, she grouchily agrees to accompany Raven to just one place. Whereupon they break into a museum in the dead of night in order to steal a medicine bag. Again, not what Kelsa had in mind! Then Raven tells her he wants her to go on a road trip to Alaska on her motorcycle. The girl has no intention of cooperating at this point, but he cleverly argues her into it.

Of course, Raven is still withholding information, like the little fact that he has enemies, beings like himself who don't want the problem fixed. And those enemies have recruited humans to stop Kelsa. That's aside from ordinary problems like what to eat and dealing with flat tires and whether they will be able to cross the Canadian border without getting caught (in a world where DNA-based personal identity cards make it hard to do that sort of thing). Or the problem of Kelsa figuring out how to work a brand-new kind of magic when she doesn't even really believe in magic except that this irritating boy turned into a raven and back right in front of her to prove it.

Little by little, Raven and Kelsa succeed, and soon the enemies' efforts escalate, till it's not certain Kelsa will live, let alone finish her part of this task. It takes the last-minute help of another kid to pull off Kelsa's final defeat of her enemies, and then the magical torch is passed to that boy, a Native American who will be the main character in Bell's second book in the Raven Duet.

One thing I've discovered in reading Bell's previous books (Goblin Wood and A Matter of Profit, among others) is that she isn't interested in black-and-white storytelling. Bell goes for ambiguity and nuance whenever she gets the chance, e.g., in a discussion of faith healing and why Kelsa's father died. Those of you who feel that fantasy is too often morally simplistic will appreciate the complex humanity of her books, including this one.

Kelsa is not always cheerful or appealing and her motives are sometimes petty, but she hangs in there and gets the job done. I appreciate seeing that her grief for her father doesn't render her saintly; far from it, in fact. I also like Bell's version of the mythological trickster figure, whom she envisions as changing names and faces over the centuries, depending on what myths the humans create.

Setting is important in Trickster's Girl, both in a solid, functional way and in a spiritual sense. Here's a sample, as Kelsa is about to heal a glacier:

Like the glacier itself, the dip was bigger than it had looked from a distance. Kelsa stared curiously, for this shallow trench was nothing like the water-cut gullies and canyons she was accustomed to, just a slightly deeper groove amid hundreds of others the glacier had carved into the mountain's stone....
Kelsa could see nothing now but a wall of white curling away, for its top was far higher than her head. It didn't look very inspiring, but this dirty snowbank was just one branch of an ice field that could be seen from space, and that even now was carving away the peaks that towered around her.

The question arises: How well does Bell's blending of science fiction and fantasy work? I think she succeeds. The science fiction is simply an extension of our modern world, with slightly more sophisticated technology and believable social/political developments relating to terrorism and other concerns. The mythology is also extended, centered around Raven and a barely glimpsed pantheon of mostly Native American gods and nature spirits.

Trickster's Girl is a focused story compared to some of the cast-of-thousands books we've been seeing, in part because the quest/road trip format gives it a fairly linear shape. It doesn't have the over-the-top intensity of something like The Hunger Games, yet it has its own quiet kind of intensity. I think you'll find it's easy to get on that motorcycle with Kelsa and head to Alaska, attempting to heal a troubled Earth with the help of an unreliable mythological being.

Note for Worried Parents: There's some peril here, with motorcycle gangs and talk of guns and drug smuggling. Trickster's Girl is pretty wholesome, albeit mature. Its intended audience is teens.
This book is due out on Monday, January 3rd. I requested a review copy from the Amazon Vine Program.

Also: My interview with author Hilari Bell is now up at The Enchanted Inkpot.
Posted by Kate Coombs at 12:02 PM

This review popped up after I got over here to say how intriguing the LAST review looks, and now I can't decide which one intrigues me more-- mythological beings going dystopian, or comedy-horror alien invasion! I will NEVER EVER catch up on all the interesting reading in the world...

Happy New Year! Guess what I got for Christmas! There are two of them and they both have the word "Runaway" in them.... ;)

Happy New Year to you, too!

I just spent all afternoon trying to arrange my TBR lists into some semblance of order (I'm not joking) and then I come here and there's this. I seriously might need to cut back on something (sleep?) so that I can read all of these books.

This sounds fascinating! I'm going to have to add this to my to-read list.

Brandy and Alison--I mostly love my TBR piles and lists, but every once in a while I feel stalked or even haunted by them!