Well, we had a huge windstorm on Thursday and lost power for two days. When I went to work, I counted 66 semis parked along a ten-mile stretch of highway, 8 of them knocked over on their sides by the wind. And that was just the northbound side. At our house, there was this bizarre intermittent shrieking sound that we finally figured out was like running your wet finger around the rim of a wineglass, only it was super loud. The wind was running its fingers over our kitchen windows! 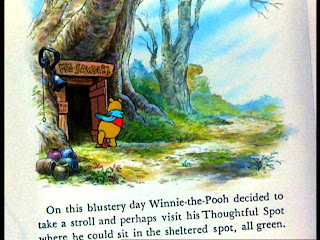 A great many large pine trees fell in my neighborhood, though fewer hit houses than you might expect. Finally we got our power back and yesterday everyone got out their chainsaws to clean up. My two brothers played lumberjack to get the tree off our backyard deck. We were told to stack all the pine branches along the curbs.

Aaand this morning we learned that there's another windstorm coming tonight, which might turn all those stacked-up branches into projectiles! So they canceled church and everyone in the neighborhood is going to try to get the branches to the dump. (There are big piles of pine branches and logs in front of a fourth to a third of the houses, depending which street you're on.)

I had no Internet this morning, but it's back on now. Still, with a nod to Winnie the Pooh's very blustery day, I think I'll wait and post book reviews next weekend! (I have some pine boughs to help load on my brother's pick-up.)

Note: The blustery day piece was actually a cartoon short from Disney, compiled from three different episodes in the Winnie-the-Pooh books. It was later incorporated into a longer film.

Update: I should have shared the poem I wrote about the windstorm. Here you go:

Wind shakes the house
by the shoulders, sobbing.
I do not know
what you want, Wind.
I cannot help you.

I have friends in NM that were telling me about the wind there too. And if someone living in Albuquerque finds the wind significant enough to talk bout it is windy. It's the one thing I don't miss about living there. But at least there are not so many trees there to cause problems.

Try not to blow away!

I'm assuming you live in Utah? I heard all about that crazy wind and those knocked-over semis. Scary. Glad you and yours are safe and sound :)

Brandy, I'm still here and the wind has died down. Hooray!

Susan, yes, I'm in Utah. We were only without power for two days, but I'm now wildly appreciative of light switches and central heating. :)