A Review of Secret Letters by Leah Scheier

This one reminds me of the Agency series by Y.S. Lee. Some people might connect it to Laurie R. King’s adult mystery series about Mary Russell and Sherlock Holmes, but I don’t know if I’d go that far. Secret Letters is the story of a girl who finds out she is not her father’s daughter; she is actually the daughter of Sherlock Holmes. In the first chapter of the book, Dora Joyce travels to London with her cousin, Adelaide (AKA Lady Forrester). Supposedly they are going to enlist the great detective’s help in getting some letters back from a man who is blackmailing Adelaide, but of course Dora wants to meet her birth father. She has actually been reading Dr. John Watson’s accounts of her father’s adventures and has taken up detecting in her country home, to the bewilderment and dismay of her relatives. 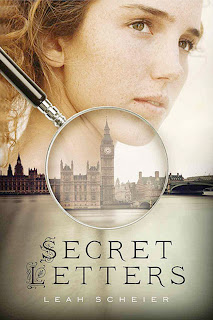 Unfortunately, Dora arrives at 221 Baker Street on the very day it is announced that Sherlock Holmes is dead. Dora swoons at the news. She is revived by a young detective named Peter Cartwright who appears to know something about Sherlock and maybe even about her. Dora and Peter are a classic clashing couple after the manner of Hepburn and Tracy. They begin to match wits, and later Adelaide hires Peter and his bumbling senior detective, Mr. Porter, to work on the blackmail case. In the meantime, Peter takes on the case of a missing young woman, Lady Rose. With some reluctance, he agrees to let Dora go to Hartfield Hall to pose as a maid and get some answers about the girl’s disappearance.

So that’s the setup, and Dora plays detective to her heart’s content, putting herself in great danger along the way and occasionally sparring with young Peter, to whom she is increasingly attracted. This is a fun read, but I found it less convincing than Lee’s series. The characters seem like actors in a play rather than real people, at least in parts of the book. At times they make choices that seem out of character. The most glaring example is when Dora sings and dances on a table in a country pub. Even though we are shown that Dora is a bold girl, her background does matter, and this particular incident seems forced and unnecessary. The breathless not-quite-romance and banter between Dora and Peter didn’t quite work for me, either. I also feel like Dora, while portrayed as a girl of action, is fairly ineffectual compared to Peter. Or rather, she gets herself into trouble being impulsive and determined, so then Peter and others have to rescue her. I expected her to be a little more cool-headed in certain ways, I suppose.

Here is a sample passage in which Peter is worrying about sending Dora off to the manor house:

When I re-entered the sitting room, Peter Cartwright was pacing by the window, chewing alternately on a cinnamon pastry and his thumbnail. The tension in his face had not eased at all; he appeared more distant and uncomfortable than before. I curtsied casually, but he stared helplessly at me without responding to my smile; even when I lisped out, “Well, Your Lordship?” [in character as the maid] he did not move.
This was not the careless boy I knew; he seemed so awkward now, so raw and restless. I wanted to call out to him, to bring him back, to shake him, to be bold and silly so that he might mock me one more time. This creeping quiet troubled me, not just because it was unnatural for him but also because I was beginning to suspect that I was actually the cause of it. Was he doubting my abilities? I wondered suddenly. Was he going to change his mind and send me home?

Still, Secret Letters is not a bad read. I think a lot of people will enjoy it very much. And it will be interesting to see what Scheier does with Book 2, especially considering that, as most readers will be aware, Sherlock Holmes is not actually dead. I liked a cameo appearance by Dr. Watson near the end of the book, by the way (he goes unnamed).

If you’re up for this premise and don’t mind a middle grade read, you might also try Nancy Springer’s books about Sherlock Holmes’ much younger sister, Enola Holmes. They’re very good.

Note for Worried Parents: This is a book for teens, and there is some talk and a little peril having to do with seduction and unwed mothers.
Posted by KateCoombs at 9:10 AM

I loved this book! A great mystery.