A Review of Oh No! Not Again! by Mac Barnett, illustrated by Dan Santat 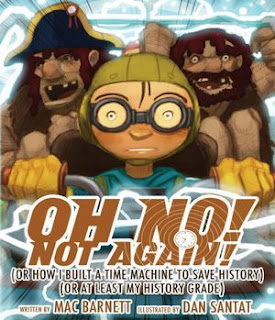 She’s back! And by she I mean the young girl who’s a scientist—okay, a mad scientist—in Oh No! Or How My Science Project Destroyed the World. This time she’s worrying about her history grade. There’s this one question about how the prehistoric cave art in France got there. It’s the only question she missed on her A-earning history test. And, being a perfectionist, she is determined to change that. “Luckily, there’s a simple solution.”

You know right there the solution isn't going to be simple! YMS (for Young Mad Scientist, though she’s not actually named in the book) goes home and builds a time machine. Her plan? “Change history so I am right.” (Which just may be the best phrase in the whole book.)

If you’ve read any Greek myths, epic poems, and plays, you’ll know that such an attitude is called hubris and YMS is in for it. Sure enough, after she gets to prehistoric France, she tries to get the cavemen to paint the walls, and they won’t. Nothing daunted, YMS starts painting the walls herself—with very funny results. (She brought spray paint and everything.)

But that’s nothing compared to what’s happening behind her back as the two cavemen go joy riding in her time machine. The ending of the book is not necessarily happy, but it’s definitely funny.

I think the jokes here may be a bit subtle for kids, but they should get a kick out of the basic plot and those cavemen. Their parents may appreciate the more complex implications. Once again, Mac Barnett and Dan Santat are a gleefully giddy team. I hope there’s a Book 3! Let’s also thank these two for making an elementary school girl a science whiz. People feeling dour about the state of the U.S. on the  current global scene should think about encouraging kids, especially girls, to go all out with math and science.

Teachers and parents might also want to have a discussion about what would happen if you really went back in time—the idea that even small changes you made could have far-reaching effects, as in Ray Bradbury’s famous short story, “A Sound of Thunder,” which spawned the term “the butterfly effect.” You could also talk about the drawbacks to perfectionism.

As in the first book, Dan Santat's exuberant illustrations suit an exuberant story. Santat's style gives a nod to animation while calling out plot points and oddball extra details in its own brash voice. Some of the artwork seems a little rougher around the edges than in Book 1, but I get the feeling that's a deliberate choice to match the rougher topic of prehistoric men.

By the way, be sure to check out the final spread with its looping time travel map, the endpapers with their time machine blueprints, and the poster on the other side of the book jacket. Even the bios on the back flap are funny. And check out the book trailer of Oh No! Not Again! (Or How I Built a Time Machine to Save History) (Or at Least My History Grade).

I’ve said it before and I’ll say it again: Mac Barnett and Dan Santat, along with Adam Rex, are the new young guns of picture books, especially when it comes to fresh and funny. Keep an eye out for their books—they may just destroy the world, but you’ll be laughing all the way.
Posted by KateCoombs at 12:19 PM

This sounds like fun! And one that Bit would really enjoy so I will be on the lookout for it.

Love this book and the illustrations are great!

Another one? I really need to read the first. I remember just staring at the other cover and just a wave of awe and jealousy over Santat's illustration. Thanks for the review (:

Brandy, Bookkm, and Adriana--I liked the first one a little better, but this is a lot of fun, too!