A New Kind of Horror

Okay, it's official: the art directors of the publishing world have lost their collective minds. Or their heads. Actually, it's the tribe of fictional main characters who have been beheaded; I just got back from the bookstore, where I saw a newish edition of Natalie Babbit's classic Tuck Everlasting WITHOUT A HEAD! 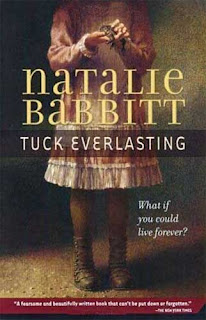 Aside from the fact that it's not exactly the height of creativity to follow this trend ad nauseum, do the powers that be not realize that the eyes have it, that faces matter in human society? And please don't tell me "This way the children can imagine the characters how they want to," since I'm guessing that's mostly a way of justifying a graphic "look." Headless cover characters are very removed from readers and viewers. They have a kind of objectivity that makes them lack warmth. To me that's adult appeal, not kid appeal. I mean, it's an adult saying "How very artistic," not a child remarking, in traditional "Emperor's New Clothes" fashion, "But why doesn't she have a head?"
Let's acknowledge that our first introduction to a main character is often a face on a front cover (and woe betide the jacket artist who gives that character a completely different hair color than the author has written!). Are we going to come across Peter Pan in flight, but with his head lopped off? He might lose his feet, too, since the full trend is simply for "torso shots." It feels like a whole slew of main characters have turned into Greek statues, or fragments thereof.
In fact, I'm starting to picture an entire world of fiction with headless people walking around, topped off by pathetic little stumps. (I just can't bear to delete their feet, creating a nightmarish multiplicity of homages to that "Come back and fight!" scene from Monty Python and the Holy Grail.)
By way of contrast, scroll down and take a look at the jacket art in today's post. All right, so the Demon Princess has lost her chin, and the girl from The Awakening appears to have found it. (Plus I harbor suspicions that the Dead Is So Last Year still life is obliquely related to the Twilight jacket art.) But then, oh bliss! We have some actual people with complete visages. Don't know if Jacket Whys would agree, but I love both the Highway to Hell and Strange Angels covers, each powerful in its own way. (And speaking of Jacket Whys, I believe she addressed the torso issue a few months back.)
I suppose that, like every trend, this one will eventually shift in a new direction. In the meantime, I'm feeling very sorry for Winnie Foster and a slew of other main characters. It's as if the French Revolution had hit the bookstore!
P.S. Oops. Just realized I wrote this entire post without once using the word decapitation. So there you have it.
Posted by Kate Coombs at 10:09 PM

At least Tuck Everlasting didn't have one of the headless behinds. For a while there, the trend was not only to chop off the heads, but to feature the model's rear end right smack in the middle of the cover.

Makes me want to write a book about the headless ones just to see what they'd do with the cover. ;)

I'm pretty sure you could make a great band name out of the words Headless and Sepia, but how?

Thanks for the blog reference, Kate. I think a lot about these cropped covers and wonder if we'd like it any better if we had whole people on covers. Like on this Tuck Everlasting cover, what if the face was there? Would all the mystery evaporate?
I've got two posts in the works that relate to other things you said here. Hopefully I'll get them posted soon.
And I'm reading Water for Elephants - this Tuck cover reminds me of that cover somehow.