A Review of Crazy Hair by Neil Gaiman and Dave McKean 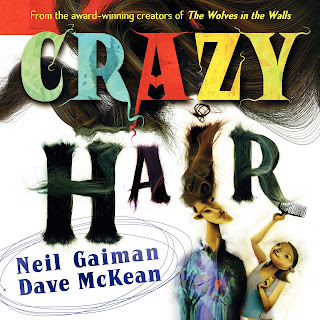 I expected Blueberry Girl to be creepy—well, I expect anything by Neil Gaiman to be creepy! And it wasn’t. But Crazy Hair is kind of creepy, although surprisingly, here we have to give far more of the creepiness credit to Dave McKean than to the author. True, Gaiman has envisioned hair so wild and untamed that it constitutes an entire fantasy kingdom. Mr. Creative has struck again: fantasy kingdoms don’t generally reside in hair. (Though the great Joan Aiken went there in her haunting short story, “Who Goes Down This Dark Road?”)
As Crazy Hair opens, we are introduced to Bonnie, a young girl, and the narrator, owner of the titular hair. Bonnie comments on the guy’s crazy hair, and he tells her all about it, saying, among other things:

Birds fly down
From everywhere
Nesting in my crazy hair.
Butterflies and cockatoos
Reds and yellows
Greens and blues
Make me look
Beyond compare
Walking with my crazy hair.

But it gets better. The narrator goes on to inform us that

Hunters send in
Expeditions,
Radio back
Their positions
Still, we’ve lost a dozen there
Lost inside my crazy hair.

(This is fondly known as foreshadowing, dear readers!) Naturally, the intrepid Bonnie will not be daunted. She whips out a comb and challenges the crazy hair to a kind of duel, despite the hair bearer’s warnings.
Now, a word about Dave McKean’s art. First of all, he makes both Bonnie and the hair owner look vaguely ethnic. Bonnie appears to be somewhere between 10 and 12, while the narrator probably falls between 25 and 35. But the star of the show is the hair, which seems so much like real hair that you will have trouble believing it’s not. Put it this way: the hair looks more real than the people or animals or anything else in the book. It’s a long, smooth, randomly wavy river about the color of my hair, a shade my mom calls dishwater blonde and I call light brown, although gold occasionally glimmers there. The hair in this book commandeers every page, twisting and twining.
McKean’s art is not cute. It’s strange and wonderful, but it isn’t anywhere close to cute. So I wouldn’t read this book to any adorable wide-eyed three-year-olds—not unless they’re the type to clamor for repeated showings of Tim Burton’s movie, The Nightmare Before Christmas. In that case, have at it! (To consider the audience question from the other end, let’s invoke the Disney movie rule: if your child is frightened by the monstrous fight scenes at the ends of most of Disney’s fairy tale movies—which used to make my cousin’s little boy cry—then you might want to give this book a pass.)
I will point out that the author seems to be quietly spoofing those books where a child solves a problem and is rewarded with a gold star or, at the very least, a pat on the head. Of course, Bonnie does get fair warning: Don’t mess with the hair! And eventually the girl receives a cheerful kind of comeuppance. It goes without saying that in an old-fashioned picture book, the person with the uncombed hair would be at the receiving end of this admonitory plot. Here I suppose the moral is “Other people’s hair is none of your business.” Or even “If you’re dying to open a beauty salon, practice on people whose hair is sane.”
Like hair, this book grows on you. I’ve already confessed my fondness for unpredictable books, and the combination of art, humor, poetry and odd plot in this one makes the cut. (Apparently the book also inspires me to start punning.) Crazy Hair is a good choice for kids who struggle to get a comb through their locks in the morning, but I do think old, bald people might like it, too. For those of you who in fact possess hair, I feel compelled to warn you that you may feel kind of funny the next time you brush your own tresses after reading Crazy Hair.
Posted by Kate Coombs at 5:08 PM

My son, who is 29mths adores this book, and indeed, rhymes most of it off. It's funny you reference "The Nightmare Before", it's one of his favourite films along with "Coraline" and "James and the giant Peach" (budding Harry Selick fan)I adore reading this book to him and my nieces and nephews. I think children really appreciate a break from the saccharine sweet Disney fodder they are expected to swallow - like the fairy tales of old, they sometimes prefer something a little darker.

Your son has good taste! Have you visited the blog Kinderscares? Might be right up his alley! :)