It's like one of those pro wrestling smackdowns. In one corner, we have the Blazing Blogger, apparently a stay-at-home mom with a toddler at her knee and an infant in her arms. She wields a mean board book, so watch out! In the other corner, we have Boudica the Book Reviewer (formerly known as Boadicea—check an actual encyclopedia, not Wikipedia, please). Her weapon is an ARC, but paperbacks can be deceptively powerful, so go ahead and hold your breath.

Is there trash talking? Why, of course!

Blazing: Hey, I have a master's degree in library science!

Boudica: But, those children...

Blazing: They're props. I borrowed them from a neighbor.*

Boudica: You're still not one of Us.

Blazing: If, by Us, you mean avid readers with intelligent opinions, am too.

Boudica: Did you sit through graduate-level classes about Othello's childhood?

Blazing: Worse. Post-modern feminist influences in Lord of the Flies.

Hearing this, Boudica recoils, but she soon recovers...

We'll leave these warriors to their blistering repartee and their book-shaped facial slaps. What is it that has had both the folks commenting on Roger Reads and the ones discussing blog-related issues in the Kidlitosphere community up in arms this summer? Two major questions: (1) Is a blogger qualified to talk about children's books, let alone create an actual Review? (2) Are bloggers unduly influenced by publishers and—even more alarming—by PR/marketing types slinking around in raincoats like flashers? 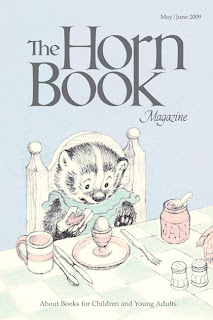 The discussions were lively, somewhat troubling, and perhaps overly earnest; they were also intelligent. The following are some of the critiques of (children's book) blogging as I recall them:

1. Bloggers take money out of the mouths of professional book reviewers.
2. Bloggers rely almost entirely on Personal Taste, a dubious criterion.
3. Bloggers are self-selected, which means their qualifications vary wildly.
4. The so-called "love of books" is a tawdry excuse for writing something which falsely resembles a book review.
5. Bloggers are obsessed with seeing their words in a public forum. It's the same kind of self-promotion you see on MySpace and Facebook, only with books involved.
6. Bloggers are bought and sold by marketing reps and publishers (think politicians and lobbyists).

Then there are these concerns:

And my personal favorite:

10. Kidlit bloggers only read each other's blogs. Since nobody out there is listening, who cares?

Nevertheless, for better or for worse, many see bloggers as a rising voice in the world of publishing. Here are some of the pro-blogger points:

--Bloggers are people who love books and talking about them, so they promote literacy. In fact, some bloggers specifically campaign for literacy.
--On a related note, blogging creates a giant, international book club. The more people who talk about books, the better.
--Book reviewers and bloggers are on the same page (pun obviously intended). They should unite to defend books against the encroachment of video games and their ilk.
--Loving books is not, amazingly enough, a Bad Thing that should disqualify one from speaking about specific books with any degree of intelligence. It is even suspected that professional reviewers love books!
--ARCs are simply a way for bloggers to get their hands on books. Most bloggers don't lie about which books they like just to please publishers. (Same thing with giveaways and blog tours, at least in my experience. Send me stuff at your own risk, Paulie PR!)
--Bloggers write for people who read books, not for publishers and their marketing departments. They're just as happy if you get a book at a library as at a bookstore.
--Bloggers have range and creativity; being independents gives them a kind of "Emperor's New Clothes" freedom.
--Bloggers bring a variety of fresh voices to a sometimes-stagnant dialogue about children's books.
--Then again, many of the best bloggers talking about children's books are librarians. Essentially, they're drawn from the same pool of talent as the professional reviewers.
--Even the much-maligned "Mommy Blogger" is often a bright, well-educated individual with actual thought processes. (Pregnancy doesn't destroy that many brain cells. And it's an urban myth that a woman's college degrees burst into flames when she brings a baby home from the hospital.)
--The difference between "I personally liked this book so maybe you will, too" and "Here's a literary analysis of this book" is fairly clear.
--As in any field of endeavor, ethical, talented bloggers tend to stand out.

I will note that this debate parallels last fall's debate about the Newbery selection process, boiling down to the great question of literary vs. commercial publications, or rather academic vs. popular taste. The final selection, Neil Gaiman's The Graveyard Book, is a more-than-fortunate blend of both. (I have since been amused by all the swooning librarians who are enchanted by Gaiman's accent and neo-Byronesque smolder. I was even more amused by James Kennedy's faux Newbery challenge!)

In addition to considering points of logic, we should consider outcomes, the true targets of this uneasy talk about blogging. Perhaps the most worrisome outcome is that bloggers are being quoted on book jackets as if they were reviewers for Booklist and School Library Journal and the Horn Book Magazine. Most readers don't know the difference between a pro reviewer and a possibly compromised blogger. Does that make these blogger blurbs a problem?

I would have to say no, and not because I'm a blogger. Rather, I'm a cynic. When I look around, I see a vast corporate marketing machine dominating the nation, if not the world. (Conspiracy theorists, come on down!) I'm not the only one who thinks like this, of course. What's really funny is that most book buyers don't know the significance of Booklist and School Library Journal and the Horn Book Magazine. What they do know, after hours of TV viewing, is that anyone shilling a product is probably paid to do so. At the very least, they realize that the person quoted is expressing an individual opinion. I'm guessing Mom and Pop Reader take any and all back jacket quotations and associated hype with a big old shaker of salt.

Parents are wa-a-a-ay more interested in whether the jacket art is appealing, the flap copy sounds good, and, most important, whether Johnny has the slightest interest in the book they're waving in his direction. I mean, have you ever walked through the children's section of Barnes and Noble? The opinion of a sales clerk is the only possible source of information parents seek out, and they don't always do that. (Insert fully deserved plug for independent bookstores here.)

Frankly, people who care about books are lucky when a kid will agree to buy something that's not based on either a TV show or a toy commercial disguised as a movie.

Yes, bloggers are undeniably treading on the toes of the pros. But I suspect they're not taking over the world, at least not yet. I do cringe when book reviewers talk about bloggers as if they're uneducated hicks, completely vulnerable to the machinations of book publicists. The blogs I've been reading are written by a very educated group of people who have thoughtful things to say about books.

As for me, I've never taken a children's lit class. (Just things like Faulkner, the Greek tragedies, linguistics, and education.) Mostly, what I've done is read thousands of children's books for 43 years and write a few of my own. I'd like to think that makes me something of an expert.


*PC Disclaimer: Let it be acknowledged that some librarians actually procreate, negating the need for borrowing children in order to participate in imaginary wrestling matches with book reviewers.
Posted by Kate Coombs at 7:43 AM

Yeah, Kate! Distilled, thoughtful, professional ... and published on a blog. I had to giggle about bloggers being quoted on the back of books. They aren't just limited to "pro reviewers" and bloggers. The clamor to have a celebrity's name is just as incestuous. My wish is that people who blog and publish (not post) their writing start calling themselves professional, too.

Whew! It has been quite a summer for controversy, hasn't it!

Sometimes it's all a little hard to parse because a number of book bloggers are also professional reviewers--and some are authors, too. At any rate, the conversation has been lively!

Thanks, RT! I did forget the celebrities. I will restrain myself from commenting on Madonna's so-called children's books, speaking of which. I find I don't have the slightest qualm about calling my book reviews exactly what they are, "reviews."

Susan, that's a good point! The lines are blurrier than folks on either side might like to admit. (As an author, I occasionally post news from the writing side. But I'm such a book person that blogging about books mostly feels like a discrete and whole experience to me.)

I can't believe I totally missed this summer of argument. I fit into the Mommy Blogger category, but I am also a homeschool teacher, dedicated to learning for life. I believe all reviews are based on opinion, and frankly, I have always steered away from the professional reviews, because I'm not interested in a review that slices and dices the books. I do enjoy books that explore issues. I revel in the more philosophical and language rich books, but it isn't what primarily attracts readers to books. I do believe in pointing out these books to people, but I also wonder to whom some of the more literary reviews are targeted. Reviews are not supposed to give away the whole story as many of these do.

Before I started blogging, I had already started to compile lists of books to guide my kids in their reading. I had already started sharing favorite books with teachers in my community and discussing them. I believe that an extensive knowledge of children's literature does qualify me for reviewing. If I can make it easier for teachers to find books for their students, that is reason enough to keep writing. It isn't supposed to be all about money. Do I get personal satisfaction from writing? Of course, that doesn't make it any less valid.

Minerva--"I believe all reviews are based on opinion"; exactly! And yes, "an extensive knowledge of children's literature" seems to me to be the most basic qualification for reviewing.

This argument keeps spiraling and resurfacing. I think it's an interesting outcome of the Internet with its articulate community of die-hard readers!