A Review of The Doom Machine by Mark Teague

Very few picture book illustrators end up writing middle grade fiction. Mordicai Gerstein gave it a shot with his The Old Country a few years back, and Kevin Henkes has written some well-regarded books such as Olive's Ocean and Bird Lake Moon. But it's uncommon enough that I did a double take when I saw the name of the author on this book jacket. Dear Mrs. LaRue: Letters from Obedience School, Pigsty, and Funny Farm are a few of the author-illustrator's best-known titles in recent years. He is also the illustrator of Jane Yolen's How Do Dinosaurs Say Good Night? and sequels. 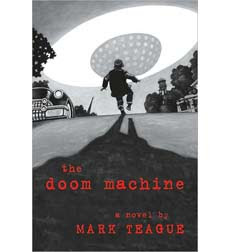 What is unsurprising, considering his picture books, is that Mark Teague would write something funny. The Doom Machine is set in a small town called Vern Hollow in 1956, and its hero is a boy who can fix just about anything, though he's prone to getting in trouble. Of course, Jack wouldn't have to spend so much time fixing cars for his Uncle Bud if the man weren't playing mad scientist in his garage laboratory. Uncle Bud is a prime example of Teague's cast of colorful characters: he built a wonderful rocket a few years back, but he financed his invention by robbing banks, so the government was not happy with him.

When a flying saucer appears in Vern Hollow, most of the residents flee in a panic (which explains the date: today everybody would get out their cell phone cameras and try to get footage to sell to Entertainment Tonight). A prim and proper scientist named Dr. Shumway has the misfortune of coming into town with her daughter Isadora just a day or two later, right before the U.S. Army shows up. Dr. Shumway initially sniffs at the idea of alien invaders, but Isadora is more open minded.

Pretty soon Jack and Isadora , along with Uncle Bud, Dr. Shumway, and the unpleasant cop Sergeant Webb and his even less pleasant son Grady, are being kidnapped by aliens. Turns out Uncle Bud's secret invention is a hot item in certain interstellar circles.

Teague gives us a good look at his spider-like skreeps, most notably Commander Xaafuun—whose ruthlessness is only surpassed by the skreep queen's. There's a lot of bickering among the aliens, which creates an amusing counterpoint to the main narrative. Jack and Isadora's madcap space adventures include encounters with other alien races on hostile planets, but ultimately they must confront their enemies on the skreep home planet.

Teague has a very good time with all this. And he offers readers a bit of a message. You may find that his portrayal of the skreeps sounds familiar, since they go around literally trashing any planet they get their claws on. They also think that they are superior to every other being they encounter, all of whom wind up working in the mines or fighting in arenas to entertain the skreeps. Ugly as they are to human eyes, the skreeps consider themselves very beautiful. Dressing to kill takes on a whole new meaning here.

The Doom Machine is an entertaining ride, especially because of characters like Jack and his uncle. Isadora is not quite as strongly drawn, which gives her sort of a sidekick feel. There were a couple of plot twists that were so over-the-top they didn't work for me, but then, the tone is pretty much tongue-in-cheek, so what the heck! This book reminds me of Philip Reeve's Larklight, except for being set in 1950s small-town America-plus-spaceships instead of Victorian England-plus-spaceships.

Like NERDS, The Doom Machine contains echoes of TV writing, but I liked it better. For one thing, the book evokes old black-and-white sci-fi movies in addition to Saturday morning cartoons. For another, The Doom Machine is simply more fresh, with funny surprises peeking out from around various corners. If your kids like adventure and humor, they just might relish Mark Teague's first middle grade novel.
Posted by Kate Coombs at 10:02 PM

Thank you so much for posting this! I had no idea Mark Teague had written a novel! I love his work. He is such a talented illustrator.