A Review of NERDS by Michael Buckley

I suppose it's inevitable that some of today's children's books would resemble TV writing, particularly the kind you encounter in Saturday morning cartoons of the post-Scooby Doo era. I first noticed this in Derek Landy's Skulduggery Pleasant, and I recently encountered it again in Greg Taylor's book, Killer Pizza. Another example is H.I.V.E.:Higher Institute of Villainous Education by Mark Walden. Now we see that shiny commercial quality in Michael Buckley's new book, NERDS. (Buckley is best known for his previous series, The Sisters Grimm.) 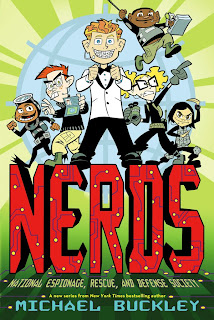 Of course, the trend is entirely understandable—not only are young readers familiar with the plot devices and characters from TV shows, but these same kids grow up to be people who write books. Having grouped the authors I just mentioned stylistically, I took a look at their backgrounds, assuming a couple of them would turn out to be screenwriters. I was oddly gratified to learn that every single one of them started off writing for film, television, or—in one case—video games.

Years ago, I talked to a producer of children's television programming because I had the clever idea I could write for TV, not to mention she knew my father. She kindly explained that most children's TV shows start out with the toys, not the plots and characters. The premise was always a packaged commodity which preceded any actual storytelling.

So you will probably know what I mean when I say that I suspect the team of fifth grade superspy nerds in Buckley's book came before his main character, Jackson Jones, or the plot of this first book in the series. Here's a description of the nerd crew from the flap copy:

Duncan "Gluestick" Dewey. He's a paste-eater who can stick to walls.
Ruby "Pufferfish" Peet. Her allergies help her detect danger and dishonesty.
Heathcliff "Choppers" Hodges. He controls minds with his buckteeth.
Julio "Flinch" Escala. His hyperactivity gives him super speed and strength.
Matilda "Wheezer" Choi. Her inhalers enable her to fly and blast enemies.

Then we have the new recruit: Jackson "Braceface" Jones, a popular kid who picked on the school nerds relentlessly until he got braces and became one of their number in a matter of hours.

Except that Jackson falls into their midst by accident, and they don't like it. Forced to train him, the nerds exact their revenge (movie allusion not necessarily intended!). After a lot of misery for our guy Jackson, in which he bumbles the training routines and ruins a couple of missions, to boot, the other kids sort of begin to consider him as one of the team. Only that doesn't happen till the tail end of the book, which means we spend a lot of page time on payback before zeroing in on the supervillain and his evil plans.

"Popular boy learns to be nice to nerds" is almost as overdone as "popular boy learns he underestimated the nerds." Here we have both. But—sigh—a lot of kids are going to like this. It may be that only cranky old fantasy readers like myself will roll their eyes at the predictability of the plotting.

Because there is a place for rollicking, TV-esque books in today's children's section, and NERDS is kinda cute. Did I tell you what NERDS stands for, by the way? That would be "National Espionage, Rescue, and Defense Society."

Now that Buckley has established his crew of young superspies, I hope his next book in the series will relax and introduce some surprises, along with more character depth. Clever plotting is not a bad place to begin, but even the most adventurous stories need to give us characters who really capture our hearts.

Note for Worried Parents: Though some of you may be pleased that the nerds are cast as superheroes, their weaknesses turning into strengths, others may be troubled by the strong stereotyping of nerds based on certain physical characteristics.
Posted by Kate Coombs at 10:15 PM