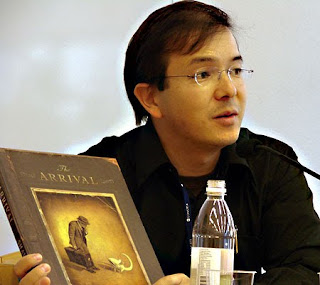 Did you watch the Academy Awards? If you did, you probably know that The King's Speech won Best Picture and Colin Firth won Best Actor. You might remember that Natalie Portman won Best Actress and Toy Story 3 won Best Animated Feature Film, while Christian Bale and Melissa Leo won for Best Supporting Actor and Actress, respectively. But the burning question would be, "Who won for Short Animated Film?"

The answer, of course, is our own Shaun Tan (along with Andrew Ruhemann). And by "our own," I mean, he's a children's book guy! This would be an author-illustrator who made a short film of his picture book, The Lost Thing, and won an Oscar. Ta-da!

Of course, Academy Awards aside, Shaun Tan has made a name for himself in the world of children's books as an innovator—to the point of being strange. Because isn't that what it takes to really go in new directions? 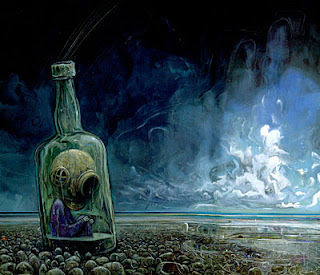 I first discovered Shaun Tan when I came across his book, The Red Tree. It's a picture book, but you would probably hand it to kids between the ages of 10 and 18, and you should seriously consider giving it to any 23-year-olds, 45-year-olds, and 88-year-olds you know while you're at it. The Red Tree is a riff on dealing with confusion, obstacles, depression, just about anything that makes life feel insurmountable. Like Pandora's box, this book ends on a note of hope. Watch for a red leaf hidden in every spread... Here's one of my favorite images (above right), which is accompanied by the words, "nobody understands."

Lucky, lucky you! Arthur A. Levine Books just came out with Lost and Found: Three by Shaun Tan, a book uniting The Red Tree, The Lost Thing, and The Rabbits in one volume. 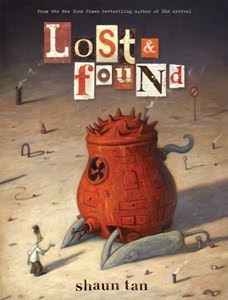 The Lost Thing, as mentioned above, is the story that inspired Tan's Oscar-winning animated short. You know all those cute old-fashioned picture books in which a sweet little child finds a lost kitten and brings it home and takes good care of it? Well, this is an out-there reimagining of that type of premise. Think E.T., only without the Bambi eyes. And really, the Lost Thing isn't an alien at all. Here's how the story begins:

So you want to hear a story? Well, I used to know a whole lot of pretty interesting ones. Some of them so funny you'd laugh yourself unconscious, others so terrible you'd never want to repeat them. But I can't remember any of them. So I'll just tell you about the time I found that lost thing.

Our narrator stops "working tirelessly on [his] bottle-cap collection" when he spies the lost thing, which looks like a cross between a giant red old-timey water heater and an octopus. Only not. Naturally, the young narrator takes the lost thing home. Gently weird comedy ensues.

When reading The Rabbits (written with John Marsden), it's probably a good idea to remember that Tan is Australian. The story has universal application, certainly, but my mind flies to an image of the British colonization of Australia—and other lands—before circling outward to picture our planet's domination and industrialization in general by wealthy nations and corporations. Yep, The Rabbits is an allegory, and it doesn't have a happy ending. Call this a precursor to The Arrival, Tan's depiction of the immigrant experience. Only The Rabbits is a much darker 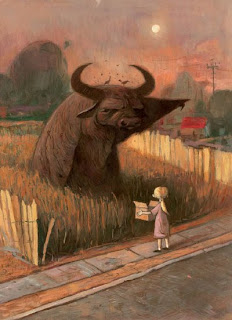 Tales from Outer Surburbia is a book of illustrated short stories, all of them odd and more or less allegorical, beginning with Tan's oracular water buffalo (see illustration, right). I'm especially fond of "Eric," a new take on alien visitors, or rather "foreign exchange students." Or "Distant Rain," which sets out to answer the question, "Have you ever wondered what happens to all the poems people write?" "No Other Country" will have you looking for your own inner courtyard, whereas "Alert But Not Alarmed" will have you finding new uses for a backyard missile. As a group, the stories are poignant, even haunting. They will leave you wondering and pondering.

Tan's masterpiece up to this point, The Arrival, is a lengthy, wordless illumination of what it's like to be an immigrant. The entire book is done in sepia tones, with the occasional use of blacks and grays. A man leaves his country and crosses the sea to make a new home for his wife and daughter. He will send for them as soon as he gets settled. He looks like he's leaving some vaguely Eastern European country and traveling to the United States or, of course, Australia, but you will soon realize that the country he reaches is not any identifiable one on our planet, but a wholly alien landscape. Except, that's what it's like to immigrate. The man's confusion, people's small kindnesses, the reasons others have left their own countries—all these and more are described in subtle, wonderful illustrations (see artwork below left). After I read this for the first time, I just sat on my couch in shock, smiling with the knowledge that someone had created such a thing, a book as touching as it is beautiful.

As an artist, Tan often works in shades of brown or gray, occasionally lit by spots of color. He uses mixed media, including acrylics, colored pencil, and collage. He is fond of depicting machinery that is neither completely contemporary nor steampunk, more like the rusting gears of a mid-priced, elderly space station one or two galaxies over. I'm guessing he wouldn't mind having a drink with Han Solo in that intergalactic bar in Star Wars, but Tan's work isn't straight sci-fi, either. Here are a few memorable details:
—The title page of The Red Tree shows a grandfather clock in a field of cut wheat or yellowing grass. A scattering of small letters is white on the grass background and gray out of frame. If you look again, you will see that the spill of letters includes a handful of red ones. These turn out to be the book title.
—In The Arrival, Tan has invented a whole new language so that you, the reader, will be confused right along with the immigrant when trying to read street signs and other public print.
—The passage of time during the ocean voyage in The Arrival is shown by a gorgeous spread which is essentially a diary of clouds.
—In Tales from Outer Suburbia, the Table of Contents is made up of postage stamps.
—You know that feeling of gloom and depression we sometimes characterize by saying someone has a black cloud over their head? Well, in The Red Tree, Tan illustrates this in the middle of a big city by having a gigantic, ugly fish floating along just over the main character's head. (Only "floating" seems like too light of a word in this context! See artwork, below right.) 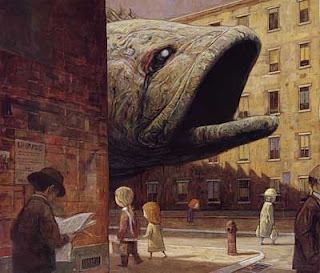 —You've never seen sheep like the ones in The Rabbits. You will never want to see sheep like that in real life. And check out how the cows, which have too many legs, are pre-marked to be cut up into meat.
—In The Lost Thing, the main character's bottle-cap collection is only mentioned once, but the endpapers depict row upon row of bottle caps.

Shaun Tan has won numerous awards, including the Hugo and Nebula awards for fantasy art and Australia's 2010 Dromkeen Medal for his contribution to children's books. Check out his biography on Wikipedia for a complete list.

For most people, even the talented ones, creativity is a gentle hum, or maybe a bee-buzz. For Shaun Tan, it's a roar. Not the roar of a waterfall or even a lion or a movie T-Rex. It would have to be the roar of something new, something with gears and tentacles and hair like flowers. There's a lot of great creativity out there, but only a few others strike me as working (or having worked) at this level: Andy Goldsworthy and Itchiku Kubota, for example.

The most obvious gift someone like Shaun Tan bestows upon the rest of us is the work itself, but I'm also grateful for the inspiration I get from seeing the farthest reaches of possibility (AKA Outer Suburbia). Reading Tan's work makes me want to take my own creative life to the next level. To try something new. To give out a little roar of my own.

Note for Worried Parents: Shaun Tan's work is not for small children. It's thoughtful and mature, even a little dark. But it will inspire some rich conversations with older children. My suggestion is 10 and up, or, depending on the child, 12 and up.

Also: I recommend you go to the "Books" page of Tan's website and click on The Arrival, then read his explanation of how he researched and created the book. It really adds to the reading experience to learn about some of his thinking during the process.

Update, 3-29-11: Shaun Tan has won that highly prestigious international book award, the Astrid Lindgren Memorial Award. As well he should!

Update, 4-7-11: Here are Betsy Bird's thoughts on Shaun Tan's win at Fuse #8, along with a link to the author-illustrator's video response.

Update, 4-26-11: Another nice interview, with the rather cool info that Shaun Tan was a concept artists on Pixar's WALL-E. No wonder that movie looked so great!

YAY! This suddenly reminds me that I don't actually own any Shaun Tan and my birthday is coming up. MUST ADD TO WISH LIST...

I hadn't even paid any attention to the Oscars and now I wish I had. I LOVE Shaun Tan's work. I didn't even realize that The Lost Thing was nominated. I've been wanting to see the short forever. Has anyone seen it? I've only seen the trailer...and of course read the book.

Amy--Definitely! The three-in-one is a great find, but then, speaking of MUST, you cannot spend another year without The Arrival!

Cat B.--I tried finding it on YouTube, but only got the trailer, too. I'm guessing it has to be bought, like another short film I looked for a few months back.

Shaun Tan's short "The Lost Thing" is available in the U.S. on iTunes for $1.99. We have a local movie theater that shows the Oscar-nominated shorts every year, so I first saw it there.

Shaun Tan's work has inspired me to create the work I want to create and stop conforming to the norm. I've always wanted to create picture books that were a little "out there" for older readers, but until now I've felt pressure to make my work more "accessible." Not anymore.

Nora--Thanks for the info about getting "The Lost Thing" on iTunes! And thanks for your notes about your own creative process. As people like Tan and Neil Gaiman (with his horror stories for middle grades) demonstrate, it's really mostly a question of whether you can pull it off. If it works, and not only works, but shines, the rules tend to fall by the wayside.

Shaun Tan is my absolute favorite. His art is great for inspiring poetry ideas among middle grade students :).

Caitlin--What a cool idea! I hadn't thought of using his art as poetry prompts, but now I'll have to try it. Thanks!