The Loss of Diana Wynne Jones 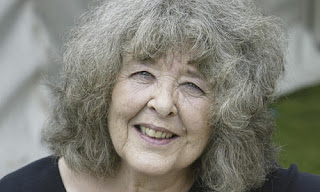 I woke to the news that Diana Wynne Jones passed away night before last. (Thanks, Charlotte's Library.) Due to some random difficulties I will not get into, I will not be posting reviews this weekend, but I really must acknowledge such a tremendous loss to the world of children's literature in general and fantasy in particular.
Did you know that Diana Wynne Jones was a major influence on Megan Whalen Turner as well as Neil Gaiman? (Um, and on me?) She actually hooked Megan up with her editor at Greenwillow.

And yes, there's a reason Diana received a Lifetime Achievement Award from the World Fantasy Association in 2007. 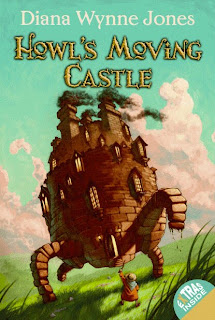 Diana's fantasy is known for its humor, its intricacy, and its creativity. Perhaps you're familiar with her book, Howl's Moving Castle, which was made into an animated feature film. And who else has ever used a conga line as a magic weapon, as in her adult fantasy novel, A Sudden Wild Magic?
Here is my detailed post about Diana Wynne Jones and her work, "The Queen of Children's Fantasy," from a year or so ago. See also my review of her book, Enchanted Glass, which was published last year.
Good-bye, Diana. You will be missed very much.
Note: Look for one last book, Earwig and the Witch (for younger readers), this fall.
Update: Two more links from Charlotte, an obituary in The Guardian and thoughts from Neil Gaiman. See also Amy's thoughts at Amy's Library of Rock.

Really good update: Judith of Misrule has compiled an extensive list of links to obituaries and musings on the great Diana Wynne Jones. Thank you, Judith!

4/13/11 update: We have a Diana Wynne Jones tribute post up at the Enchanted Inkpot. (Thanks, Grace Lin!) You can stop by and leave your own thoughts about Ms. Jones in the comments.
Posted by Kate Coombs at 6:27 AM

I got tears in my eyes reading this (and so many other tribute posts to Ms. Jones). She will be sorely missed.

It's hard to believe she's gone. I read Dogsbody when I was twelve and have been a rabid fan of hers ever since.

She will really be missed. I was so sad when I found out about the news. I'm now reading the Dark Lord of Derkholm because it feels like the right time to read something of hers.

Isn't Dogsbody wonderful? Well, I like most of her books a whole lot, and even the ones that bug me a little are pretty darn good!

Like K.C. said, it just seems strange that she's gone.

Good idea, Chachic! That will make a nice memorial activity. (And her books are eminently rereadable!)

Oh...this is nice to read just to share being sad with other people. I'm just flattened.

Oh, dear! I knew she was sick, but oh! how sad. She is one of the great ones.

Rebekah--"Just to share being sad"; very well put. There are many authors I miss now that they're gone, but DWJ has held a really strong place in my heart for many years. "Flattened" is also right.

Kim--I can only think of a few writers of her caliber and contributions. "One of the great ones" indeed! It's the end of an era.