A Review of Entwined by Heather Dixon

What a real and personable world Heather Dixon creates in this book! Hers is the fifth retelling of "The Twelve Dancing Princesses" to come out in the last four years, but it is nevertheless a standout. (See my post about three of them. You can also check out the Once Upon a Time version, Suzanne Weyn's The Night Dance. I believe still another version is due out next year!) 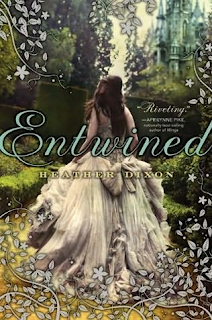 even princesses hid in the rose bushes to watch the Yuletide ball while their mother was upstairs, awaiting the birth of her twelfth daughter.

They had fallen asleep right there in the rose bushes, burrowing together like mice. When the girls were discovered missing, Mother had stopped the ball and made everyone—including the musicians—search for them. Prime Minister Fairweller had found them. Azalea had awoken in shivers to see him holding a lamp over them and frowning.
The girls had pelted him with snowballs.
They had lost two weeks of dance lessons over the Great Rose Bush and Snowball Scandal. It had been worth it, they all agreed.

Now Azalea is attending the ball herself, with her sisters no doubt secreted in a new hiding place, watching her. But none of them can feel as giddy as they did the previous year, when their mother was still alive.

In Dixon's retelling of the famous fairy tale, Crown Princess Azalea is a bit of a mother hen, trying to keep her sisters out of trouble while dealing quietly with her own grief and maybe, just maybe, taking an interest in a kindly young man named Lord Bradford. (Or is he simply Mr. Bradford, a commoner?) A case of mistaken names complicates the already subtle dance between these two would-be lovebirds, while Azalea's sisters Bramble and Clover have convoluted romantic troubles of their own.

But the true trouble comes when Azalea mistakenly opens the way to a magical place where a dark stranger named Keeper makes glittering promises, luring the girls into his web of music and dance. At first a magical sanctuary, Keeper's realm turns out to be the fulfillment of century-old curses and sorcerous ambitions.

Watching Azalea and her sisters sort through all of this is thoroughly satisfying, especially as Azalea tries to make meaning of the small clues left to her by her mother. How does magic work, and what does it mean to make a promise?

It may surprise you, then, when I tell you I suspect the most important plot thread in this book is the need for mending the rift between the King and his daughters. His long-time formality and his particular coldness after his wife's death have shaped an estrangement that the very hurt Azalea actively nurtures. Forbidding them to dance is only one of the rules that feel unbearable to the princesses. But this very rift with their father turns out to have created an opening for the Keeper to enter the girls' lives and work his wiles.

Blackmailing Azalea to break his enchantment, Keeper becomes increasingly dangerous. As Azalea comes to realize her peril, she scrambles to protect her family, but the threat has grown beyond her control, and she is hard pressed to save her sisters, her kingdom, and herself.

Fortunately, she and her sisters have allies, not to mention an invisibility cloak that comes in handy at a crucial moment or two. And don't forget the enchanted tea set (though I'm still trying to figure out the precise shape and purpose of the part of the set referred to as "sugar teeth").

Azalea and her sisters are a terrific bunch whose loyalty, humor, and personalities give even the drafty, mysterious palace a feeling of home. The whole book has a nicely Edwardian feel, or perhaps it's Victorian. I'm not surprised to find out that Entwined has already earned three starred reviews from major review sources. I think you'll like these girls and their story very much.

Note for Worried Parents: Although Entwined is aimed at teens, it is wholesome enough for younger readers, probably 10- to 12-year-olds. The only real problems would be the deeply menacing gothic villain and some brief references to sensual attraction.
Posted by Kate Coombs at 9:01 AM

I want to read this (obviously, its a fairy tale retelling) but wondered how it was different from all of the other 12 Dancing Princess retellings. Thanks for the specific and detailed review. I'm even more interested now.

You're welcome! Let me know what you think if you get a chance... :)