A Review of The Iron Thorn by Caitlin Kittredge

This author isn't the first adult writer to cross over to YA, but so far she's one of the best. Steampunk, urban fantasy, alternate history, dystopian fiction, romance, gothic novel, you name it: The Iron Thorn combines the best of all these subgenres, throwing in one of those genetic ticking clocks plus an actual ticking clock that's the nerve center of an entire house made of magic-infused gears. Which is to say, if you liked Fever Crumb, Leviathan, Lament, and Twilight, you should take a look at Kittredge's new YA offering. 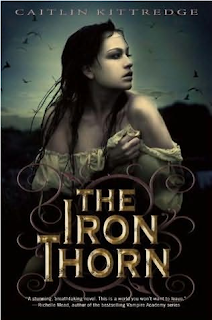 As the jacket flap puts it, "Aoife's family is unique in the worst way." Her mother has gone crazy and is in an insane asylum, while her beloved older brother lost his mind, too, nearly killing Aoife before running away.

Aoife lives in the dark city of Lovecraft, where she studies in the strict school of engineers, applying reason and science to practical problems as the city's great Engine beats like a malevolent heart beneath it all. Her fellow student and best friend, Cal, stands by her, but even he is uneasy when it appears that Aoife herself will lose her mind when she turns sixteen. The city authorities, as represented by the Proctors, also have their eye on the girl, which is a very bad thing.

Then Aoife gets a cryptic message from her brother Conrad and sets off to find him, presumably at their father's home in a village to the north. Crossing the city, let alone the countryside, is a dreadful prospect, considering the threat of death or capture from monsters like the nightjars and government spies in the form of clockwork ravens. Fortunately, Aoife and Cal find a scruffy guide named Dean, who has secrets of his own. He knows a guy with an airship, and it appears he won't sell them out to the monsters that live in the sewer system, so off they go.

The little company eventually reach the house where Aoife's father lived, only there's no sign of him or of Conrad. Of course, Aoife has never met the man. And his house turns out to be very strange indeed. That's even before Aoife has her first encounter with the fairy realm, whose denizens—most notably a fey named Tremaine—may prove to be the greatest threat of all. But Aoife, despite her growing attraction to Dean and her loyalty to Cal, will do anything to get her brother back. Anything.

This book is a thoroughly marvelous tale, one of my favorites so far in 2011. In fact, I felt that my experience of YA horror/steampunk/dystopian fantasy was refreshed by reading The Iron Thorn. I also appreciate how the main plot thread comes to a satisfying conclusion, even as new problems set us up for the next volume in this series. In addition, for those of you looking for romance, Aoife's interactions with Dean aren't cliché in the least; they're clever and bumpy and real (with Cal acting sweetly jealous, to boot).

I guess about the only thing that threw me off even a little would be the logistics of Aoife's role relative to the fey, especially her use of magic in the book's climax; however, close enough. The rest of the book more than makes up for a bit of trouble in that regard.

Here's part of Aoife's description of the marvelous clock in her father's mechanical house:

On the opposite side of the long narrow room was a leviathan clock—a full-bodied, intricate machine, much different than a pocket chronometer. As I watched, the hands swung in a parabolic arc, their wicked spiked finials grinding to a halt at twelve midnight. The chimes let out a discordant, muffled bong.
The hands swung again, and I stepped closer, watching them trail across the clock face like compass needles that had lost north, the unearthly ticking echoing loud enough to vibrate my skull. Each numeral was actually a tiny painting, wrought in delicate ink. A naked girl lying sleeping on a stone. A great goat with the body of a man sitting on a throne. A circle of figures in a dark forest who wore the sign of Hastur, the heretical Yellow King, whom cultists worshipped before the necrovirus. According to Professor Swan, and who knew where he got his stories from?
...Friendly as the library was, the clock was a monstrous thing, a machine of bloody teeth.


I know you're all wondering how to pronounce the main character's name, so I looked it up: that would be ee-fa.

Now, please get your shivers on and enter the alarming world of Aoife's Lovecraft!

Note for Worried Parents: This is a book for teens. The horror elements are pretty horrific, and there's some teen attraction with eventual kissing.

Update 8-17-11: Check out this interview with the author on The Enchanted Inkpot!