A Review of Snow in Summer by Jane Yolen

We begin with a description of an old photograph showing a little girl named Snow in Summer on the day of her mother's funeral. Her father is oblivious to the existence of his seven-year-old daughter, devoured by his grief. Only Cousin Nancy is aware of Summer and her needs. She holds the little girl by the hand, offering comfort. 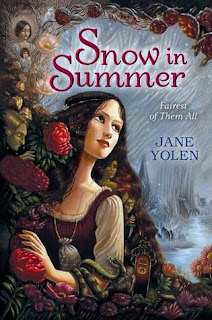 Jane Yolen's retelling of the Snow White story is eerie and immediate. The Appalachian setting adds both simplicity and strangeness as we watch the child's life changed, first by her mother's death and her father's withdrawal and later by the menacing incursion of the woman who marries her father.

Posted by KateCoombs at 9:14 PM

Sounds fascinating - taking a story that most kids would consider a story for young ones, and turning it almost in to a YA story - I bet the marketing team have had lots of discussions about how to convince older readers to pick up a story they might think isn't for them.

PBB--A lot of fairy tale retellings have been published in the past decade or two for middle grade, upper middle grade, and young adult, so the audience is basically there. I do think it's a little tougher to market to that in-between group (tweens?). I had a manuscript turned down by a publisher once for that very reason--too old for MG, too young for YA.

Wow, sounds creepy but cool. I love Jane Yolen so this will have to go on my ever-growing list.

This does sound as though it hits the button - and the cover illustration is beautiful with all the mille fiori detail.

I've been wondering if the increase in fairy tales for older readers is a reappropriation of the genre - there does certainly seem to be a return to the original stories with their multi-layered complexities and themes, some of which might be considered highly unsuitable for small people!

Marjorie--Absolutely. The picture book fairy tale is being published far less often (along with other picture books for 6- to 8-year-olds, whose parents all want them reading chapter books). At the same time, the fairy tale retelling for older kids--YA as well as MG--is on the upswing. I like how you put it: "a reappropriation of the genre." But I tend to think of it as more of a redistribution--these stories can't be killed off; they have simply found another niche or perhaps shape. It does allow for exploration of the stories' more mature themes, as you said.

I noticed your comment to Marjorie about parents all wanting their children reading chapter books. I teach in a school for the gifted & it's an issue all the way through middle school. By then, parents think their children should be into adult novels. It wasn't always easy to convince them that there are fabulous stories to read in picture books to YA. Thanks for the review of this book by Jane Yolen. It sounds very good, & since I love all things by her, it'll go on my list to read and to recommend to the teachers I work with.

Kate, Thank you for this review, and for all of your reviews. Reading today, I've just decided to point my 12 & 13 year old daughters to your blog (they're not Internet savvy yet, but what a wonderful place to begin!) to find next-books-to-read. This book looks particularly delightfully creepy! a.

I've added this to my to-read list. Thanks for the review!

Linda--Exactly! I knew of a lit professor who said that no one should read The Great Gatsby till they're 30, and I heartily concur. Why should kids miss out on all the amazing children's literature (and be bored to tears by books that aren't age appropriate)?

Amy--Oh, I'm so glad! Thank you! And "delightfully creepy" is a good way to put it.

The Pen and Ink Blogspot said...

I know this is crazy, but I can't get in to Jane Yolen. I keep trying to star a book of hers (last week it was Snow) but she's a little too dark for me. Lupe will love her.

The cover looks so sweet! I never would have pegged this for an intense, dread-filled, mature fairy tale re-telling.
Thanks for your review, it's definitely given me a lot to think about.

I don't quite agree about the cover being sweet rather than dark but I can see the point. I had already read the short story that Yolen expanded into this novel and love it better as a novel. I got choked up toward the end, which is a good sign that the ending seemed real to me and I didn't want it to be a full horror story (never do). I'm writing a paper right now for a literature symposium and discussing this book along with another great Appalachian (film) adaptation of "Snow White," and adaptations of my favorite App. tale, "Mutsmag." Might sound boring if most of you read for pleasure or help children choose books, but it's fun for literary critics and nerds like me. Thanks for the review and comments. And if anyone wants to contribute reviews on Appalachian books (new or legal reprints) to my website, let me know.

Tina, have you read Marly Youmans' books, Ingledove and Curse of the Raven Mocker? They're set in the Great Smoky Mountains. On a related note, see my Listmania list on Amazon: http://www.amazon.com/lm/R1QMK4ANF08GT2/ref=cm_pdp_lm_title_1

I, too, like the way Yolen ratchets up the suspense, yet saves our girl Snow in Summer in such a touching way. (Cute about brother #7, too!) I didn't realize it began as a short story. It makes a very good novel! :)