When Maurice Sendak and Randall Jarrell Teamed Up

The other day I was in a great little used bookstore in Salt Lake City and found a book I'd never seen before by poet Randall Jarrell, with illustrations by Maurice Sendak, Fly by Night. I brought it home to form a trio with two other books created by Jarrell and Sendak: The Animal Family and The Bat-Poet. Here's a look at all three: 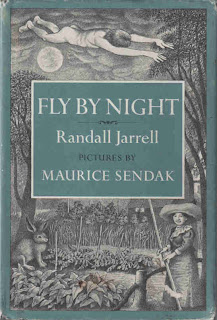 This is a fairly random piece of writing, which I suppose makes sense, considering it's about the world of dreams. Jarrell tells of a boy who can fly—or float, actually—at night. He appears to be somewhere between 8 and 10. In the first few paragraphs David seems pretty ordinary, living in a pretty neighborhood where he climbs trees with the cat. But then we learn "At night David can fly." Though apparently he has trouble remembering these dreams and how to fly when morning comes. Anyway, we follow David one night as he floats into his parents' bedroom, where he can see what they are dreaming:

He comes to his mother's and father's bedroom, and floats in over them. His father is a big mound under the blanket, with his head sticking out at the top. His mother is a medium-sized mound, but where her head should be there's nothing but pillow—she's put the pillow over her head to help herself go to sleep.

His mother and father are dreaming: he can see their dreams. Just over his father's head it's round and yellow and warm, like firelight, and his father, looking very small, is running back and forth with David on his back, only David is as big as ever. His father is panting. His mother is dreaming she is making pancakes: she pours them out, and turns them over, and piles them in a pile on a plate. Her dream is round and yellow too, but it has got mixed up with the pillow, so that the feathers the pillow is stuffed with float through her dream like snowflakes.

After David floats out of the house, the cat on the porch advises him:

Wake by night and fly by night,
The wood is black, the wood is white,
The mice are dancing in the moonlight. 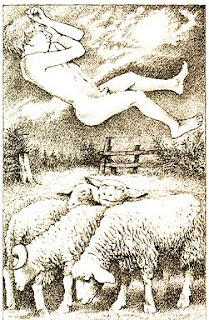 The mice and rabbits talk to him, too, and then David floats out into the woods, where he meets a female owl that takes him under her wing and back to her nest to join her nestlings till morning. This is where I came to my favorite metaphor in the book, when we're told that the owl has caught a fish which "shines in the moonlight like a spoon."

At the owl's nest, David meets the baby owls, which surprise him by being white and by having "a sad, absurd look." Then we get a long narrative poem from the mother owl titled "The Owl's Bedtime Story." (About this point you'll probably decide that the mother owl is a stand-in for David's own mother.) The owl escorts floating David home, and when he wakes up in the morning, as promised, he can't quite remember his dream. 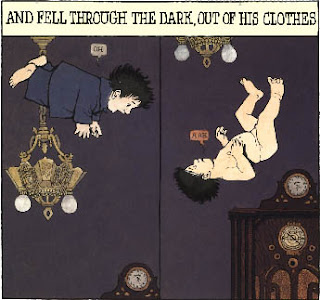 This is a solemn tale, one that probably has more appeal for dreamy adults than for kids. It also makes an interesting counterpoint to the book Sendak published six years earlier, In the Night Kitchen (1970). Compare the two illustrations shown above right, for example. I should point out that Jarrell's piece was first published in 1969, so it's entirely possible that the text of Fly by Night was one of the inspirations for Sendak's own book, In the Night Kitchen, though that book is much more jovial in tone and takes off in a different direction. Still, both books feature naked floating boys who are dreaming. Which is to say, the child in Fly by Night looks a little like Mickey five years later, still up to nighttime adventuring.

I will say, aside from the fact that a lot of people dream about being naked in an embarrassing way, there's something inherently naked about dreaming, about the way one's psyche is bared in dreams.

The nicest piece of art in the book is a full spread of David floating away home, with the owl's face filling a large piece of space on the upper right and views of a mother with a baby below left and a lamb with its mother below right, plus other interesting things like a fox, a shepherdess, two ducks on a pond, a bridge, a couple of rabbits, and some marvelous trees (all in a scene vaguely reminiscent of the old masters).

Fly by Night is an odd book, but if you're a collector of Maurice Sendak's work, let alone Randall Jarrell's, it's worth tracking down a copy. There's something sweetly surreal about this one. 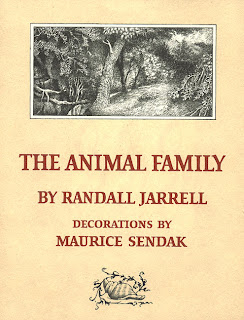 Another slightly surreal tale from Jarrell, The Animal Family, is about a hunter who lives alone on the coast of a nameless country. He has no neighbors, and he is lonely now that his parents have died. But one night he hears someone singing, and he goes down to the shore to find out who or what it is. Little by little he befriends a mermaid, teaching her his language. He tries to learn hers, but he's pretty bad at it. There's gentle humor here:

The hunter said her words awkwardly and ruefully, like something learned too late, but she said his like an old magician learning a new trick, a trick almost too easy for her to need to learn. The hunter said to her, bewildered: "You never make mistakes."

"The wrong word—the wrong sound, one you don't mean to make. The way I do. Mistakes are what 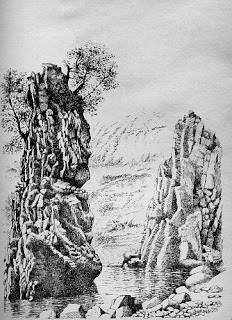 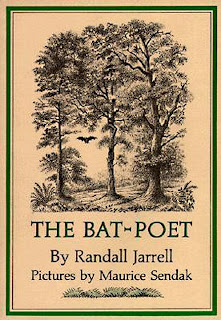 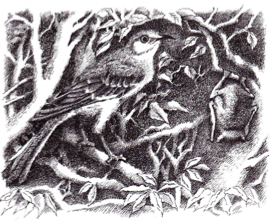 Posted by KateCoombs at 8:05 PM

I never met anyone else who knew about these books! I actually wrote my senior thesis on Bat Poet and Gingerbread Rabbit - you can even read it in the essays page of my blog (-:) I looked at the others but there was just too much in Animal Family to fit into a 20 page paper.

Oh, very cool! I think I read The Gingerbread Rabbit many years ago. Will have to look for it again, also check out your blog. And yes, The Animal Family is very dense, hypothetical thesis-wise. But my favorite is still The Bat-Poet!

These are amazing. I had no idea they existed. I appreciate this post and will have to look into these stories (out of curiosity).

Also, which little bookstore in SLC? I live near there and I'm wondering which one it happened to be :)

Nice to meet a fellow Utahn

Ken Sanders! You're welcome to come to my book launch/story time at The King's English today--11:00 a.m.

Oh, I adore The Bat Poet! I've never run across the other two, but I will seek them out. Thanks for posting this review!

You're welcome, Ruth! The Bat-Poet is still the best, but I like The Animal Family, too. Fly by Night is less compelling, but fun to see. :)

I love love love when Maurice Sendak illustrates chapter books! Have you seen MacDonald's Light Princess with Sendak's illustrations? It's not so much that the drawings seem spot on for what I imagine the characters look like, but that his style makes things more vivid somehow. I'll have to check this one out, too!

Thanks for pointing these out. I hadn't been aware of The Bat-poet or Fly by Night. Interesting essay.
Tammy
Apples with Many Seeds