A Review of Building a House, written and illustrated by Jonathan Bean

I’ll admit to having a special fondness for Jonathan Bean because he did the cover art for my two Runaway books. But I don’t need that as a reason to tell you about his new book—you’ll like this one for its own sake, as I do. 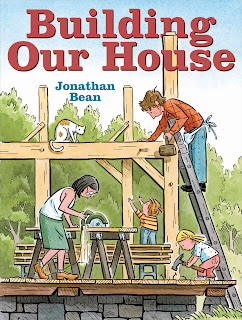 Years ago, Jonathan Bean’s parents bought an empty field and made plans to build a house. They lived in a little trailer while they worked on the project for five years. They also had three kids. As an author’s note puts it, “[They] thought of themselves as homesteaders and brought to house-building a pioneering spirit of ingenuity and independence. They decided to build a timber-frame house after reading a book on the subject….” Jonathan gives more details about the project and provides some wonderful photos. But that’s just the author’s note!

In the story itself, a family moves to a field and builds a house, but it takes them one year instead of five. They do have a daughter and a son, and another child is born while they are building the house. The book begins, “Today is moving day. We left our old house in the city and are moving to the country.” We watch them move in a blue pickup truck stuffed to the gills, driving through the countryside past a curious horse. We learn, “My family is building our new house away from the road, back down a dirt lane. Our house will sit in the middle of a weedy field Dad and Mom bought from a farmer.”

The voice in the book is that of the oldest child, a daughter. She continues to describe the project in a simple, day-in-day-out way—though there are moments of humor. One theme of the book is hard work, or more specifically setting a goal and working hard to achieve it. The narrator’s dad works in town during the week, then works on the house on weekends. We see him working at night sometimes, too. Another theme is family and community. Not only does this little family work hard for months, but different relatives and friends pitch in for certain parts of the task. For example, Grandpa brings his backhoe to dig the hole that will be the new basement, and many friends come to raise the house’s frame.

Oh, and the pickup truck has a name: Wyllis. 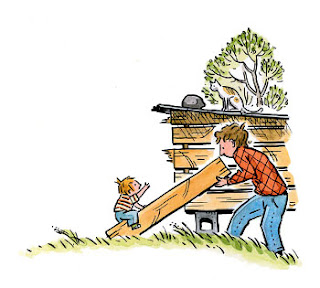 The illustrations are simple and slightly cartoon-like. What I find most impressive about this book is that the artwork is clear and beautiful in its simplicity. Browns and blues seem to dominate, but they’re supported by reds and other flashes of color. If you’ve seen Bean’s wonderful, understated book At Night, you’ll be happy to recognize his work here.

"But this year the first frost arrives early.
The cold rains fall early.
The icy winds that carry the heavy snow blow early.
The bad weather slows our work but doesn't stop it."

And we see the parents working frantically to do enough work so that the house will be safe from winter just in time. The children are young; they alternately play and help. Mostly they play. In one scene, the mom is on a ladder holding an umbrella for her husband, who is putting the roof on. The two children and their cat play beneath an inverted, tilted wheelbarrow that has been turned into a small fort. Each scene in the book, small or large, is a moment in the life of the family and in the growing shape of the house.

Building Our House will teach young readers how a house is constructed, including what materials and tools are used. More important, it will show them a family making a home.

Check out Jonathan Bean’s website.
Posted by KateCoombs at 8:16 PM