A Review of Seed by Seed by Esmé Raji Codell, illustrated by Lynne Rae Perkins

This picture book biography based on what is known about John Chapman’s life is unabashedly instructive. I’m not fond of picture books that pretend not to be preachy when they actually are preachy, but Seed by Seed is different. Codell basically says, “What messages did John Chapman and his life teach? What can we learn from him?” Then she proceeds to tell us—in a way that focuses on the “legacy” part of her subtitle, “The Legend and Legacy of John ‘Appleseed’ Chapman.”

One reason the book is successful is because of Codell’s calm poetic voice. She begins:

“When we look out of our windows,
what do we see?
Tall buildings, stores, and parking lots.
Buses and cars speeding by.
Red lights and green lights and yellow lights and white lights.
Our country is hard and electrical and moving.
But it was not always this way.
Once it was a tangle,
a tangle,
a tangle,
of roots and branches and wide tree trunks.
Once, you could not hear the engines of airplanes in the sky,
or the sounds of phones ringing.
Maybe you could catch the creaking of a wagon wheel,
straining against the ruts in the road,
or the fall of an axe against wood.” 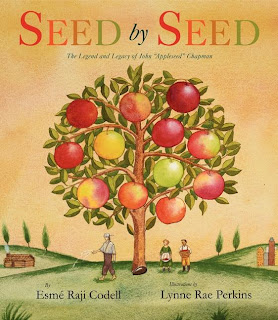 Let’s give credit to Lynne Rae Perkins as well. As these lines progress, each page shows us a brother and sister in front of a window. On the first page we look in at them. On the next we are behind them, seeing their view out the window. Both of these pages are presented in a modern cityscape. But over the next three pages, the view through the window changes, and then the children’s clothing changes, until they—and we—are inside a cabin with the cold of winter swirling in through the door. The children go outside. On the next page, the children are no longer visible but the scene is set, and we hear of the man named John Chapman, “better known as Johnny Appleseed.” Such a journey through time could have felt contrived, but thanks to the artistry of Codell’s words and Perkins’ illustrations, it is utterly satisfying.

Another page, and we learn a little about Chapman’s early life. Codell tells us that many of the things we hear about him are “three parts legend, one part fact… But the man, John Chapman, was real… born on September 26, 1774, in Massachusetts.” The author explains that Chapman was a hero because he lived by example. She says that these are five footsteps he left for us to fill:

As the book continues, Codell shows us how John Chapman taught these principles by the life that he led. I learned some things I didn’t know about Johnny Appleseed. For example, he got the apple seeds to start his planting project from cider press owners who would have thrown the seeds away otherwise. Johnny had eleven brothers and sisters. It’s said he broke books up and loaned the chapters to settlers. He was friends with both settlers and Indians and would warn either group if the other were going to attack. He was a vegetarian in an era when most people weren’t.

Lynne Rae Perkins illustrates many facets of Chapman’s life using watercolor and gouache. However, one page is done on burlap, two include woodcarving, one incorporates old book pages, and a spread near the end of the book is a piece of embroidery a little like the samplers from colonial America. The paintings show a lively Johnny interacting with settlers, Indians, animals, and of course trees. Perkins gives us nature in a world that was not yet covered over by cities, so one would expect dull browns and greens. Yet her colors are relatively bright. Although the illustrator does not actually paint in an American primitive style, I think she hints at it with those colors, the layout of some scenes, and the mixed media pieces she includes.

A note at the end of the book challenges us to do something small to make the world better. We are presented with a few craft ideas for writing and posting our plans. Codell also gives us an apple pie recipe and the Johnny Appleseed song.

The biographies I read of John Chapman when I was young were even more boring than I thought compared to a book like this. Here’s a good line to end on: “He grew so many apple trees that chances are any apple you eat today is from a descendant of a tree planted by Johnny Appleseed.” Bite into an apple—and read Seed by Seed.

Hey, and take a look at Esmé’s website, especially her blog.
Posted by KateCoombs at 7:59 PM

Wonderful tribute to the work of one of my heroes, Esme, about one of her heroes, Johnny. Thanks.

It's an inspiring book!