A Review of Cardboard by Doug TenNapel 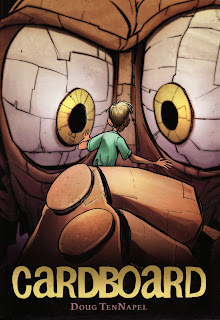 This graphic novel is an unabashedly boy book full of adventures, inventions, monsters, and chase scenes—with a bunch of pop psychology mixed in. Also a plot thread about our hero’s dad, who is still grieving over his lost wife. Cam’s dad is out of work, and Cam has to put up with the jerk next door, a rich kid named Marcus who can best be described as drugs, grease, and goth. When Marcus is not sneering, he’s bullying, either that or hanging out with his sidekick and a pet rat.

It’s Cam’s birthday, and his dad buys him a cardboard box from a creepy guy at a roadside toy booth who is obviously one of those magical types whose gifts are bound to backfire. “Wait, there are rules!” the guy tells Cam’s dad, to which savvy readers will instantly respond, “They’re going to break the rules!” Cam and his dad make a goofy-cool boxer that comes to life. Then Cam breaks the rules, Marcus gets involved, and pretty soon a lot of cardboard chaos has broken loose.

I could have done without the whole plot-as-psychological analysis and redemption with regards to Marcus. And possibly without the additional resurrection (or something) of Cal’s dad. This all leaves Cal as kind of a secondary character in his own story. However, I’ll admit there’s more to life than cardboard symbolism, and we do get a lot of great action here. The relationship between Cal and his dad is nice, too. 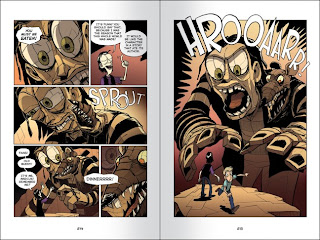 As for the artwork, TenNapel knows his stuff. He keeps the action going with strong ink lines—lots of slashing diagonals and forward motion. His palette tends to be a bit dark, with blacks, browns, olives, rusts, and grays set of by touches of brighter colors. TenNapel not only shines when it comes to large-scale action, but his way with posture and facial expressions make his characters’ personalities strong. Cam’s dad is a wonderful sad sack, while Marcus is kind of hideous outside as well as in—you can’t turn your eyes away! Cardboard is really the story of Marcus, this pathological liar that only a rat could love. (And the rat bites him.)

Still, even though TenNapel may get carried away with the symbolism, his book is so brash and over-the-top that he pretty much pulls it off. I’m guessing the 10-year-old boy you hand this one to will completely miss the psychology and just enjoy the action-packed storytelling.
Posted by KateCoombs at 6:22 AM